Over the first half of the 2013-14 season Timofey Mozgov has impressed followers of the Nuggets. His production has taken a step up and his play at both ends of the floor has impressed. In early January Nate Timmons took a look at Timo focusing on his offense after a big game against the Lakers. In this article I will analysis the impact Mozgov has had for the Nuggets defense over the first 39 games.

To help pinpoint the areas of impact for Mozgov on the defensive side the table above displays the Defensive and Four Factor ratings cross-referenced with Timofey's court time.

Rating figures are one of the best ‘result' stats available. They use points scored at either end (the statistic used to determine the game winner) standardized to 100 possessions to allow comparison. For this reason they are an excellent way to determine 'The What' of team results. However because they are team ratings cross-referenced with individuals, and not an individual rating (i.e. all 10 players on the floor effect each others ratings by their actions), they are not as useful for working out the precise impact of an individual.

To aid in overcoming this difficulty, the graph below gives a view of the Defensive Ratings (Def Rtgs) of all players when paired in lineups with Mozgov. This allows the cross effects of players to be seen more easily (as when players play together they influence each others ratings), and it can also answer questions like which players are a good or a bad match in lineups with Mozgov. Note: Players are ordered left to right by the amount of minutes per game they average with Mozgov. 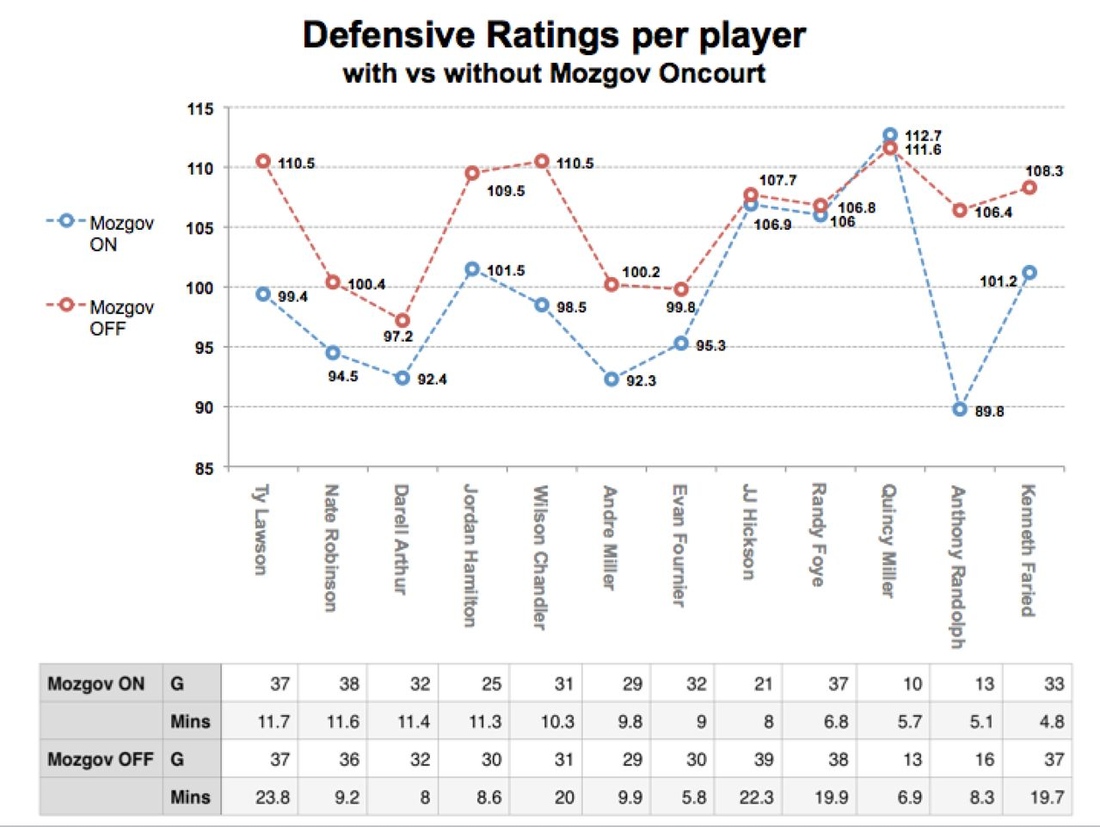 When cross-referenced with all other players the positive impact of Mozgov lineups on defensive rating holds up consistently (i.e. the blue line staying below the red). For Hickson, Foye and Miller there is no real effect (but lineups without Mozgov certainly don't perform better defensively for these players) and for the other Nuggets players lineups with Mozgov have performed better defensively.

I now turn to breaking down the Efficient Field Goal Percentages aka eFG% shown above by distance using both the percentage of team shots taken at each distance and the FG% hit (i.e. where opponents shoot and what % they hit) . If Mozgov is impacting the shooting of opponents these should be seen most strongly in the expected defensive impact areas of a center i.e. in the paint and at the rim.

The graph above shows the breakdown of where (by distance) opponents take their shots when Mozgov is on and off the floor. 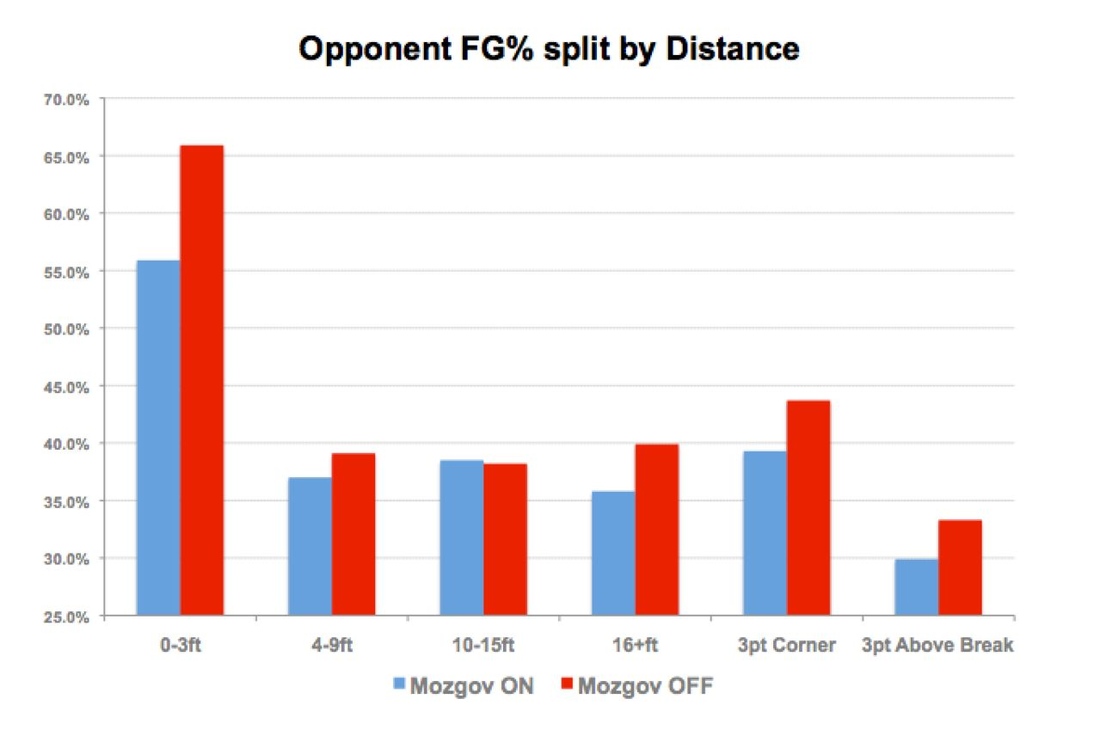 The graph above shows the breakdown of opponents FG% by distance when Mozgov is on and off the floor.

While it is difficult to isolate the total individual effect of Mozgov on opponent FG% all indications from the breakdowns above are that the improved opponent eFG% ratings are being strongly influenced by the interior presence of Timofey. Fortunately there is also another set of data that may offer some individual insight on Mozgov's inside influence and also allow some comparison with other NBA big men.

Using six cameras installed in the catwalks of every NBA arena, SportVU software tracks the movements of every player on the court and the basketball 25 times per second. The data collected provides a plethora of innovative statistics based around speed, distance, player separation and ball possession.

While teams have full access to this information they are just breaking the surface on using the mass of information recorded in every game. Earlier this season I looked at some Nuggets player insights from the SportsVU data that has been made available on NBA.com/Stats. A category I did not cover at the time but that is relevant here is Defensive Impact. 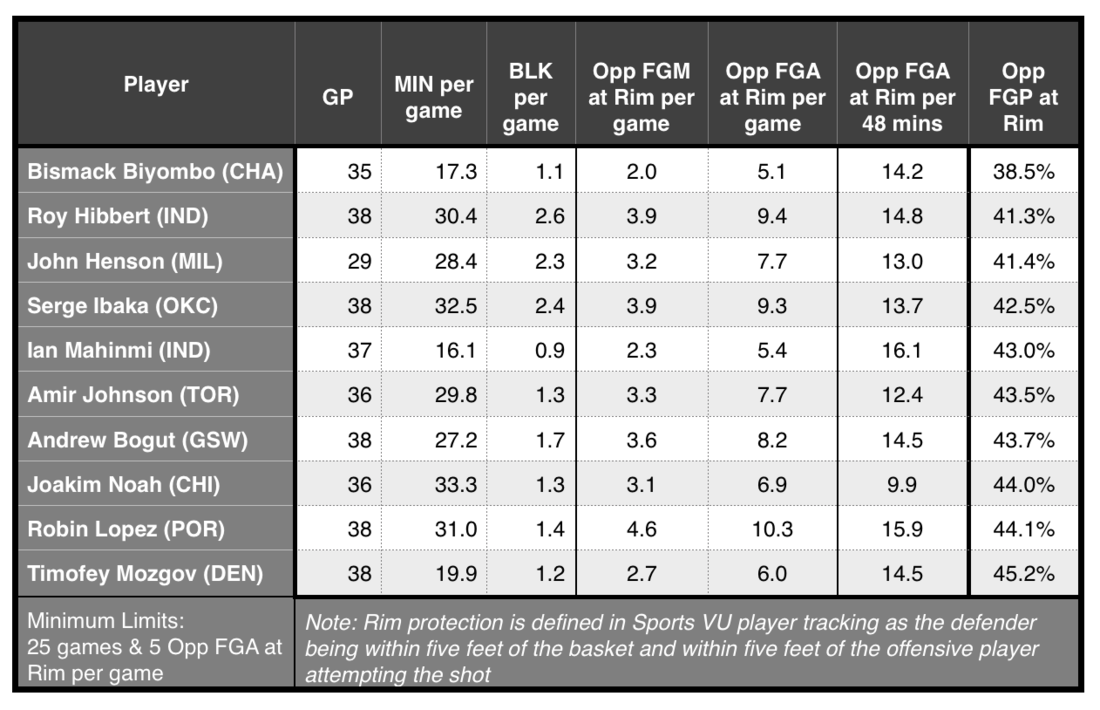 The table above shows a number of Statistics from the Defensive Impact category. The most unique categories are those on the right of the table which use distance measures to record rim protection. By limiting to a minimum of 25 games and a minimum of five opponents FG contested at the rim per game, and ranking by the opponent field goal percentage at the rim, the above top 10 in the NBA came back. As can be seen Timofey comes in at number 10 on the list placing him in the company of a number of well regarded rim protectors and indicating that the team statistical data above suggesting his effect at the rim was a big positive are backed up by the player tracking camera data.

To provide some visual examples of Mozgov protecting the inside I selected some examples of rim contests that meet the SportVU definition above, and some blocks from Mozgov's season high 5 block night against the Cavaliers. In these plays Mozgov is able to balance both his individual defensive responsibilities in covering the opposing center and his team responsibility in protecting the rim.

1. Contest. David Lee receives the ball rolling out of a pick and roll and drives to the hoop. He beats the help of Randy Foye but Mozgov contests going straight up and knocks the ball out. Kenneth Faried then tips the ball to Timofey to complete the turnover.

2. Contest. On this play Mozgov is matched up against Andrew Bogut but when he goes to the weakside Mozgov keeps his eye on the play on the strong side while switching onto Lee cutting into the paint. Lee receives the ball but Mozgov contests the bank shot and JJ Hickson is able to rebound the missed shot.

3. Contest and Block (two play sequence). In the first play the Cavs move the ball around the outside before Luol Deng receives the ball curling into the paint. He drives to the hoop but Mozgov challenges the shot (and gets an elbow to the face) which forces Luol Deng to double pump and Wilson Chandler blocks the shot. Ty Lawson recovers the ball and delivers it back to Chandler for a quick jumper on the break. In the second defensive play in the sequence Cleveland runs a high pick and roll. Mozgov drops on the play and Dion Waiters is unable to penetrate. Keeping the dribble he is able to beat Evan Fournier and drive into the paint but Mozgov rejects his shot hard against the backboard and Fournier recovers the rebound.

4. Block. In the final play Jarrett Jack is able to penetrate down the right side off a quick Waiters slip screen. Neither Randy Foye nor Ty Lawson offer hard help on the drive but Mozgov anticipates the drive well and rotates across the paint. He blocks the shot and is careful enough to direct the block downward and Nate Robinson does some quick work to keep the ball in play and tip it to Ty for a turnover to Denver.

While it is hard to quantify an individual players full impact on defense a number of different statistical measures used above as well as camera tracking data and the 'eye test' (represented here by video) indicate that Timofey Mozgov is playing the defensive anchor role very well for the Nuggets. If the Nuggets hope to reach the playoffs, and have any success once there, defense will be a key component and Timofey Mozgov may just be the key to the Nuggets unlocking their full defensive potential.