All aboard the Timofey Mozgov Express

The Nuggets' 27 year-old big man from Russia is starting to come into his own. Last night against the Lakers, Timofey Mozgov put up 20 points, 7 rebounds, 2 steals, and 2 blocks ... in just 21 minutes of action.

Share All sharing options for: All aboard the Timofey Mozgov Express

Is Brian Shaw bringing Timofey Mozgov along at a good pace or does Shaw need to amp up the playing time for his 7-footer? Consider that Moz averaged 17.1 minutes in November, 22.3 in December, and 18.3 through three games in January (10 min vs 76ers, 24 vs Grizzlies, 21 vs Lakers). With JaVale McGee on the shelf for who knows how long, is it time to move Mozgov into the starting lineup?

So far this season Mozgov is leading the Nuggets in +/- with a +67 ... meaning the team is outscoring the opponent by 67 points when Timo is on the floor. And Moz's defensive rating of 1.02 (defensive points per possession) is second best among big men, with Darrell Arthur leading the way with a 1.00 ... the two have been a good defensive pairing. When you look at Hickson's 1.10 or Kenneth Faried's 1.11 defensive rating and then compare the Indiana Pacers' Roy Hibbert's 0.99 you see where Mozgov fits into that picture with his 1.02 rating. Check out some numbers below from 82games.com: 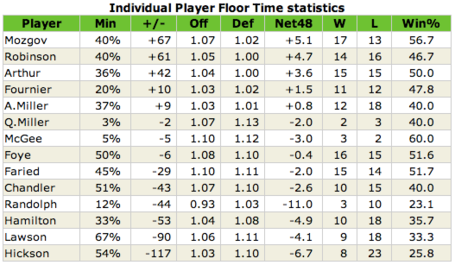 Mozgov has the bulk and length to be the defensive anchor that Shaw is searching for and he also brings a diverse offensive game. Let's take a look at Moz's shot chart this season: 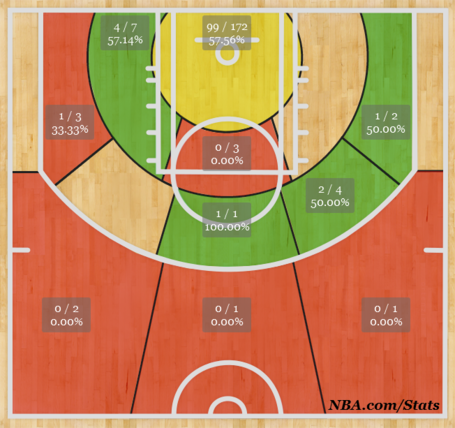 He has shown off an array of post moves, can finish with either hand, runs the floor well for a center, and finishes with authority. Add in that Moz shoots 73% from the foul line on 3.1 attempts per game - the best mark for a big with more than 2.6 attempts per game - and you have a well-rounded and emerging player on your hands.

Against the Lakers Mozgov went 8-10 from the floor and you could see the chemistry that is brewing between Moz and his teammates as various players fed him the ball. Arthur went for 6 assists in Los Angeles and four of those went to Mozgov with two of them being easy dunks. Let's check out some of those scoring plays:

A sign of the developing chemistry between Moz and Darrell aka Darth. As the announcer indicates, the Lakers tried to press the Nuggets after they advanced the ball across the half-court line, Arthur drove, Pau Gasol steps up to stop him and gives Mozgov just enough daylight to look for a rim pass, and Arthur delivers a pretty alley-oop.

Nice awareness from Moz, something that has improved as Moz is more aware of passes that could be headed his way.

Ty Lawson and Arthur run a pick-and-pop at the top of the key, Arthur receives the pass and could have taken the long jumper, but he chose to feed the post as Moz had deep position on Jordan Hill. Notice how Moz keeps the ball high, doesn't dribble (so no turnover risk), and just flips in the pretty hook shot.

When the Lakers were beating the Nuggets in the playoffs over the past few years, one of the things I loved about their big men (Andrew Bynum and Pau Gasol) was how high they'd keep the ball on offensive rebounds and in the post. You don't want to give guards the chance for steals and dribbling can also lead to undesired results. Smart play here by Mozgov.

3.) Pick-and-pop action leads to Robinson drop pass to Moz for the dunk ...

This time the pick-and-pop game is being ran with Nate Robinson and Arthur. Instead of moving into the paint and setting up in the post, Moz keeps the lane clear for Robinson to drive and dish once the defense has to honor his rim attack. Mozgov receives the pass, takes the contact from Shawne Williams, and finishes with authority. Nice hands from Mozgov - his pass receiving skills have been better this season and so have the passes being thrown to him.

4.) Mozgov good pick-and-roll defense leads to dunk on other end ...

Jodie Meeks and Jordan Hill are trying to run a pick-and-roll, but Moz doesn't respect Hill's outside game, cuts off Meeks' lane to drive, recovers back to Hill and gets a body on him on the rebound attempt, runs the floor, and follows the Evan Fournier miss with authority.

Mozgov is a big big man. He runs the floor well for a guy his size and has that rare ability to gather himself and get in on the fastbreak action as we see above. He has also shown a good ability in covering the pick-and-rolls with his sinking after the roll and ability to recover back to his man. Not asking Moz to blitz the guard has set him up for success in not picking up fouls from chasing guards and it helps the defense not get all out of sorts.

As we saw a few times last night, Gasol was giving J.J. Hickson and Kenneth Faried fits with his size. Pau is a giant power forward, but when Mozgov was on him he gave Pau fits. Here is one example where Moz's size was a huge plus as he deflected the Gasol pass that was heading to Robert Sacre in the post, play leads to Robinson setting up the running Moz for an easy alley oop.

The Nuggets pulled off a 22 point win over the Lakers and Mozgov turned in a +20 on the night in 21 minutes. Could we see consistent and improved play if Moz was moved into the starting lineup and giving more than 19.7 minutes per game?

It's hard to deny that Mozgov is the team's best center. It's time to start him.