A history of Nuggets in international play...

Share All sharing options for: A history of Nuggets in international play...

If, as assumed, Chauncey Billups makes Team USA's squad to compete in Turkey for the 2010 FIBA World Championships, he'll join a long list of Denver Nuggets alumnus to have played on basketball's international stage. 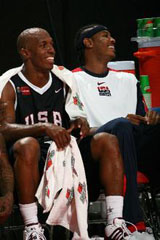 Many basketball fans forget that if Billups makes the 2010 World Championships roster it won't be the first time he's participated in international basketball competition.  In the 2007 FIBA Americas Championship, Billups was one of point guard Jason Kidd's two backups (alongside Deron Williams) and even started in one game.  Billups didn't shoot well (37.8% from the field) during the tournament, but he never missed a free throw and was a key bench contributor as the US secured a spot in the 2008 Beijing Olympics by finishing 10-0.  And you have to believe that coach Mike Krzyzewski and manaing director Jerry Colangelo were impressed enough with Billups' professionalism and leadership to bring him back this year.

Not surprisingly, the most seasoned international basketball player in Nuggets history also happens to be one of, if not the, best players in Denver's franchise history.  Melo's international basketball career started out with a thud when he was a late addition to the poorly planned and poorly assembled 2004 Summer Olympic team (thank you, Stu Jackson).  It didn't take long for Melo to butt heads with Team USA coach (and former Nugget coach) Larry Brown, with Brown limiting Melo's minutes severely and accusing Melo of having bad practice habits and a bad attitude, among other things.  But in fairness to Melo, he was only 20 years old, had no business being on that team in the first place and the entire 2004 Olympic experience was a disaster from the start.

Melo would rebuild his reputation on the international stage big-time in 2006, when he led Team USA in scoring with 19.9 ppg on 50.4% shooting en route to another disappointing bronze medal.  Melo followed up his solid 2006 performance with an even better 2007 outing during the FIBA Americas tournament where Melo again led Team USA in scoring (21.2 ppg on a very impressive 61.3% shooting).

For the 2008 Beijing Olympics, Melo showed up a bit out of shape and oddly seemed out of place for the first few games as a rejuvenated Dwyane Wade and a motivated Kobe Bryant took over much of the scoring load provided by Melo previously in 2006 and 2007.  But Melo made up for his poor shooting (only 42.2% from the field) by grabbing key rebounds and playing stingy defense when needed, and he was a key contributor on the "Redeem Team's" ability to secure the gold medal for the United States for the first time since 2000.

Kleiza hasn't had a remarkable international career but the former Nugget/now Raptor did hit the biggest single shot at the 2008 Beijing Olympic Games when his game-winning three-pointer sunk defending champion Argentina during the first round of play.  Before joining the Raptors this fall, Kleiza is expected to play for Lithuania in the 2010 World Championships as one of the team's starting forwards.

As documented recently by the Denver Post's Chris Dempsey, Nene has had a forgettable international basketball career playing for the Brazilian national team but intends on playing in this year's World Championships.  I remember seeing a visibly overweight and out-of-shape Nene thoroughly outplayed by the US in the 2007 FIBA Americas Championship.  I can only hope that he looks like his recent trim and fit self in Turkey this month. 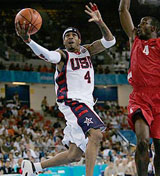 After a blistering performance on Team USA's 2003 Tournament of the Americas team (14.3 ppg on 56.2% shooting), A.I. joined the rest of Team USA by playing poorly on the dysfunctional and disappointing 2004 team that had to settle for an embarrassing bronze medal in Athens.  During the Olympics, Iverson couldn't shoot straight, evident by his 37.8% shooting from the field and his "team leading" 13.8 ppg.  Having reunited with his former head coach Larry Brown, Iverson can't be accused on not playing his hardest in Athens.  But when your roster is thrown together just a few weeks before the Olympics and your teammates include Stephon Marbury, Richard Jefferson and a very immature LeBron James, Melo and Amare Stoudemire, in hindsight the 2004 team never had a chance.

Kenyon Martin (2003 Tournament of the Americas)

Believe it or not, there was a time when K-Mart was considered by a very biased and not particularly intelligent East Coast-based media to be one of the NBA's better players (and it was that false perception that conned former Nuggets GM Kiki Vandeweghe into giving up three number one picks and mortgaging the Nuggets entire future to sign him).  And K-Mart's reputation at that time would land him on Team USA's 2003 team that barnstormed through the Tournament of the Americas in Puerto Rico.  K-Mart was a backup, but produced when given minutes to the tune of 6.2 points and 4.0 rebounds per game.

I suppose it's fitting that one of the Nuggets biggest draft disappointments ever ended up on Team USA's most disappointing team ever.  With the World Championships being held in the United States for the first time, and in the homeland for basketball of Indiana no less, Team USA folded like deck chairs and unacceptably finished in sixth place.  LaFrentz had little impact on the tournament, mustering just 5.2 point and 3.0 rebounds per game.

Several seasons before reuniting in Denver, Miller would play for George Karl as the starting point guard on the 2002 World Championship team.  Miller logged heavy minutes and ended up being the team's third-leading scorer.  Which begs the obvious question: how does a team comprised of supposed premier NBA players end up with Andre Miller as its third-leading scorere? 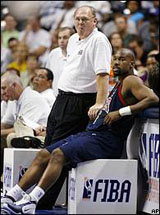 Everywhere he's been, Karl has been tremendously successful as a head coach...except during the 2002 World Championships in Indianapolis.  Granted, then-Team USA managing director Stu Jackson had no clue how to put a team together, the big stars - including Kobe Bryant, Shaquille O'Neal and Kevin Garnett - didn't participate, Jason Kidd and Ray Allen pulled out with injuries and the team was thrown together just weeks before the tournament began.  But still, a sixth place finish?  That's unacceptable under any circumstances.  Making matters worse, Karl publicly called out the team's best player, a less-than-professional Paul Pierce, and their rift would prove to be a microcosm of that team's myriad problems.

McDyess was a key member of Team USA's 2000 Olympic team that won a gold medal by the thinnest of margins.  In a semi-final thriller against a scrappy Lithuania team, McDyess's teammates found themselves down 81-80 with 43 seconds left.  Vince Carter would make a jump shot and after a Lithuania turnover, Team USA's Kevin Garnett landed at the free throw line with the opportunity to seal the victory.  After the second of two missed free throws by KG, McDyess somehow retrieved the rebound and put it in for a 83-80 US lead with 24 seconds remaining.  The US would eventually win the game 85-83, but only after former NBAer Sarunas Jasikevicius missed a dead-eye three-pointer a few inches short.

Mengke Bateer, 2002: We might have to loosen the Denver Stiffs Hall of Fame induction to get Bateer in somehow.  A true Stiff in every sense of the word, Bateer actually played pretty well in the 2002 World Championships for the Chinese national team.  Bateer has since resurfaced as a film star in China.

Tim Hardaway, 1994: Before bashing television sets as a frustrated Nugget (and bashing homosexuals as a frustrated ex-player years later), Hardaway was named to the 1994 "Dream Team II" squad but never played due to injury. 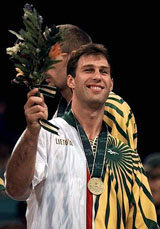 Sarunas Marciulionis, 1992 and 1988: By the time Marciulionis played for the Nuggets in 1996, he was already 32 years old and had logged way-too-many minutes playing for the Soviet Union for much of his life.  But in 1988, alongside another legendary Lithuanian in Arvydas Sabonis, Marciulionis drove Team USA and others nuts as the Soviets secured the gold medal.  Marciulionis - along with Sabonis - brought Lithuania a bronze medal in 1992.

Tracy Murray, 1991: Murray had one of the briefest of brief Nuggets careers, preceded by his inclusion on the 1991 Team USA squad that brought home the bronze in the Pan Am Games.

Bryant Stith, 1990: Like Randall, Stith had a limited impact on the 1990 World Championships but did play in all eight games.

Chris Gatling, 1990: One of the more forgettable Nuggets players in franchise history, Gatling joined forces with future Nuggets Randall and Stith on the 1990 World Championships team and had a slightly bigger impact on the team.

Stacey Augmon, 1988: Current Nuggets assistant coach Stacey Augmon was a member of "the last straw" amateur squad that lost to a Soviet Union team comprised of many professional-caliber players at the 1988 Summer Olympics.  Amateurs would be removed from international play just four years later.

Rex Chapman, 1987: One of the Nuggets two current GMs (for now), Chapman was the third leading scorer on Team USA's 1987 Pan Am Games squad that brought home a silver medal.

Jerome Lane, 1987: Popular among young Nuggets fans in the late 1980s because he was the only player who could actually dunk, Lane received the fewest minutes and didn't produce much alongside Chapman in 1987.

Tom Hammonds, 1986: A consummate role player on the Nuggets, Hammonds was a bit player on the 1986 World Championships team that brought home the gold medal.

Kenny Smith, 1986: "The Jet" was only a Nugget for a blink of an eye during the best-to-be-forgotten 1996-97 Nuggets season.  But 10 years earlier, Smith was Team USA's second-leading scorer and connected on 40% of his three-pointers for the 1986 World Championships.

Bill Hanzlik, 1980: Hanz, a 2009 Denver Stiffs Hall of Fame inductee, made the 1980 Olympic Team which regrettably boycotted the Moscow games over the Soviet Union's invasion of Afghanistan.

Michael Brooks, 1980: Brooks may not be Denver Stiffs HOF worthy, but he played for the Nuggets for all of 16 games during the 1987-88 season and was also Hanzlik's teammate on that 1980 Olympic Team.  Brooks also played on Team USA's 1979 Pan Am Games team.

Walter Davis, 1976: "The Greyhound" had a solid NBA career, a brief Nuggets career and a minimal impact alongside AD on the1976 gold medal-winning squad.

Spencer Haywood, 1968: Before blowing his career up his nose, Haywood was on track to be one of pro basketball's all-time greats.  And just like he led the ABA in scoring as a Denver Rockets rookie in 1970, he led Team USA in scoring en route to the gold medal in 1968.

Larry Brown, 1964: Decades before he would flop as Team USA's coach in 2004, Brown was a scrappy backup point guard on Team USA's 1964 gold medal-winning team.

Vince Boryla, 1948: Guess how many University of Denver players went on to be Olympians in a sport other than hockey?  I have no idea, but Boryla was one of the few of them and he won a gold medal in 1948.  Boryla would have a brief NBA career as a player for the New York Knicks and would become a successful executive with the Nuggets many years later, winning the NBA's Executive of the Year Award in 1984 after pulling off the outstanding Vandeweghe-for-Fat Lever, Calvin Natt and Wayne Cooper trade.

The Denver Chevrolets, 1950: According to USA Basketball's official site, the 1950 World Championship team was represented entirely by the AAU's Denver Chevrolets.  And in true Denver professional basketball fashion, they finished just shy of the championship, taking home a silver medal after losing to host country Argentina.