On the eve of the Nuggets' 34th NBA season, we present the second induction class into the Denver Stiffs Hall of Fame and announce the winners of our new Denver Stiffs T-shirts!

First, I want to sincerely apologize for this taking so long as I know a lot of readers have been asking where the results are. We wanted the second annual Hall of Fame induction to coincide with the launch of our new Denver Stiffs T-shirts, and the shirts took a little longer than expected. But they're here at last and a few readers (announced below) will be getting them for participating in our balloting.

That said, let's announce the results...

Bill Hanzlik (67 votes) and Ryan Bowen (50)Others receiving votes: Rodney White (49), Mark Randall (23), James Earl Ray (13), Joe Kopicki (5)Analysis: Unsurprisingly, Hanzlik dominated the forward balloting and will join Nikoloz Tskitishvili and Joe Wolf at the forward position in the Denver Stiffs HOF. Hanz's bust is being sculpted now, complete with a large mustache and shaggy hairdo. Bowen, on the other hand, barely edged out Rodney White for inclusion. I suspect Bowen made it in because he's more relevant to today's fans than White was. Others receiving votes were Randall, Ray and Kopicki, each of whom I'm confident will find their way into the Hall some day, even if they're not first-ballot caliber.

Danny Schayes (68)Others receiving votes: Dave Robisch (26), Anthony Cook (10)Write-ins: Steven Hunter (5), Marcus Camby (2)Analysis: Unlike last year when Scott Hastings squeaked by Blair Rasmussen, Schayes - the leading write-in vote getter last year - ran away with the balloting and never looked back. And frankly, I'm glad Schayes made it in. A Denver Stiffs Hall of Fame without Danny Schayes is not a true Hall of Fame.

Analysis: Gee, I wonder which Denver Stiffs reader wrote-in Anthony Carter on his ballot? For the guard spot, Julius Hodge was the clear favorite among the voters whereas Junior Harrington and Vincent Yarbrough - teammates on that memorable 17-win 2002-03 Nuggets team - seemed to alternate receiving votes, with Harrington edging out Yarbrough by less than a handful of votes. It was nice to see DerMarr Johnson get a few write-in votes, as well. This will ensure his inclusion on future Denver Stiffs HOF ballots.

And there you have it. Please join me in welcoming the esteemed 2009 induction class into the Denver Stiffs Hall of Fame. Here's how the Hall is shaping up so far...

And now to the prize giveaway! Just in time for the 2009-10 Denver Nuggets season, we're launching a few Denver Stiffs T-shirts featuring the site's logo. You can see the three T-shirts here, designed by my good friend Tobin Jones over at Crock Tees. 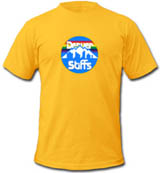 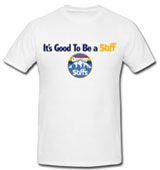 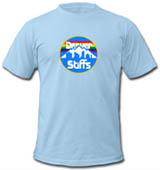 The winners are Denver Stiffs readers LACK, nohoops4u and JoelsOpinion. Each of you guys will be contacted so you can pick out which T-shirt you want. Congratulations!

That's enough looking into the past for now. Let's look to the future as a brand new Nuggets season starts tomorrow! As always......GO NUGGETS!!