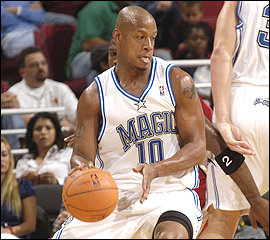 With the news that free agent shooting guard Keith Bogans has signed with the San Antonio Spurs, it got me thinking about all the rumors that have been flying around this offseason involving the Denver Nuggets. Training camp is less than one week away and the roster still has open spots ... so let's delve into some of the hits and misses of this offseason.

As free agency got underway the Nuggets needed to address a few key areas. First, they needed to decide which of their own free agents they would keep and which ones were going to be dispensable. We quickly learned that Denver was hammering out a new contract for Chris "Birdman" Andersen, as vice president of basketball operations Mark Warkentien flew to Los Angeles to meet with Bird's representatives. Birdman was deemed Denver's top priority and was re-signed to a five-year, $26 million contract.

The Nuggets quickly shored up their front court but still had plenty of options to bring in as a fourth big man ... or big man insurance. Denver flirted with power forward/center Channing Frye, formerly of the Portland Trail Blazers, but with Frye eyeing more playing time and a return home to Phoenix chose to sign with the Suns (one-year, $2 million with a player option for a second year) rather than take another bit reserve role with the Nuggets.

I liked the idea of bringing in Frye. He's young at just 26 years old, has good size at 6'11" and 245 pounds, and can stretch the floor a little better than Nene, Kenyon Martin and Bird with his midrange shooting. Frye seemed like the perfect fit, but like I've mentioned before, the Nuggets don't really have the available minutes that a young player looking to make a name for himself would want.  So, gone was Frye.

Denver, along with courting Frye, was rumored to be talking with veteran small forward Grant Hill. I shared my thoughts about Grant Hill in my "Nuggets courting Grant Hill?" piece back in July. I liked the idea of having a seasoned veteran coming off the bench, but the Nuggets talking to Hill also made me realize that Linas Kleiza's days in Denver were probably numbered.

Hill was also in talks with the New York Knicks (bargaining leverage anyone?) and of course his former team, the Phoenix Suns. Ultimately, Hill decided to team up again with Steve Nash in the valley of the sun for a run at the NBA Lottery instead of making a title run with the Nuggets (one year, $3 million with a player option for a second season).

I'll admit that both Frye and Hill deciding to sign with Phoenix over Denver confused me, maybe even irked me a little. I don't see the Suns contending for the title or even getting too close to the playoffs next year. Didn't Denver's run to the Western Conference Finals mean anything to these guys? Shouldn't chasing the title as a key player on a team be more important than waking up to 90-degree days? What in the world was going on?

Amid the Frye and Hill news came the defecting of Dahntay Jones. The "defensive specialist" took a four year, $11 million deal with the Indiana Pacers ... finally gaining some much needed career security after bouncing around the NBA and NBDL. Although I was upset with Frye and Hill for not taking the Nuggets' offers, I could not blame Jones for taking the money. Actually, I could not believe that Indiana gave him that deal. Denver struck quickly for a Jones replacement with our "official" trading partner, the Detroit Pistons, for what Denver fans hope will be Dahntay Jones 2.0, aka Arron Afflalo.

Then ... things were pretty quiet for a while in Nuggetland. But that all changed on August 10th when it was announced that Kleiza would be leaving the team to sign with Greece power Olympiakos for a dump truck full of money (two years, $12 million).

This site blew up each day with possible Kleiza replacements and even the Nuggets seemed to be more active as we started to learn that guys such as Rashad McCants, Wally Szczerbiak, Desmond Mason, Rob Kurz, Ronald Murray, and Keith Bogans had been brought in and some were even offered contracts.

As it stands now ... from the list above only McCants, Szczerbiak and Murray remain as free agents, but only Szczerbiak would serve as an adequate replacement for L.K. size-wise. All three guys are known more for their offense than anything and that is pretty much what Denver needs out of a reserve.

The Nuggets bench is a very defensive one ... Birdman, Renaldo Balkman, Anthony Carter, and Arron Afflalo all give max effort on the defensive end and all four players have limited offensive games, although Afflalo may change some minds as the season progresses. Denver's only real firepower off the pine comes in the form of rookie point guard Ty Lawson, and I have no idea how his game will translate to the NBA just yet ... the Summer League showed some good signs, but it's not the NBA.

Heading into this season the biggest question on my mind is: how will Denver's bench play? Last year the reserves were one of the strongest groups in the league. As most teams saw a drop off with starters out ... the Nuggets could actually expect to see leads protected, leads extended, or deficits chopped when J.R. Smith, L.K., Birdman, and Carter entered the game.

How will this season's squad do with the starters out? That question will be answered shortly as the offseason is coming to an end and as we all await the addition of the newest Denver Nugget from a shrinking pool of available bodies.