We're going to be taking a look at the Denver Nuggets shooting guards and what to expect from them for the coming season.

The Denver Nuggets are deep at every position and shooting guard is no different. With Arron Afflalo, Randy Foye, and Gary Harris, the Nuggets have three players that have similar skills sets. Afflalo is the expected starter, Foye should provide fire-power off the bench, and Harris could surprise on both ends of the floor as a rookie.

All three guys are used to being on the floor for long periods of time. Let's examine their key stats from last season. Afflalo with the Orlando Magic, Foye with Denver, and Harris' sophomore season at Michigan State:

**AST/TO = Assist to turnover ratio is the number of assists a player has for every turnover they commit.

As you can see from above, both AAA and Foye posted better three-point percentages on the C&S over their season averages. Shaw wants guys to take open shots and not overthink it, so this will be an important area for the Nuggets. Both Afflalo, Foye, and even Harris should see plenty of open shots this season as Ty Lawson carves up the paint, and hopefully the bigs threaten in the post to open up the perimeter, as well. Now let's go through each shooting guard and see what may be to come this season.

Arron Afflalo: He's the expected starter this season for the Nuggets, but we likely won't see him playing 35 minutes per game like he did last season in Orlando. The Nuggets will use AAA a lot and we will see him on the floor at the same time as Randy Foye, for certain stretches. Brian Shaw will be able to play a lot of different floor combinations and having Afflalo back gives the Nuggets one of the best shooting guards in the league. 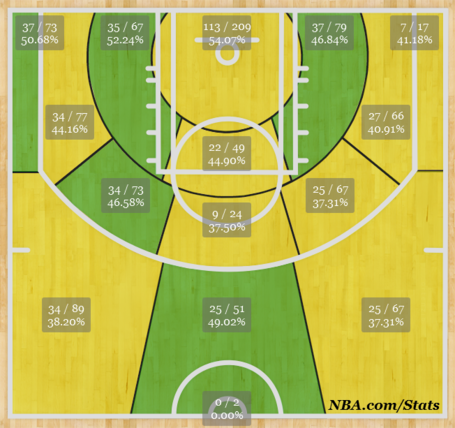 The green locations show where Afflalo was above league average, yellow indicates where he's comparable to league average, and we don't have any red areas that would indicate where he's below league average. That's pretty darn good right there. That left hand corner three-point shot will again be a primary location for Afflalo, and a spot he shot a scorching 50.68% last season. If Jeff Morton had his way, Afflalo wouldn't have that hot spot to shoot from anymore as he wants the league to tinker with that area of the floor - let's all take a moment to boo Morton and his radial ideas.

Afflalo posted an offensive rating of 99.5 and a defensive rating of 107.5, making him a net negative player of -7.5, but it's hard to post good numbers on a team that went 23-59 and gave up 102 points per game (17th in the NBA). Afflalo had become known as a lockdown defender in Denver, but that wasn't quite the case - especially in his final season with the team. He's listed at 6'5" and doesn't play like a very long guy, either. He is an active defender and he stays in front of guys well, but he isn't known for creating turnovers and posted just 0.5 steals last season.

He's still a good two-way player and will help the team's perimeter defense, but Afflalo is a better offensive weapon than a defensive one. We should see Afflalo in at the end of games as his maturity and ability will be counted on from Coach.

Randy Foye: He almost broke the Nuggets single season three-pointers made mark with 189 treys, but he fell three short of Dale Ellis mark of 192 during the 1996-97 season. Foye proved last season that he's more than just a long-ball specialist, as he stepped in and played some point guard for the Nuggets, due to injuries to Ty Lawson and Nate Robinson, and averaged 3.5 assists. Foye also gives effort on the defensive end and will be a key reserve for the team this season. Let's take a peek at Foye's shot chart from last season: 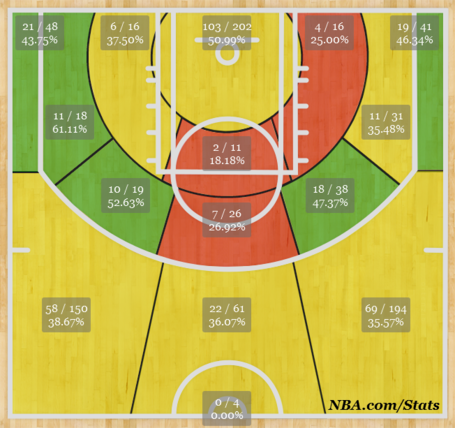 Foye was superior in the corners, pretty good above the breaks, and found mixed success inside the three-point line. He attacked the rim better than advertised, and if he can put up similar colors this season that'll lead to more success.

Don't expect Foye to average 30 minutes a night, and let's hope he is ok with a reduced role because he could be great off the bench. Foye is on the smaller side for shooting guards at 6'4", but he has made it work. His teammates and coaches credit his leadership in the locker room and having veterans like him around is always a good thing.

Expect to see Foye deliver some lob passes to guys like JaVale McGee, J.J. Hickson, and Kenneth Faried. Like Andre Miller, Foye is dangerous with his lobbing ability and will remind folks that it was he who fed Blake Griffin on his famous dunk over then Knick Timofey Mozgov: click here. If the Nuggets bench is going to be a dangerous one, it'll be Foye helping lead the way.

Gary Harris: What is the perfect situation for a rookie? Is it coming in right away, like Carmelo Anthony and averaging 36 minutes per game? Or is it best to sit and watch, like Afflalo did in Detroit as a rookie where he averaged just 12.9 minutes per game? Some of Harris' playing time could hinge on Nate Robinson's health. If NateRob comes along slowly, Foye could play some point and Harris could see time as Afflalo's backup. Maybe Shaw will choose to go big and play a guy like Wilson Chandler at shooting guard for certain stretches?

Harris showed he has defensive prowess during the Las Vegas Summer League and he also had some explosive offensive moments. It's difficult for a rookie to come into the league and be a great defender, take into account that you must know your opponent's tendencies and veterans know all the little tricks of the trade.

Learning behind two veterans that play the game the right way should benefit Harris, but nothing beats on-court experience. We will get to see how Shaw handles rookies this season and it would be nice to see Harris get some playing time, even if it's minimal.

The Nuggets have a very nice crop of shooting guards. Afflalo and Foye are probably better on the offensive end than they are as defenders, but both give effort on defense and can be play-makers. On the offensive end, AAA and Foye will be major factors for the team's three-point production. Shaw can also run plays for them with the ball in their hands or away from it. We saw creative lob plays that Foye tossed, and while Afflalo might not be the best improvisor - he is fundamentally sound. If Harris can work his way into the mix, the Nuggets will be set at shooting guard for many seasons.