Jusuf Nurkic holding his own in U20 Division B European Championships

While Quincy Miller, Erick Green, and rookie Gary Harris are tuning up their games in Las Vegas, another Nuggets rookie has been on the court over in Sarajevo, Bosnia.

Share All sharing options for: Jusuf Nurkic holding his own in U20 Division B European Championships

Las Vegas -- The 6'11", 280 pound Bosnian Bear, Jusuf Nurkic, has been putting up some eye-popping numbers during the Under 20 European Championship Division B tournament over in his home country. His team, Bosnia and Herzegovina, is currently 5-0 with a win margin of 34.4 points per game. They steamrolled Romania 96-40, but got a little competition from Portugal, winning by 9 points, 73-64.

The Nuggets' 16th overall pick has averaged 18.2 points and 12.4 rebounds in 26 minutes per game. He has even put up two monster games with 24 points and 16 rebounds against Romania (in the aforementioned blowout win) and 30 points and 17 rebounds in the closest contest the team had, again, against Portugal.

While we might marvel at some of those stats, it certainly would be more interesting if we were able to see Nurkic play here in Las Vegas, where we'd have some sense of his opponents. It's tough to figure out what to make of the B Division in Bosnia.

"It's certainly not the same level of competition [as NBA Summer League], it's a unique circumstance though because the event is in Sarajevo," said Nuggets General Manager Tim Connelly. "I think it adds a little more to the event because [Bosnia and Herzegovina] is hosting, but the level of talent is nowhere near what we see here [in Las Vegas]."

And it's not like the games here in Vegas have been exceptionally good, either. The Nuggets won their first game here by 28 points over the Raptors and lost their next two: by 27 to the Bulls and 18 to the Jazz. But there are some decent big men out here and we do get to see the games live, on television, or on any device (thanks to the handy-dandy interwebs). In exchanging Tweets with @arminiam, a Bosnian resident, even he was having trouble seeing the games as tickets to the event were sold out.

@NateTimmonsCO tried for the first game couple days ago, it was sold out lol, hoping to get some action soon, or when he joins senior squad

It would seem the games for Division B are also quite rare for the streaming audiences worldwide.

"There is very limited streaming with the B [division], with the A [division] it's easier," said Connelly. "We're going to send a guy over to be with him and to hang out with him towards the end of the tournament. We talk to him every day and we'll have a guy there the next couple days as he practices with the Senior team, as well."

Connelly has liked what he has been able to see, thus far, and he's also realistic about what he has seen.

"He has looked fine," said Connelly. "He's kind of a man amongst boys. He has been aggressive, he has done a very nice job on the glass, but we got to cut down on his turnovers and I tell him that every day."

Through five games, Nurkic has 24 turnovers, roughly 4.8 per game. He might take 4.8 per game, but that hasn't been the case as he tallied 10 in one contest, 6 in another, and 4 in his first game. We don't know what kind of turnovers he is committing, but one scouting video (not from the tournament) had some film on Nurkic fumbling away the ball on pass attempts from his teammates (video here). This will be an area that we should monitor closely.

Still, there is a lot to like about Nurkic's numbers in this tournament. Another aspect that is pleasing to the eye is the amount of fouls he draws. His big frame helps him and his willingness to be aggressive in the post. He's shooting 29-42 or 69% from the free throw line in Sarajevo. Against Portugal, he went 13-14 from the foul line.

It's exciting to think of what Nurkic could become. It's also important to temper those expectations when talking about a 19 year-old prospect. Weight training isn't the highest of priorities to European players and getting Nurkic involved with Steve Hess should do wonders for Jusuf.

"Steve is one of the best guys in the world," said Connelly. "Certainly we have the benefit of top notch training facilities and several really bright minds on our staff. Steve will be, as important, as anybody in the next couple years with Jusuf: getting his body right, showing him the importance of conditioning, and really taking care of his body."

Here is a look at Nurkic's statistical rankings through five games of the tournament and his game-by-game stats. 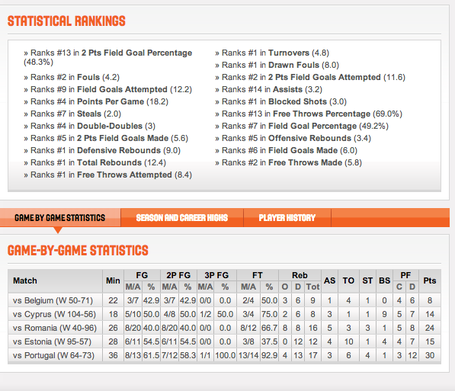