A lot of people have been asking what happened to Erick Green? Well, we have some answers.

Share All sharing options for: Whatever happened to Nuggets draft pick Erick Green?

Back on June 27th, 2013 the Denver Nuggets made a draft night trade with the Utah Jazz that brought the team the 46th pick. With that selection the Nuggets acquired Erick Green out of Virginia Tech. I had high hopes for the former NCAA's leading scorer (25 points per game as a senior) and he had a bit of an up-and-down showing at the NBA Summer League in Las Vegas.

Green has played this season over in Italy for Siena where his team is currently 20-10 in the SerieA Standings. Here is a recent post-game interview with Green where he is joking around with his trainer (the Italian Steve Hess?!?) after a big win:

And here are some stats from Green's first 36 games over in Italy:

Some game-by-game stats from Green's first 10 games over in Italy: 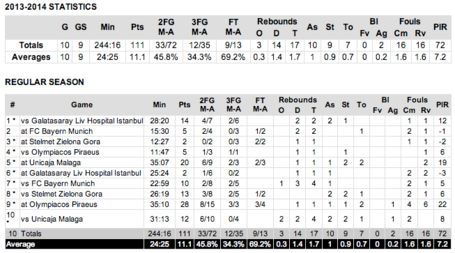 As you can see by his 28 point and 20 point nights, Green got settled in with his new team and displayed the scoring ability that found him so much success in college. I continue to be impressed by his low turnover totals, but if he is to make it as a point guard in the NBA, we'll need to see some additional assist numbers - but I'm not sure what he's being asked to do for Siena.

Denver Nuggets GM Tim Connelly has made a couple of trips over to Italy to see Green play and he shared his thoughts with us on the Colorado Sports Guys podcast back on May 12th, below are some excerpts from that podcast:

Connelly on Green's Italian team and his progress in Italy:

"He's playing for a very good team, Siena is near the top of the standings in Italy. I think it has helped him to play in a more physical brand of basketball. He's playing for a good coach, who is very demanding. So, he has progressed nicely. Hopefully he can bounce back from injury [he had a sprained knee at the time, but is already playing again] and Siena can make a run at the Italian title."

"I know Marco, it was important when we were going through the process with Erick, trying to find a place where we felt comfortable, that he was going to get good coaching and the coach kind of had a grasp of what we were trying to accomplish, as well. Marco worked for the Suns for a couple of years, an international scout. He's a really bright guy, a really fiery guy, great YouTube clips from Marco. I think it has worked out well."

Connelly on why the Nuggets and Green settled on Europe instead of the NBA D-League:

"Two reasons: money, you make a lot more money overseas. The D-League is a tough job, I think the A-Level contracts are, I'm sure I'm off by a couple grand here, like $28,000. You can make pretty good money overseas, it's difficult being a first year guy, but Erick made much more than $28,000. Also, I think some guys would say the intensity of the D-League games, game-to-game, don't match what you see overseas. It's just hard with the travel and the nature of the D-League, it's so transient with the rosters. I think not every game maybe is a game that the intensity that you hope for, for development. Both models are great, I think the D-League certainly keeps you a step closer to the NBA and you're call-up eligible. And then overseas you're getting a lot more money and some would say it's a more stable, professional day-to-day environment."

Connelly on Green being home sick in Italy:

"My first trip to see him he was kind of home sick, but this time he was driving stick, [driving] down the wrong way [opposite lanes from the USA], parking on the sidewalk, spoke enough Italian to order food, and I think he really enjoyed it. His girlfriend was with him and when you go overseas I think it's important to embrace the culture. I think the guys that get the most out of it both on-and-off the court, they really are excited about, 'Hey, I'm living in Italy. Let me make the most of it.' I was proud of him, this most recent trip. How much he had acclimated to the culture and he went out of his way to try to become part of the community."

Green is expected to be on the Nuggets' Summer League team in Las Vegas in July and I can't wait to see him play again and see how his game has progressed with a little overseas seasoning.