Yesterday, the Nuggets worked out two players in Gary Harris out of Michigan State and Jabari Brown out of Missouri. Let's get to know the shooting guard from Oakland a bit better.

Share All sharing options for: 2014 NBA Draft: Getting to know Jabari Brown, Missouri

Jabari Brown is a 6'4" and 202 pound shooting guard from Oakland, California. He played at Missouri, after transferring from Oregon, and averaged 19.9 points, 4.4 rebounds, and 1.9 assists last season. Brown also shot 41% from downtown last season on 5.6 attempts per game.

Brown is currently slated as Draft Express' 48th pick in their latest mock draft. The Nuggets own two second-round picks (41st and 56th) and could realistically pick him up with one of those selections (most likely the 41st pick). Here is a snippet on Brown's game from DX:

When we looked back at Brown's sophomore season with the Tigers, where he entered as a mid-season transfer from Oregon, he was little more than a spot-up shooter. He took on an expanded offensive role this season, increasing his usage rate from 20.6% to 26%, while simultaneously increasing his true shooting percentage from 58% to 63% which rates fifth among shooting guards in our top 100 prospect rankings.

Brown is still an excellent spot up shooter, making 39.4% of his catch and shoot opportunities. He's got deep range and terrific mechanics, making 41% of his overall 3-point attempts on a large quantity of attempts, which is his biggest selling point as a NBA prospect. Despite his tremendous shooting ability, he also made significant improvement this season in terms of his ability to attack defenses off the dribble by showing much more confidence in putting the ball on the floor when the three point shot is not available. He did a great job of using his strong frame to initiate contact around the basket this season, as his 8.3 free throw attempts per 40 minutes ranked eighth among all prospects in our top-100.

Although he was still primarily a jump-shooter this season (67% of his half-court attempts came on jumpers, down from 84% the year before), he showed an increased willingness to attack the rim, where he converted a solid 59% of his attempts around the basket, according to Synergy Sports Technology. Question marks remain about his ability to continue to do so effectively at the NBA level considering his average physical tools, but Brown can no longer be considered strictly a one-dimensional player, which certainly helps his draft prospects.

Brown on his workout with the Nuggets:

"I showed I can handle the ball and create my own shot," said Brown. "They know I can shoot ... I am a competitor."

Brown on his weaknesses:

Brown on where he sees himself getting drafted:

"Honestly, I don't know," said Brown. "I'm just out here, in every city, competing [against] whoever I'm up against and showing that I feel like I'm a first-round player. This is [predraft workout] number seven. I felt pretty good in all the other ones [workouts in other cities], I feel exhausted out here, I can definitely tell the difference [in altitude]."

Brown on how his game meshes with Denver:

"[Nuggets] get up-and-down, they got Ty Lawson - a ton of speed, and I think I can be a guy kind of like how Randy Foye can stretch the floor and hit threes." 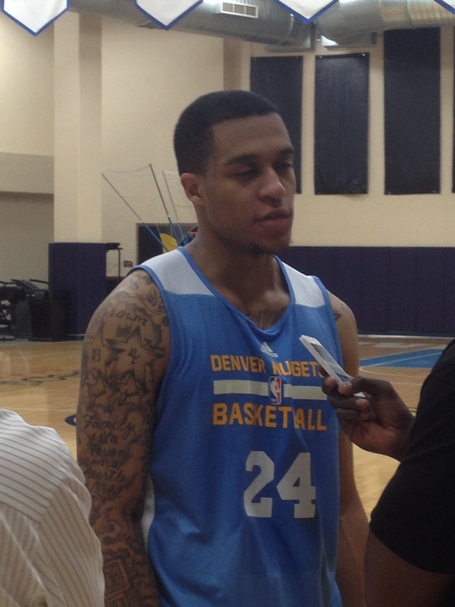 Now let's get to try to know Brown a bit off the floor ...

Nate Timmons: You're an Oakland guy like Brian Shaw and coach Chris Farr, did you get a chance to talk with them yet? (This is before his interview with the team.)

Jabari Brown: Yeah, I talked with Coach Chris before, he's a great workout guy and development, so it was good to see him.

Timmons: Your AAU team was the Drew Gooden Soldiers, did you get a chance to interact with Gooden?

Brown: Yeah, he used to come out to some tournaments and stuff like that, so we got to know him.

Timmons: And he got to play some big minutes for the Wizards in the playoffs ...

Brown: Yeah, he bounced back and he's doing really well, I'm happy for him.

Timmons: What were your first impressions of Denver?

Brown: Well, Melo was my favorite and Allen Iverson when I was younger, so I was a Nuggets fan for a long time and I'm definitely familiar with the team and I like the city, it's nice.

Timmons: What could we find you during on an off-day?

Brown: Chilling, especially right now - trying to get all my rest, watch movies, nothing too major.

Timmons: How about a favorite Denzel movie?

Harris: I like Training Day and He Got Game.

Timmons: How about a favorite exercise of yours that's not maybe basketball related or not in the weight room?

Brown: I like to swim, swimming is cool when you get a chance.

Timmons: Let's say we're on MTV Cribs and we open up your refrigerator, what's inside?

Brown: You're not going to find too much. I don't cook, living by myself, I tend to go out and get food, but a lot of Gatorades and a lot of waters.

Timmons: That's the good stuff, how about a cheat day - what could we find you pigging out on?

Timmons: You're on the verge of the NBA. Let's say you get established, what would you rather have: a shoe deal, your own restaurant, or a reality TV show?

Brown: How much is the shoe deal?

Timmons: I'm guessing it would be a lot.

Timmons: How many pairs of shoes are in your closet?

Timmons: Do you have any hidden talents that people may not know that you like to do or that you do well?

Brown: I wouldn't say I have one of those.

Brown: My immediate family and some friends, back in Oakland most likely.