It's one of my favorite times of the year. Draft season! The Nuggets will be bringing in a few faces and hopefully you'll get to learn a bit more about the prospect away from the court with these interviews.

Gary Harris is a 6'4" and 205 pound shooting guard out of Michigan State. He's just 19 years old and played a couple of seasons under an excellent coach in Tom Izzo. Here is a snippet on how Harris' game breaks down according to Draft Express:

Harris has nice versatility for a shooting guard, starting with his excellent perimeter stroke. He is very effective with both his feet set and off the dribble, making 40% and 41% of his attempts in these situations respectively. He has good mechanics and range, and has the added bonus of being capable of coming off screens, which is another tool that can be utilized by his NBA coach in the half-court. If a defense is aggressively trying to take away his ability to make shots from beyond the arc, Harris knows how to create space for himself to get his jumper off in the mid-range, using his strong frame, and can also attack a closeout semi-effectively in a straight line to the rim.

Harris is also an excellent defender, capable of guarding both backcourt positions. He has outstanding fundamentals on this end of the floor, always getting in a low stance and putting very good effort in, and showing excellent awareness both on and off the ball. A physical player who uses his strong frame well, Harris has very good anticipation skills, which allows him to get in the passing lanes regularly and even come up with an occasional block. He was very well schooled under Tom Izzo, and does a good job in team concepts, which should help him get on the court relatively quickly in the NBA.

Harris has a strong basketball IQ in general, which translates to the offensive end as well. He doesn't turn the ball over very often (2.1 per-40), and is an unselfish passer who executes well in the half-court. He'll generate a couple of assists each game by making a simple extra pass ahead in transition or finding an open shooter or cutter within the flow of the offense.

We got to watch Harris shoot the ball in pick-and-roll situations and we got to see him launch three pointers. The Nuggets coaches had Harris (and Jabari Brown) attempt as many threes as they could from five spots on the floor, the same five spots you'd see during the NBA All-Star game three-point shootout.

As I watched Harris routinely hit three after three, I also noticed just how each shot was the same as the previous one. From the way he released the ball, to how his feet landed on the Pepsi Center practice floor. He ended the workout session with a pretty nice bounce the ball off the floor, catch it, and dunk it play that put a nice cap on the morning display. 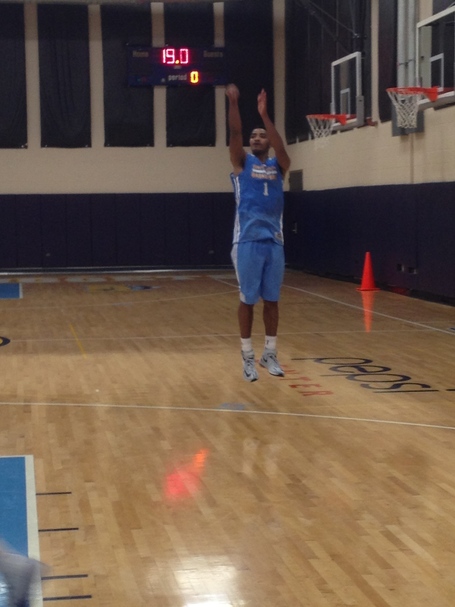 That's Harris the basketball player, now let's try to get to know a bit more about him off the floor ...

Nate Timmons: You got run through some of your workout today by an Indiana guy Jared Jeffries, did you ever watch him growing up?

Gary Harris: I'm from Indiana (Fishers, IN), so I know all about Jared, he was a great player.

Timmons: Your mom is the 7th leading scorer in Purdue's history and played a year for the Detroit Shock, did you guys play some games growing up?

Harris: Everybody asks that question, yeah we did play a little bit when I was growing up.

Timmons: You were a Marketing major at Michigan State? What would you do with that degree if you were not playing basketball?

Harris: Be around it (the game). I love sports, I couldn't think of life without it. So, I would just try to get on the marketing side of sports.

Timmons: What were your first impressions of Denver?

Harris: I heard about the Altitude change and how it's so much harder to workout here. That's why all the Olympians come to train here, but I really didn't know much about it until I got out here and started working out and experiencing it.

Timmons: What could we find you during on an off-day?

Timmons: Yeah or any time.

Harris: Relaxing, especially during this process, get as much rest as possible because you're flying from city-to-city. Any other time, probably the same thing - relaxing and just being low key.

Timmons: Are you a movie guy at all?

Harris: Yeah, I'm getting into movies now that I got a lot more free time.

Harris: I don't have a favorite actor.

Timmons: How about a movie you've seen recently that's good?

Harris: The X-Men movie was good, I don't know how I feel about Godzilla, but I definitely liked the new X-Men movie.

Harris: Anything Hip-Hop, anything that's hot.

Timmons: How about a favorite exercise of yours that's not maybe basketball related or not in the weight room?

Harris: I like to stretch. I didn't realize the importance of stretching until I actually did it. That's something I'm starting to get into now, start trying to do some Yoga to maintain my body.

Timmons: Let's say we're on MTV Cribs and we open up your refrigerator, what's inside?

Timmons: That's the good stuff, how about a cheat day - what could we find you pigging out on?

Timmons: You stay pretty clean with your diet then?

Harris: I try to, but I'm more of a fast-food type of guy - I'll go out to eat, I really don't have anything in the refrigerator.

Timmons: You're on the verge of the NBA. Let's say you get established, what would you rather have: a shoe deal, your own restaurant, or a reality TV show?

Harris: I'm a huge shoe guy, a reality TV show would be pretty cool though.

Timmons: A guy here on the team, JaVale McGee, has his own ... maybe you could talk to him about how that works?

Harris: (While still thinking about the shoe deal as I blurted out the JaVale show) I'll go with the shoe deal.

Timmons: How many pairs of shoes are in your closet?

Timmons: Did you have a favorite player growing up?

Harris: No, I just love watching basketball. I'm at the age now where I don't have any favorite players anyways, I just like watching the game.

Timmons: Do you have any hidden talents that people may not know that you like to do or that you do well?

Harris: Oh man ... that's a good one. I think everybody pretty much knows about me, I'm pretty boring.

Timmons: Karaoke at all?

Harris: Who knows ... I would love to be a part of it in Brooklyn at the Barclays Center, but if not I'll definitely watch it with my family and some friends.