It's time to answer some questions that have been building up in the old inbox.

We don't ask for questions a lot for mailbags, but maybe it's something we should do more of from time-to-time. I had a few questions posed to me recently and some that I get asked a lot, so let's tackle these bad boys and speaking of bad boys ... I still need to see that 30-for-30 on the Detroit Bad Boys.

Big Nuggets fan here in AK (Alaskan4Fat).  Love your work on DS, the podcasts, etc.  Thank you on behalf of all the long distance Nugs fans! I was surprised to hear [Chris] Dempsey suggest [Evan] Fournier might not be in the Nuggets plans on the CSG podcast. What are your thoughts? Maybe I'm missing something but I'm really a big fan of his game and see so much potential. Take care and look forward to more good stuff!
-Harlow

I'm a huge Fournier fan, too. Getting to know him, just a little bit, over the past two years, it's amazing how he has grown. At his rookie press conference he couldn't understand all the questions he was asked and didn't speak much English either. Now he's totally fluent and you can see how much confidence he carries himself with. Let's also not forget that he's just 21 years-old and won't be 22 until October. He's a kid and yet, he has been productive on the highest level.

With all that said, I wasn't surprised to hear Dempsey say Fournier could possibly not be in Denver's long term plans. Let's face it, for the right price - anyone on the roster could be gone. I still recall talking with assistant coach Lester Conner at Summer League and him being open and honest about Evan needed to do better on the court. They wanted to see him improvise more on his drives and continue to build confidence when things were not going his way. I think we saw that this season, he definitely showed some signs of improvement and flashes of big scoring potential. I don't know if Fournier will cement himself as the starter of the future, but there's also nothing wrong with finding a great sixth man. Just look at the Portland Trail Blazers, wouldn't they kill for some big time bench production?

We still have a long way to go with finding out who Fournier will become, but his time in Denver is not guaranteed. If the Nuggets keep the 11th pick, they very well could land a shooting guard at that position in the draft - there are certainly some prospects available there. And if Denver makes a trade for a veteran shooting guard, that could also mean some different things for Evan.

We still have a long, long way to go to figure out who Fournier is, but we don't know how much time Denver is willing to wait to find out.

@Nate_Timmons Hey Nate! With increase in salary cap can Nuggets resign Aaron Brooks? Could they go after Lance Stephenson? Thx

The tax guru himself, Larry Coon, recently penned a piece on the projected cap numbers that won't be official until July, but here's an early projection:

So, what does the above mean for the Nuggets? Well, nothing too exciting unfortunately. Sham Sports has the Nuggets projected salary for the 2014-15 season at $65.52 million. With the team over the cap, but over by just $2.32 million, it means they should qualify for the "Non-Taxpayer Mid-Level Exception" that is available to teams that are not paying the luxury tax, or less than $4 million above the tax line. The determination is made after the exception is used, so Denver should be okay and will have $5.305 million to offer (first year salary, can be split between players) - similar to how they inked J.J. Hickson this past off-season.

That kind of money could bring in a key player, but not a guy like Lance Stephenson. I see the Pacers guard getting some offers above that, even with the crazy ending to Indiana's season. Aaron Brooks is definitely a guy that could return, especially with Nate Robinson's ACL recovery. But the flip side there, the Nuggets won't have a ton of roster spots open.

The Nuggets have 12 guys with guaranteed deals heading into the off-season and Quincy Miller's deal must be decided on as he has a non-guaranteed contract for $915K. That means Denver will have 2-3 open roster spots with a first-round pick in this draft, two second-round picks (their own and the Blazers), Erick Green's rights, Joffrey Lauvergne's rights, and Brian Shaw wanting a veteran presence in the mix. That's six potential players, plus Jan Vesely (whom Shaw raved about) and Brooks - making that eight potential players for 2-3 roster spots.

For now, we have a lot more questions than answers.

@DenverSport @Nate_Timmons Think Marcus Smart will be available with that pick?

We were talking draft prospects one day on Twitter and the name Marcus Smart came up. Smart is an interesting combo-guard prospect that has a ton of talent, but also has yet to play to his potential. Take some of this into account with Smart, from our friends at Draft Express:

Any discussion about Smart's prospects in the NBA have to start with his tremendous physical profile, ... Standing 6-4, with a 6-8 wingspan and a ripped 225 pound frame, Smart is bigger and stronger than most NBA point guards, and he's not afraid to use that to his advantage.

Smart makes a living inside the paint, as he relishes contact and gets to the free throw line nearly ten times per-40 minutes, while finishing 57% of his shots around the basket in the half-court. The role he will play in the NBA appears to be well defined, as he's very good in transition and on the pick and roll, and is more than capable of creating shots for himself and others, something he appears to have improved on in his sophomore year. Smart's assist to turnover and pure point ratio both increased notably this past season, particularly his ability to avoid coughing the ball up, as his turnover percentage decreased from an alarming 19% as a freshman to a much more manageable 14%.

Another area Smart is likely to excel in very early in the NBA is on the defensive end. With his size, strength and length, Smart is capable of guarding multiple positions, which gives his coach nice versatility to take advantage of in different schemes. He even proved strong enough to put a body on big men in certain stretches, showing the type of toughness and competitiveness NBA executives love. On top of that, he brings terrific anticipation skills for blocks, steals and rebounds, hauling in seven boards per-40 minutes and over three steals thanks to the intensity level and timing he displays.

On the downside, Smart still sports a very inconsistent jump-shot, something that didn't really improve from his freshman to sophomore seasons. His shooting mechanics leave a lot to be desired, as he dips the ball violently, and fades forward and sometimes sideways on his release. That wouldn't be that big of an issue if Smart didn't take as many jumpers as he does-nearly half of his field goal attempts came from beyond the arc, and he hit just 30% of them, many being contested ones early in the shot clock.

Smart is not a non-shooter by any stretch, but his poor decision making hampers his percentages significantly. He will have some very ugly low-efficiency nights in the NBA against better-organized defenses until he learns how to reel himself in and plays within his limitations.

Without taking team need into account, Draft Express has Smart rated at the no. 6 prospect in the draft. Does that mean he'll be taken 6th? Not so fast. Teams, like the Lakers at 6th (for now), definitely need point guards, but we have a long way to go in figuring out who may be there at 11th for Denver or if Denver will move up in the draft into the top-3.

May 20th can't come soon enough ... and remember, the Nuggets can only move up into the top-3 or they stay at 11th. Denver could slide down if a team behind them hits a top-3 pick. So it's top-3, 11th or potentially 12th, those are the options.

On Smart, I'm not terribly enamored with him. Russell Westbrook couldn't shoot much when he came into the league and his competitive nature helped him practice to solve that. I think I'd like to see Denver go in a different direction if there was a choice between Smart and some others, but we'll see how things may change as the draft approaches.

On the [Colorado Sports Guys] podcast, The King of Thornton suggested the Nuggets trade for Tyson Chandler. What do you think the Knicks would want to get that deal done since he'll be an expiring contract? The more I thought about it, that's the guy Denver needs to target, he's a leader.

Clint, the name is Nate or Nathan - my mom would be terribly offended if she thought people were calling me Nathaniel ... although I do get that from time-to-time and don't mind it. Big props for getting Jeff Morton's name right though!

Tyson Chandler, I'm on board, too. Shaw wants a veteran leader and Chandler sounds disgruntled in New York. Ty Lawson's improved pick-and-roll game would work very well with Tyson and the combo of Chandler and Timofey Mozgov anchoring the center position would be a defensive delight. Chandler is also still very productive. Check out his shot chart from this past season: 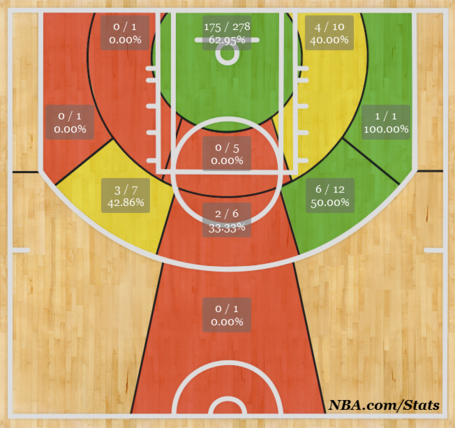 Those numbers inside the paint are to die for. Consider that Mozgov shot 55.7% in the paint and you see just how automatic Tyson is on the inside finishing around the rim. He'd work well in Denver. At just 31 years-old, Chandler still has some good years left and the $14.5 million expiring contract is low-risk ... especially if you could get the Knicks to take certain contracts off the roster.

I would not sign off on trading Kenneth Faried for Tyson, but if you could build a deal around JaVale McGee, that might be too good to be true. It's hard to project what Phil Jackson will want to do in New York, but we know he values big men. It'd be hard to see the Knicks moving their only real defensive big man, but if they did and Denver could get involved, I'd be all for it.

SAVE THE DATE FOR TUESDAY, MAY 20THDENVER STIFFS NBA DRAFT LOTTERY HAPPY HOUR

2-for-1 on all wine, well and draft beer as we watch the Nuggets get TWO chances at a top-three lottery selection.