In this post we focus on the two newest additions to the Nuggets in the game against the Bulls, and look at some positives of their play in their first game through video and the words of Brian Shaw.

Share All sharing options for: The newest Nuggets hit the court quickly

Since the trades occurred bringing Aaron Brooks and Jan Vesely to the Nuggets there have already been some great discussion here (Aaron Brooks) and here (Jan Vesely) on Denver Stiffs, and also on SB Nation sites the Dream Shake (Rockets) and Bullets Forever (Wizards).

Both players have also already hit the court for Denver only a day after the trades occurred, as the newest Nuggets suited up in powder blue to play the Bulls in Chicago on February 21st. While there has been lots of talk about Brian Shaw's negative comments after the Nuggets Bulls game, he also discussed the positive play of the two new Denver players which I have taken and matched to game footage to highlight some of the skills of the newest Nuggets.

"I thought Aaron was good, he was aggressive. Offensively as a point guard you have the ball in your hand and you can shoot the ball. He’s been in the league for a while now so he understands how to play. Being thrown into the situation that he was thrown into, I though he did a good job."

After only one game Aaron Boroks has already showed some of his ability to score the basketball. Brooks scored his first points 12 seconds after subbing on and had an efficient 7-11 shooting night and was able to both hit jumpers and get to the rim, as shown in his shot chart below. 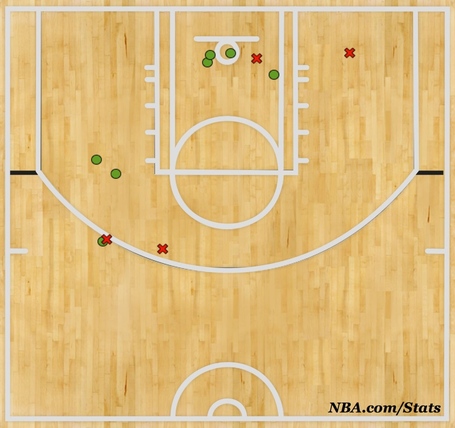 Note: Clips of all of Aaron's shots can be seen for free using the Video box score for the game at NBA.com/stats.

Aaron sticking up for his new teammate

"Then one of the other things that I like to see, Aaron was very vocal when he was out there on the court telling guys where to go and when Kenneth got the flagrant foul, he’s the smallest guy on the team, the newest guy on the team, and he was the one that got in there and was pushing, so I was happy to see that on his part."

The video clip below shows a replay of the Flagrant foul by Kenneth Faried. After the foul Joakim Noah comes in and started some pushing and you can see Aaron immediately step right into the middle and start talking back to Noah. Both players ended up receiving a technical foul, but as the quote above shows, they are the 'good' kind of technical to a coach as they come from sticking up for your teammates.

"We started switching in the second half just to try to be more aggressive, and he was caught on their power forwards and centers a lot of times, and he was fighting and boxing them out so that's definitely that one of the things that I hope does become contagious and he can provide for this team."

1. The first play is a good example of Brooks working hard and boxing out a bigger player. Chicago run a slip screen and Brooks and Vesely switch which leaves Brooks guarding power forward Taj Gibson in the post. Brooks does an excellent job fighting to box out the larger Gibson and this allows Quincy Miller to rebound the missed shot from Mike Dunleavy.

2. In this play sequence DJ Augustin and Taj Gibson again run a slip screen and Denver switches. The Bulls then try to exploit the mismatch in the post by going to Gibson but Brooks is able to defend well and knocks the ball away from Gibson. The ball goes out as Aaron tries to recover it and the Bulls call a timeout.

After the timeout Vesely shows some active hands on the inbounds passes. On the first attempt by Kirk Hinrich he denies the ball to Gibson but it is knocked out again before Denver can recover it. The Bulls reset and again try to inbound to Gibson (this time with Tony Snell as the passer), but Vesely keeps his cover on Gibson and his eye on the ball and he intercepts the inbounds pass and passes it on to Brooks to complete a great sequence of hustling defense by the new guys.

As can be seen in the second play sequence in the video above Jan was an active defender in his first game for the Nuggets and Brian Shaw took note of Jan's activity despite the short turnaround to join the team and play:

"He showed that is he’s very active, he's gonna get a chance to get out there and play, its a tough situation for him to be throw into getting here late last night not getting a chance to practice with the team or go over any plays or anything like that."

Some of that hustle can be seen on the stat sheet with Jan recording 5 rebounds, 2 steals, 1 block and 1 assist in his 15:49 on the floor, but Shaw also mentioned how some of the other activity of Vesely may not be so easily picked up:

"Jan’s feeling his way through as well and he not an offensive player, things that he brings to the table are more intangible things so those kind of things won’t go as noticed by the typical fan but I liked his activity and things of that nature."

1. The first play is a short clip showing Vesely tipping a pass (which doesn't show on the box score). In some cases tips can lead directly to turovers, and they also often have a disruptive effect upsetting the offenses rhythm even if there is no turnover. This has been an aspect missing from the Nuggets defense this season and it is a welcome sight to see this activity from Vesely.

2. The second play shows Jan working very hard fronting in the post to deny Jarvis Varnado the ball. Despite trying on both sides of the post Vesely successfully stops the pass from being thrown and the Bulls are forced into a different play which ends in a contested miss by Nazr Mohammed.

3. The final play shows Jan fronting the post again, this time against Taj Gibson. Gibson cuts towards the hoop and Noah throws the pass but Jan uses his length to tip the ball which he recovers to complete the steal.

While Aaron Brooks and Jan Vesely are both on expiring contracts and may not be on the Nuggets past the end of this season, both players showed enough positives to indicate they will try to make the most of their extended trials and prove they have a future on the Nuggets roster going forward. With the injury situation in Denver they may get a good amount of court time to do it, too. Good luck to both of them.