Building bridges with basketball (and more) ...

Thanks to the Denver Nuggets and Denver Sister Cities International, the Mile High City has re-engaged with our sister city of Nairobi in more ways than one.

Share All sharing options for: Building bridges with basketball (and more) ...

What happens when four Kenyans attend their first ever NBA game?

While I don't have a great punchline for that one, in the case of the Denver Nuggets they witnessed a thrilling - yet heartbreaking - 112-107 overtime loss to the Phoenix Suns. And despite their boisterous cheers throughout the entire game, our friends from Kenya just couldn't get the Nuggets over the top.

This past Tuesday night I had the privilege of co-hosting four members of a delegation from Nairobi, Kenya (one of Denver's 10 sister cities), including the Honorable Speaker Alex ole Magelo and Majority Leader Elias Otieno, for their first ever NBA game - bringing nearly full circle a city-to-city relationship that was re-booted just a few years ago by Denver District 8 City Councilman (and HUGE Nuggets fan) Albus Brooks. I say "nearly" full circle because the circle was completed on Wednesday afternoon when Denver Mayor (and another HUGE Nuggets fan) Michael Hancock took part in a ceremony at the Denver Museum of Nature & Science to repatriate 30 vigango artifacts that had been stolen from Kenya many years ago, and by happenstance ended up at the Denver museum in the early 1990s. 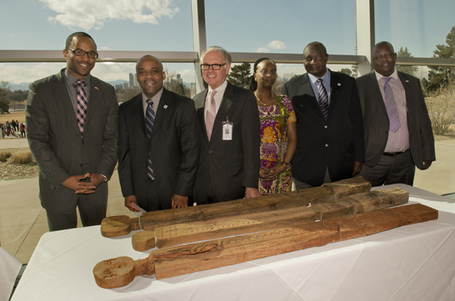 The repatriation of the artifacts has gotten national and international attention, and the story was featured earlier this year in The New York Times. Both the City of Denver and the Denver Museum of Nature & Science deserve major kudos for returning the artifacts to their rightful owners, especially considering that the museum was under no legal obligation to do so. But as museum President and CEO George Sparks said in Wednesday's ceremony: "It is the right thing to do."

How yours truly ended up partaking in all this comes almost by accident and wouldn't be possible without the graciousness of the Mayor's office, Councilman Brooks' office, our friends at Denver Sister Cities International and, last but by no means least, your Denver Nuggets. And while it's easy to get caught up in trade deadline rumors and the Nuggets current struggles on the court, it's important to keep in mind just how charitable and impactful our local basketball team can be.

Several weeks ago, I was most fortunate to participate in a Denver Sister Cities International delegation to Nairobi, a city I had visited once before and had been dying to return to ever since. Not much larger than Denver, Nairobi is a vibrant place that represents the frontline of the new African economy: bursting with a thriving and growing middle class armed with today's technologies and tomorrow's entrepreneurs, yet still replete with the challenges that face many of sub-Saharan Africa's largest urban centers such as extreme poverty, joblessness and terrorism.

On that trip, I joined Councilman Brooks and others from the Sister Cities delegation for a jam-packed five-day trip. In just five days, we got to meet the Nairobi Governor Dr. Evans Kidero to discuss future business and diplomatic exchanges, were hosted at the Honorable Speaker Magelo's home for a fabulous Kenyan dinner and Maasai tribal dancing, visited the Madaraka Primary School (where thanks to funding from the Bill & Melinda Gates Foundation, $45,000 was donated to revamp the school's water and bathroom infrastructure), met with the head of Nairobi Water (a representative from Denver Water joined our delegation and has been working with Nairobi Water on improving their systems), conducted a university-to-university education exchange, visited the Mathare slum (one of the worst in all of East Africa), toured the city's business centers, visited a thriving orphanage on the outskirts of Nairobi, visited the David Sheldrick Wildlife Trust (my personal favorite charity in the world), met with the US Ambassador to Kenya, and even snuck in the AFC Championship Game to watch the Broncos best the Patriots at two o'clock in the morning at the hotel bar. 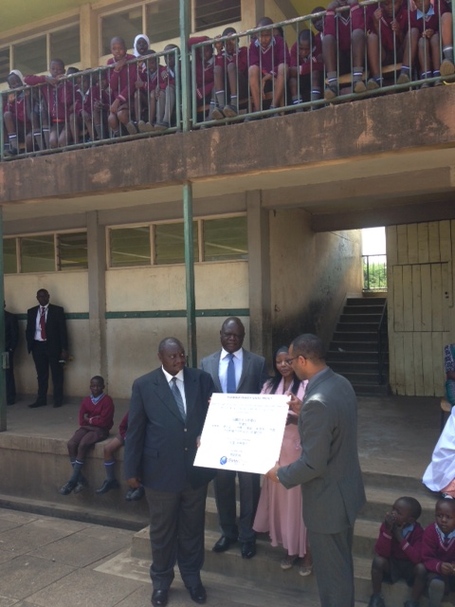 Councilman Brooks presents a certificate to Hon. Speaker Magelo from the Bill & Melinda Gates Foundation acknowledging a $45,000 donation that went to overhauling the school's bathrooms and water infrastructure. Today the children of Madaraka School have running water seven days a week.

During the trip the prospect of a February visit to Denver by the Kenyan Delegation was discussed, so I immediately looked at the Nuggets' schedule. When I found out that these honored guests had never attended an NBA game and that the Nuggets would be playing one home game during the visit, I reached out to the "Two Tims" - Connelly (General manager and Executive Vice President of Basketball Relations) and Gelt (Director of Media Relations) - to see what could be done. Thanks to the generosity of Tim and Tim, arrangements were made to get the Kenyan Delegation to the game and (despite the tough overtime loss), our Kenyan friends had the time of their life. And the NBA and the Denver Nuggets officially have four new die-hard fans.

Wins or losses on the court aside, basketball can be used as the ultimate tool for diplomacy to connect with others throughout the the world. Longtime Denver Stiffs readers might remember my 2011 travels to Madagascar and South Africa alongside former Nuggets GM Masai Ujiri - a trip that enabled me to meet both top NBA brass and some world leaders - and last year my colleague Nate Timmons wrote extensively about Denver's own Brian Smith's The Hoop Dream, a non-profit whose mission is build basketball courts in East Africa, including Kenya and Uganda.

Even though Nairobi and Denver are nearly 9,000 miles and about 21 hours of flying apart from each other, thanks to the events that have taken place these past few weeks the distance between us seems as short as ever. In just a matter of years, I envision business and basketball exchanges taking place between our two great cities as the relationship re-booted by Councilman Brooks and moved forward by Mayor Hancock and Denver Sister Cities International continues to bear fruit.

In concluding his remarks during Wednesday's repatriation ceremony, the Honorable Speaker Magelo summed up our sister city relationship better than any of us could by stating: "Our relationship is a Mile High." 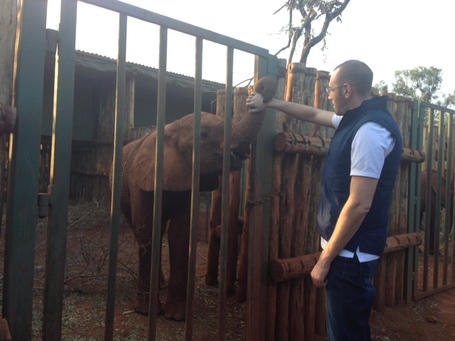 Making a new friend at The David Sheldrick Wildlife Trust, my favorite charity in the world. The Sheldrick Trust rescues baby elephants whose mothers have been killed by poachers, rehabilitates them and returns them to the wild. 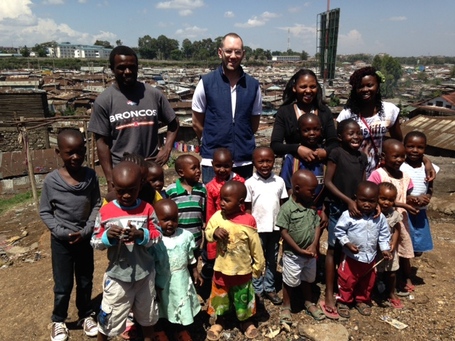 Visiting Pastor Moses Okonji at the Mathare slum, one of the largest in East Africa. Pastor Moses works with the children of Mathare to build bridges to a better life outside of the slum ... and he's a huge Broncos fan!