The NBA All Star weekend took place in New Orleans, LA without any Denver Nuggets players. But a funny thing happened on my way back to Denver from The Big Easy: I had a chance encounter with one of the two members of the Nuggets organization (DJ Bedz being one member) that was a participant in the All Star weekend.

Share All sharing options for: Nuggets were well represented in New Orleans by dance team member

You never know who you might run into on an airplane. On the 8:00 a.m. flight back to Denver from New Orleans on Monday Feb. 17th, I had the good fortune of sitting across the aisle from Kaila, a member of the Nuggets' Dance Team. She spent the weekend, with other select members from the NBA's dance teams, performing at the NBA Celebrity game Friday night, for the various contests on Saturday, and Sunday for the game itself. I got a chance to catch up with her after the Suns vs. Nuggets game to reflect back on the whirlwind weekend.

Each NBA team submitted three members from their dance teams to be able to participate in the weekend's festivities. It was up to a group of folks at the NBA to review video and select the women who would head to New Orleans - one member from each available team.

"I didn't even know I was selected [as one of the three from Denver]," said Kaila. "It was a huge surprise and I was really excited." 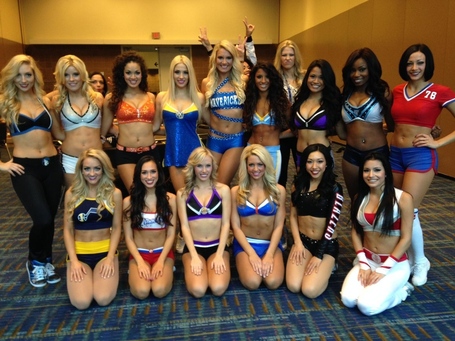 The All Star Dance Team in New Orleans.

This wasn't going to be a relaxing trip to Louisiana. There were three days chock-full of events and Kaila was going to be working with new dancers and coordinators on complex routines.

"They kept us really busy, 16 to 18 hour days that we were either rehearsing, performing, or training," said Kaila. "It was cool seeing all the celebrities court-side, I've never been that close to a bunch of them so it was really cool."

Not only did she get to see the celebrities court-side, but she even got to dance with Vanilla Ice at a surprise performance that wasn't televised during the dunk contest and with Pharrell Williams during the All Star game. So, what was her favorite part about getting to go to NOLA?

"The performance aspect of it. That's always what I look forward to, whether it be with the Nuggets or at the All Star game," said Kaila. "Being chosen to represent my team and my organization, that was the biggest honor. I just wanted to make sure that I made them proud and represented well. And the Pharrell performance was probably one of the coolest things I've ever done." 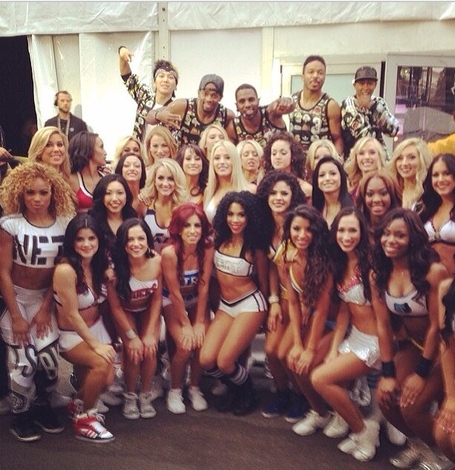 The All Star Dance Team with singer Jason Derulo and more.

Kaila has been with the Nuggets for three seasons now. She's originally from Spokane, Washington, but jumped at the chance to move to Denver to dance for the Nuggets franchise.

"I knew during college, my senior year, I wanted to keep dancing. So, I started researching teams and what appealed to me most about Denver, the dance team, was the fact that they did a variety of dancing," said Kaila. "And that was something that I was interested in - being pushed as a dancer. That's what really attracted me to come here and Colorado is a lot like Washington." 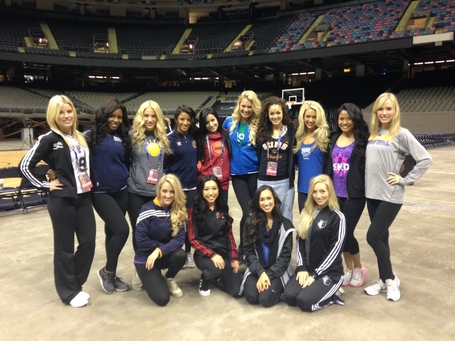 The All Star Dance Team in the Smoothie King Center where the Pelicans play.

What you might not know about the Nuggets dancers is that they are as dedicated to their craft as the players themselves. They start preparing for the season in June and have a 10 month commitment with their team that could last a bit longer with the playoffs, too.

"We practice three days a week for three and a half hours, usually more than that, and we train outside of that, too." Kaila said. "I think some people think that we are just dancers and we end up going out there and doing the same things, but we train a lot like athletes do. We consider ourselves athletes, just like the guys do, we train really hard."

And dancing for an NBA team is not all that Kaila does. She's also a nanny and graduated from Washington State University with a degree in fashion merchandising. But dance is one of Kaila's passions that the former gymnast didn't get really serious about until college.

"When I was taking a year off in-between UNLV and Washington State, back home in Spokane we had a team called the Spokane Shock - an arena football team, one of the girls I was working with at the time told me I should try out for [their dance team]," said Kaila. "I'd never really danced before on a team, so I just went and tried and I was definitely out of my comfort zone, but I learned. Then they encouraged me to try out for the Washington State dance team and it just kind of went from there."

Yes it did, it took her to New Orleans and who knows where else it may take her, but like any athlete she knows there may be a time where she has to hang 'em up. So what might be next for the All Star dancer?

"I'm going to be 27 [years old] this year, so it's kind of hard to say," said Kaila. "I graduated from college for a reason, but it's hard to give it up. If I could do it forever, I would. It's so hard to say, this is my ninth year being involved in something outside of high school, for a college team or a professional team. This is my passion, so I don't ever want to give it up."

That could be just the news the New Orleans Pelicans' Senior (citizen) dance team needs to hear, as they too got to preform during the All Star game. They might have another recruit in the far-off future in the current Nuggets Dance team pride. For now though, Kaila is happy about the opportunities afforded her with the Nuggets and in their team's efforts at games and in community service opportunities.

"We get to share our talents and be a positive influence in the Denver community," said Kaila. "That's one of my favorite parts." 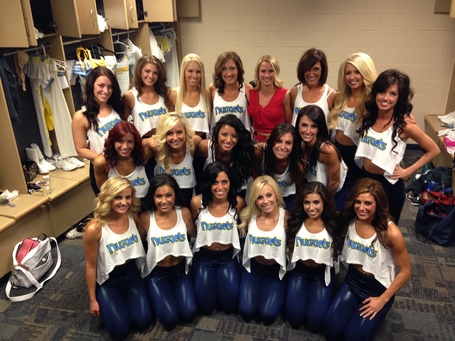 Be sure to check out Kaila's biography page on the Nuggets' website, included is a day in the life video: click here.