Darrell Arthur set to return for Nuggets against Bobcats

The Denver Nuggets, riding a two game win streak, take on the Charlotte Bobcats tonight and will have a familiar face back in the lineup.

Share All sharing options for: Darrell Arthur set to return for Nuggets against Bobcats

Nuggets power forward Darrell Arthur has missed the past seven games with a hip strain, but will return to the lineup tonight against the Charlotte Bobcats.

"They kicked me out of practice yesterday," said Arthur. "I wanted to go a little bit longer, but they were just taking precautions."

Arthur's presence on the court will be a blessing for the Nuggets on both sides of the ball. Arthur has, by far, the best defensive rating of the four main rotational guys, but he also plays just over 18 minutes a night. His pick-and-pop game has also been a piece missing from the Nuggets' offense. First, take a look at the offensive and defensive ratings of the four main rotational bigs for Brian Shaw's team:

When Arthur is on the floor, the pick-and-pop game comes to life. Hickson has the ability to space the floor, but it has been Arthur doing the best work outside of the paint for the Nuggets. 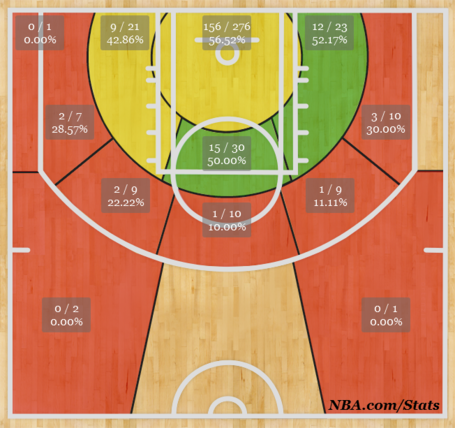 As you can see, Hickson has been below average outside of the paint this season on shots marked in the "red" above. He's just 9-45 (20%) in the "red" zones between the paint and the three-point line. So, with Arthur out the team has been unable to get a respectable pick-and-pop game going. 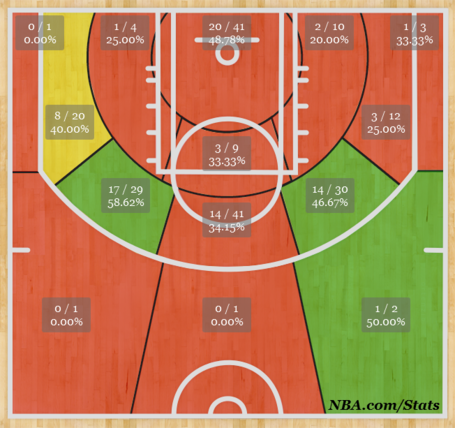 Arthur is shooting 56-132 (42.4%) outside of the paint in the five zones located just inside the three-point line (the pop area). As you can see, the bulk of Arthur's workload comes on long jumpers and he has been really good just outside the elbows near the free throw lines where he is shooting 31-59 (52.5%) on the season and where he is an above-average shooter (marked in the "green" areas).

It will be nice to have Darrell back on the floor tonight and we'll see just how much he's able to play. Welcome back Mr. Arthur.