There's something to be said for the inexorable advance of technology.

Back on October 1st, 1999, when the Pepsi Center opened its doors for the first time, the arena was a marvel of modern design. Its JumboTron, for the era, was state of the art. It was certainly an upgrade for the fans who previously attended the Brutalism-inspired McNichols Arena to watch their Nuggets play.

While the Pepsi Center's sight lines and seating are generally fantastic throughout, the JumboTron is beginning to show its age. It can be hard to read, replays are often grainy and it simply is an outdated display. Given the great views from almost any seat in the house, though, I don't often find myself paying much attention to the JumboTron at the Can, anyway.

Beginning last year, the Pepsi Center began renovations which included hundreds of new flatscreens throughout the club level and four additional scoreboards higher up. The next improvement will be a completely new video scoreboard that rivals the magnitude of the display in "JerryWorld" (aka AT&T Stadium, home to the Dallas Cowboys). Don't believe me? Compare for yourself: 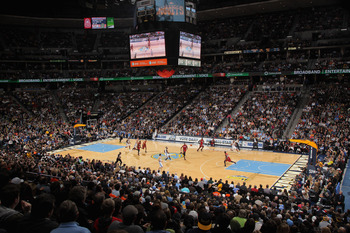 Pretty small, a little difficult to make out, but readable for most. 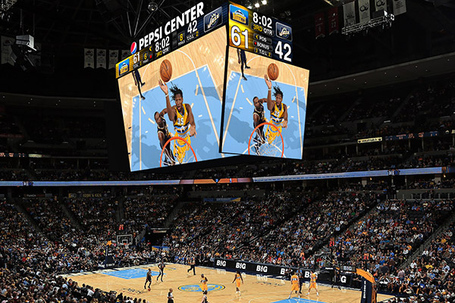 Quite a difference 14 years can make in display technology. 14 years from now, we'll likely be scoffing over this, remarking how limited a non-3D display that can't track individual player performances and broadcast them to our NBA fantasy league apps on our wearable Google Glass through in-house Pepsi Center wireless will be.

For now, though, I'm going to enjoy that monstrosity of a display, and just hope that it doesn't end up pulverizing anyone beneath it.

Oh boy. As if the MeloDrama and Dwightmare weren't enough, the centrifugal news cycle is already starting to spin up over the impending free agency of players like Carmelo Anthony, Luol Deng, Kobe Bryant, Dwyane Wade, Chris Bosh ....and LeBron James.

Michael Beasley to be resigned by Heat

The former #2 overall pick in 2008 is returning to the team which drafted him. After flaming out in both Minnesota and Phoenix, "Super Cool Beas" will look to get his act together in South Beach. Can Beas work with Spoelstra and lay off the tree long enough to remember that he's getting paid millions to put a round ball in a hoop? Time will tell.

J.R. Smith recently claimed that the Knicks (yes, those Knicks) would be NBA champions in the summer of 2014. Terry, not a stranger to ridiculous championship aspirations - remember that Celtics tattoo featuring the Larry O'Brien trophy? - laughed it off. J.R., for his part, is helping the Knicks towards that guarantee by getting himself suspended for the first five games of the season for a third violation of the league's substance abuse policy.