Nuggets need to stay focused through remainder of offseason

With the NBA draft concluded, summer league over and free agency settled, the Nuggets would do well to keep their collective heads down and their noses to the grindstone leading up to training camp.

Share All sharing options for: Nuggets need to stay focused through remainder of offseason

Lawson's recent legal issues couldn't have come at a worse time. With the city abuzz over the suspension of star linebacker Von Miller for allegedly violating the league's substance abuse policies, the spotlight on Denver athletes misbehaving quickly shifted to the Nuggets' star point guard.

While it's (nearly) certain that Ty's second arrest this year won't result in any missed playing time during the regular season, it sets a troubling example for a team that still needs to gel. It seems like we've been waiting for the Nuggets to coalesce into that wobbly whole for years now. Legal issues like these distract from the team's focus and Ty's focus in the offseason. For years, we've been waiting for Ty to be the leader his teammates can look to for guidance. Seeing him in a mugshot certainly won't do anything to help inculcate that perspective amongst the new additions to the squad.

Ty Lawson's arrest - what to make of it

The consistently-excellent Ben Hochman breaks down Ty Lawson's recent arrest and its potential implications. Allegedly, Ty was involved in an altercation with his pregnant girlfriend and former "Bad Girls Club L.A." "star" Ashley Pettiford (neé Ashley Nicole King). An article by Black Sports Online writer Tasha Nicole (warning: some potentially NWS photographs) on May 29th of this year notes that Ty had been involved with another Bad Girls Club star at one point - one Natalie Nunn, in 2010 - and penned a closing warning regarding Ms. Pettiford that now seems prescient:

Cute girl, but seems like she will turn on you if things aren't going well, so you have been warned Ty.

Apparently, she was also involved with Dwight Howard in the recent past:

Ugly. Ty's certainly not without blame in this situation after allegedly triggering the fight when he was overheard by Ms. Pettiford on the phone with another woman. Let's hope that Ty can work things out with Ms. Pettiford, keep his name out of the papers until the start of the season, and open 2013 on a roll.

LeBron James appears to have finally shaved his head

Another member joins the Brotherhood of Bald. Charles Barkley would be (is?) proud. For all the crap that LeBron has taken about his ridiculous attempts to cover his ever-receding hairline with sweatbands, he's still managed to retain a sense of humor about it. However, whenever I look at this image: 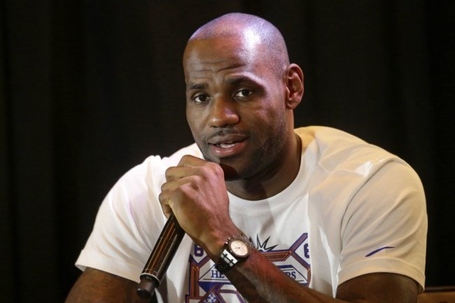 I can't help but feel like I'm looking at Mark McGwire circa 1998. That forehead is massive. Food for thought, given the recent revelations regarding PEDs amongst MLB players...

A funny little outtake from Nate Robinson's Instagram showing him dribbling a basketball through an airport. Worth a watch, especially as the only person to offer him any resistance is an older lady with some quick hands. I hope Nate makes the rest of the NBA look like these disinterested airport-goers this season.