In signing mighty mite Nate Robinson to a very reasonable deal this offseason, the Nuggets pulled off one of the best free agent coups of 2013. What can Nuggets fans expect to see out of Nate in the 2013-2014 season?

Share All sharing options for: Nate Robinson to bring dynamic offense to Nuggets

Although names like Dwight Howard, Josh Smith, Monta Ellis and Tony Allen headlined free agency this offseason, the Nuggets signing of Nate Robinson to a very reasonable deal is one of the most underrated acquisitions in the Association.

Despite assertions made by some that Nate's sixth team in nine seasons suggests a character flaw, it's hard to knock Nate for being too passionate.  I look at Nate on the Nuggets as a talented player finally finding the perfect situation for his abilities.  It's true that the look of the Nuggets offense under Brian Shaw still remains to be seen, yet pairing Nate's relentless attack with Ty Lawson's supersonic speed is going to present a big challenge to the backcourt of many teams.  While the Nuggets had/have the option to slow the game down when they insert Andre Miller to relieve Lawson, the Nuggets last season didn't really have a way keeping that speed up while Lawson sat.  Now they do.

In addition to now having the option of keeping pressure on defenses to keep running at the Pepsi Center, Nate will provide much needed floor spacing.  Consider the shooting "heat maps" for Nate Robinson and Andre Miller from last season (images and stats courtesy of basketball-reference.com): 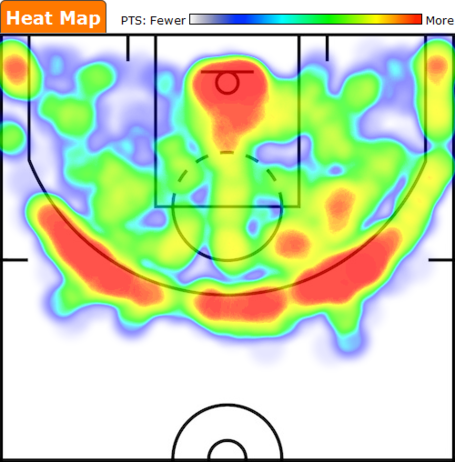 Nate shot 43% overall from the floor , almost 40% from 3, and 80% from the free throw line.  On balance, Nate took 289 more shots than Andre last season, while playing less minutes overall.  He also shot a better percentage than Andre Miller from 3 of the 5 areas on the floor.  Now for a look at Andre Miller's heat map: 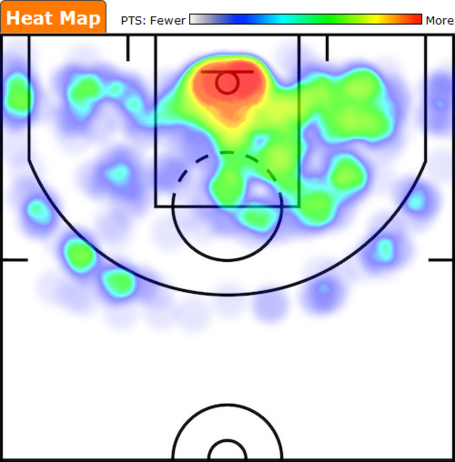 Andre shot 48% from the floor, 27% from 3 (on 64 attempts, yeesh) and 84% from the free throw line.  The only areas of the court where Andre was marginally better than Nate at shooting the ball was at the rim (+0.013) and between 16 feet and the 3 point line (+0.051).  While Andre's low scoring from outside the painted area and at the rim are certainly a product of Karl's "no long 2s" offense, his jumper has been up and down over the last few years and he's never shot above 30% from the three point line for his career.  His inside and post game is certainly as good as ever.

The point here is not to bag on Andre Miller, but  to emphasize that Nate's capable of scoring from anywhere on the floor in a way that the 37 year old Miller may no longer be able to.  That's not to say that Nate should continue to take shots from anywhere on the floor - notably, not between 16 feet and the 3 point line - but that he can take and make those shots.  While there are more efficient players in the league, having a player in a backup capacity who is capable of hitting 60% of his shots at the rim and almost 40% everywhere else - including from deep - will absolutely help the Nuggets space the floor.

Floor spacing in specific was one of the major ways the Nuggets were exploited during the playoff series against the Warriors.  The Warriors forced the Nuggets to take and brick shot after shot outside the painted area because they knew that the guards playing major minutes (Corey Brewer and Andre Miller) simply weren't capable of hitting them consistently.  They were right.

Now that the Nuggets have added 4 players across multiple positions that are all capable of consistently hitting outside the painted area and re-signed Timofey Mozgov (who has a pretty little jumper of his own), they have significantly strengthened a major area of weakness on the offensive end.  Teams that lock down the paint to prevent Faried, J.J. Hickson and JaVale McGee from getting on the glass are going to find themselves buried under shots from Nate, Foye, Lawson and Fournier.  If the opposing team starts to loosen up and begins closing out harder, all members of the Nuggets backcourt are capable distributors and can dish the ball inside very well.  This is without even factoring in the shooting ability of Wilson Chandler and Danilo Gallinari upon his return.

Of course, this all goes without saying that the Nuggets are still going to need to find a way to defend other teams.  That was going to be a significant issue for this team as soon as they found out that a certain turnover prone guard who was terrible at free throws decided to meekly follow after the Nuggets' most recent playoff nemesis.  The Nuggets need to look at that situation as an in-air-jump-pass-turnover under the bridge (so to speak) and see what they can do better on the defensive end - collectively.

In the past, George Karl's defensive "scheme" relied largely on the players continually switching, gambling in passing lanes and using their athleticism to contest and force other teams into taking long jumpers.  Occasional trapping during the playoffs and regular season aside, there really wasn't much more to it than that.  For all Karl's talk of winning with "teamness", the fact that he relied so heavily on individual player decisions on both ends of the floor is curious.  It's hoped that Brian Shaw will employ a much more team-oriented defense featuring less switching and better handling of pick and rolls.

Going forward, Shaw will still need to figure out a way to help the size-challenged Robinson and Lawson disrupt shooters before they can get an open look, the rotationally-challenged Kenneth Faried and J.J. Hickson on how to defend the pick and roll, and the fundamentals-challenged JaVale McGee on boxing out and defending the glass at all times.  The best part of those issues is that they can be fixed with a better defensive scheme and philosophy.

Nate's history with Gallinari, Mozgov and Chandler in New York should help him have a soft landing getting adjusted to his new teammates.  His impact on the rest of the team, though, will be immediate.  Nate's heart and drive to win is one of the strongest in the NBA, and will help lift this team when they need it most.  I'm excited to see how he will contribute to the Nuggets this season.

Check out a few highlight mixes featuring Nate Robinson from his time with the Bulls last season: