The Denver Nuggets have made a curious signing.

The Denver Nuggets have come to terms with forward/center J.J. Hickson, formerly of the Portland Trail Blazers, according to Adrian Wojnarowski. Hickson is a 6'9" and 240 pound rebounding machine and is just 24 years-old.

Denver will give Hickson, a 6-foot-9 forward-center, the annual full mid-level exception of approximately $5 million, plus the 4.5 percent annual bonuses allowed per the Collective Bargaining Agreement, sources said.

Denver GM Tim Connelly is still working to get an agreement with restricted free agent centerTimofey Mozgov, sources said. The Hickson deal doesn't deter the franchise's desire to bring the 7-foot Russian center back on a multi-year deal. Story here from Woj at Yahoo! Sports.

At $5 million per season this is a very curious signing. Hickson did average 10.4 rebounds for Portland last season, but just 6.8 over his career. He has been in the league since 2008 after being the 19th pick by the Cleveland Cavaliers. He will be joining his fourth team in his sixth season. 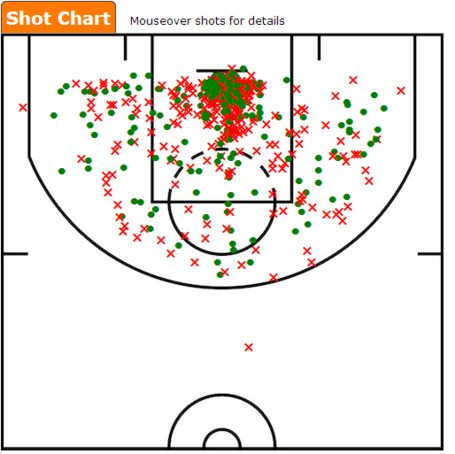 Hickson did play some center for the Blazers and could be a big man option for the Nuggets in the middle, but he's a natural power forward. The frontcourt is suddenly overcrowded with Kenneth Faried, Darrell Arthur, and Anthony Randolph at the power forward spot and JaVale McGee at the center position. And Mozgov is still in the mix to return.

Nuggets GM Tim Connelly said that he was trying to clear up a little logjam at the center spot when he traded Kosta Koufos away and now he has signed a Faried clone. Hickson has a little bit of a jumper, but not very much. He's a rim runner and rebounder, but has major question marks on the defensive end.

Connelly also stated he wanted more defensive rebounding and Hickson can help there, but at the expense of whose minutes? Again, very curious signing by the Nuggets and one that creates more questions than answers.

We will see what's next for the Nuggets.