2013 NBA Draft: Getting to know Nuggets prospect CJ Harris out of Wake Forest

One of the most productive players in Wake Forest history is trying to impress the Nuggets coaches and front office guys.

Share All sharing options for: 2013 NBA Draft: Getting to know Nuggets prospect CJ Harris out of Wake Forest

The Denver Nuggets have held two predraft workouts and C.J. Harris, the senior guard out of Wake Forest, took part in both of them. The sharp-shooting Harris warranted another look by the Nuggets. From his bio page at Wake Forest:

Four-year letter winner and three-year team captain who will go down as one of the most productive players in program history ... Two-time third team All-ACC honoree ... One of eight players in school history to serve as team captain for three seasons ... Developed into one of the top guards in the ACC ... Excellent outside shooter who could also get to the rim ... One of the most accurate free throw shooters in the country who led the ACC in free throw percentage as a junior and again as a senior ... Most comfortable at the off-guard position but could also play the point ... Solid defender with a high basketball IQ ... Local product who grew up just minutes from campus.

He averaged 15 points in his senior season to go along with shooting 43% from three-point range and 84% from the free throw line. Those are two areas where the Nuggets are definitely looking to improve. Harris is 22 years-old and doesn't have the best size for a shooting guard at 6'2", but he could be groomed to run the point in the NBA.

"CJ had a really good college career at Wake Forest," said Nuggets scout Mike Bratz. "He's another combo guard that is maybe not quite ready to be a point guard in the NBA, but if he improves his handle, his passing ability - he's a good scorer - he'll have a chance."

Harris is not projected to be drafted, according to Draft Express' latest mock draft, but it's always a good idea to get familiar with guys and there's a great chance he could sign with a team like Denver to play Summer League and perhaps earn a shot to make the team at training camp.

"I wanted to get to know him a little bit," said Bratz. "I saw him play quite a bit in college and wanted to give him a chance to come down and meet our staff."

That's Harris the player, now let's get to know him a bit more Q&A style with the man himself.

Nate Timmons: What were you planning on doing with your Communications major?

C.J. Harris: Once the ball stops bouncing, something in front of the camera. Sportscasting, broadcasting, or something like that.

NT: The next Reggie Miller or Charles Barkley?

NT: What players did you admire or watch growing up?

CJ: I've always been a Kobe [Bryant] fan, a Michael Jordan fan of course, but Kobe is my all time favorite player.

NT: If you were stranded on a desert island - would you rather be stranded with Shaquille O'Neal or Charles Barkley?

CJ: Charles Barkley, he'd have me laughing for days.

NT: You're on the brink of the NBA, once you're established would you rather have your own shoe deal, your own videogame, or your own restaurant?

CJ: A shoe deal would be pretty cool - get to wear your own shoes. Definitely a shoe deal.

NT: On a guesstimate, do you own a lot of shoes?

NT: Are they all sneakers or do you mix it up?

CJ: I switch it up a little bit. I like hard tops, slippers, all different kinds of shoes. Most of them are Jordan's and Nike's.

NT: What are your favorite retro Jordan's?

CJ: Either the Chicago Bulls 10s or the black and red 11s. 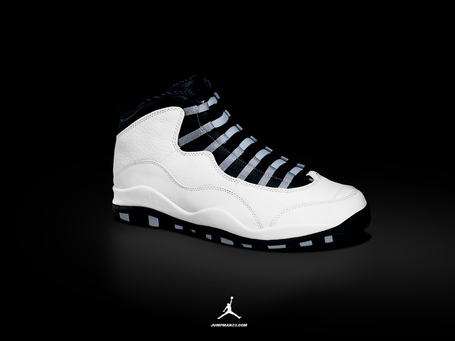 The Jordan 10s via fermat.unh.edu

NT: We're on MTV Cribs and we open your refrigerator. What do we find?

CJ: I love lemonade. What else would you find ... yogurt, I eat pretty healthy. A bunch of sandwich stuff.

NT: How about on a cheat day?

CJ: (No hesitation) Pizza, I have a weakness for pizza. Pepperoni, just plain classic pepperoni and cheese.

NT: What would we find you doing on an off-night?

NT: Did you see Iron Man 3? They mention Thor in it, but nobody comes to help Iron man out.

CJ: They left him hanging.

NT: At some point in your basktball career, let's say Hollywood comes calling and wants you to star in a movie. Would you want that movie to be a comedy, action, horror, or Sci-Fi film?

CJ: Action. I always wanted to shoot [weapons] and do some crazy 007 stuff.

NT: Would you do your own stunts?

CJ: I'll do the shooting, but I'm not doing jumping off buildings and stuff.

CJ: The Great Gatsby was great.

NT: Did you like the story line? I found it hard to like any of the characters.

CJ: I really liked it, I thought it was great. Gatsby was probably my favorite character. He was kind of crazy, but at the end he was the good guy.

NT: We've seen some good players come out of Wake Forest, will you be the next one?

CJ: I definitely hope so, I put a lot of hard work into it so hopefully it pays off in the end.

NT: One of the best Wake Forest players to play in Denver was Rodney Rogers. Are you familiar with him?

CJ: I know he was a beast in college. He actually came back [to Wake Forest] and spoke to us two years ago.

Talking with all these prospects has been great. They've all been very friendly and engaging. With that said, it was really good talking with Harris. He's a very sharp young man and I hope he realizes his NBA dream - he's an easy guy to root for. Now check him out killing North Carolina from beyond the arc ...