Share All sharing options for: Masai Ujiri voted Executive of the Year by fellow general managers

Nuggets Executive Vice President of Basketball Operations Masai Ujiri gave a very passionate speech today at Pepsi Center. He thanked folks who helped him along the way and talked about trading in the award for a shot to still be playing in the post-season.

Like Ujiri said, this award is a little bit different. The press does not vote on the Executive of the Year - it's an award voted on by the members of all NBA front offices. You can check out Ujiri's press conference video by clicking here. And here is how the voting broke down: 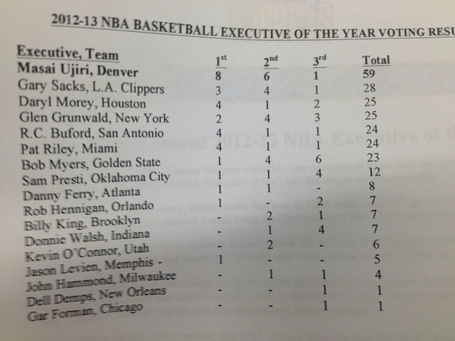 I tend to think of this award as a cumulative one of Ujiri's work in Denver thus far, but it's voted on for the work this season and here is what Ujiri accomplished in the off-season with the Nuggets:

3.) Re-signed Ty Lawson to a 4-year, $48 million extension. Could Lawson have gotten more money this off-season had he waited to ink a deal?

4.) Re-signed JaVale McGee to a 4-year, $44 million extension. A deal that will hopefully start to pay off this coming season as McGee was signed based off potential. A risky deal, but not a salary cap killer if McGee doesn't pan out.

6.) Traded for Andre Iguodala in a three-way trade that sent Arron Afflalo, Al Harrington, and a 1st Round pick (2014 - the least favorable pick of either Denver's or New York's selection) to the Orlando Magic.

A fairly busy off-season for Ujiri, Pete D'Alessandro, and Josh Kroenke. The Iguodala acquisition will be viewed as either a success or risk based on what he does this summer. If he comes back to Denver, that goes a way in showing that the Nuggets are an attractive franchise to a player that wants a shot to win the title.

There were certainly other general managers deserving of votes. Glen Grunwald of the New York Knicks made plenty of moves to get that team the No. 2 seed out East. Gary Sacks of the Clippers did a nice job filling that team with veterans (didn't get a quality big man to play in crunch-time, lost both Reggie Evans and Kenyon Martin). Bob Myers of the Warriors did a wonderful job getting Jarrett Jack and Carl Landry in free agency and drafting three rookies that are blossoming in the playoffs in Harrison Barnes, Draymond Green, and Festus Ezeli. And you have Daryl Morey who brought in James Harden, Omar Asik, Carlos Delfino, Jeremy Lin, and Patrick Beverley (and traded for a lotto pick in Thomas Robinson).

Having this award voted on by other general managers and front office executives is really an honor for Ujiri. Now, let's just hope the Nuggets can sign him to an extension.