With all the hardware the Nuggets have been collecting this off-season, it's a surprise that one player gets snubbed.

Share All sharing options for: NBA announces All Defensive teams, Andre Iguodala left off both teams

The All Defensive teams have been announced and according to Scott Howard-Cooper of NBA.com no Denver Nuggets players made the list. This honor is voted on by the coaches around the league. The two teams break down as follows:

PG: Chris Paul - surprising pick here as Paul's defense was not his strong point this season.

SG: Tony Allen - one of the best in the business on the defensive end.

SF: LeBron James - the key cog to Miami's defense and it is a good defense.

PF: Serge Ibaka - proving that coaches value the blocked shot more than they care to let on.

C: Tyson Chandler - not the force he was last season, appeared in just 66 games.

C: Joakim Noah - tough defender on one of the best defensive teams in the league.

Chandler and Noah tied for votes for first team center.

SG: Avery Bradley - appeared in just 50 games this season, but he has a great defensive reputation.

SF: Paul George - the Most Improved Player and one heck of a defender.

C: Marc Gasol - the Defensive Player of the Year easily should be a first team guy. 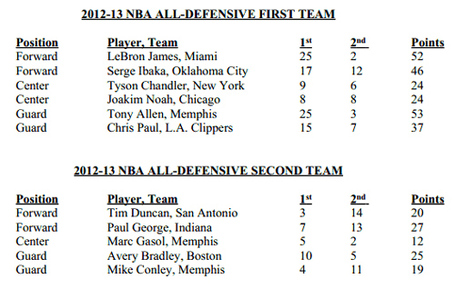 Andre Iguodala - appeared in 80 games and transformed the Nuggets defense. Iguodala was tasked with taking on the likes of James Harden (18.3 points per game vs the Nuggets and 25.9 ppg this season) every night. Ranked 5th this season in steals per game with 2.0 - behind only Russell Westbrook (No. 1), Monta Ellis, Brandon Jennings, and Tony Allen.

Iguodala's presence with the Nuggets greatly improved the defense and it could be even better if he's back with the team next season. No, the Nuggets were not a great defensive team, but they were improving and Iguodala was helping to change the defensive culture of the squad.

Roy Hibbert - another good center on a good defensive team. He anchors his squad.

Russell Westbrook - led the league in steals per game this season.

Luol Deng - another good defender for the Bulls at the wing position.

From SI.com on other players that received votes with first place votes in (parenthesis):