The Nuggets got a season saving victory in Game 5 and walked away with a closer than should have been 107-100 victory. There will be a Stiffs Night Out for Game 6 in Oakland!

"They were the more physical team," said Warriors head coach Mark Jackson. "They were the aggressor. They hurt us in the first half."

"They tried to send hit men on Steph [Curry]," said Jackson. "But I give them credit. There were some dirty plays early. It's playoff basketball; it's alright. Make no mistake about it: we went up 3-1 playing hard, physical, and clean basketball, not trying to hurt anybody."

Jackson had some choice words on Kenneth Faried's game tonight too.

"[Kenneth] played well. He impacted the game, he did a good job. He set some good screens, some good illegal ones too. He did his job. I've played with guys like that; you are paid to do that. Dale Davis, Anthony Davis, Charles Oakley. You are paid to do it so I give him credit. As an opposing coach, I see it and I am trying to protect my guys."

Jackson was asked how the Nuggets were trying to harm Steph Curry.

"I am not going to get into specifics," said Jackson. "You can take a look at the game. The screen on Curry by the foul line is a shot at his ankle, clearly. It can't be debated. I have inside information that some people don't like that brand of basketball and they clearly didn't co-sign it so they wanted to let me know that they had no part in what was taking place. Let the best team win and let everybody, with the exception of someone going down with a freak injury, let everybody leave healthy. That's not good basketball."

Here is video of the play Jackson was talking about with Faried and Curry - credit to the CBS Sports.com crew, specifically Royce Young and Matt Moore, for passing along this video - click here to see what Royce had to say about the play and more video on Jackson's post-game comments:

George Karl left his press conference with this thought:

He actually played both, sort of ... Green appeared in two plays during the 2011 Green-and-White spring game. One play he was called for a false start and the other - a pass sailed over his head. 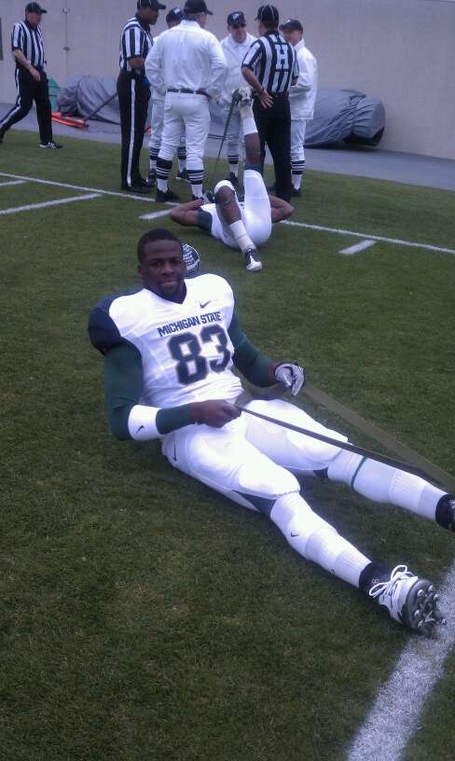 Draymond Green at Michigan State during his football days.

It's safe to say that things got a bit chippy out on the court and for some reason Jackson wants to open a can of worms by accusing the Nuggets of purposely trying to injury somebody. His team is up 3-2 and heading home. Why give the Nuggets some bulletin board material? Perhaps Jackson is letting some of the pressure get to him? Jackson is likely trying to pull a "Phil Jackson" and get his team some cheap whistles in Game 6 ...

On a night where the Nuggets got back to playing their brand of basketball, the Warriors' coach would rather focus on conspiracy theory than why his team lost the game. I will take that as a positive sign.

The Nuggets came out strong in the first quarter and in the first half. Denver took a 36-22 lead in the opening quarter and things would have been much worse had Harrison Barnes not connected on three of his five long-range attempts. Barnes was about the only guy the Warriors could count on early. He had 13 points at the half and 19 by the end of the third quarter. He finished with 23 points on 7-17 shooting, but was only 0-2 in the fourth and he looked a little gassed on his last couple shot attempts.

The Warriors as a whole seemed winded during various parts of the first half. Credit JaVale McGee for making them work inside and credit the Nuggets trapping defense for creating 10 turnovers in the first half (five in each quarter). The Warriors only committed 7 turnovers in the second half (17 total) and that can be attributed, in part, to why they were able to get back into the game.

Another big reason the Nuggets coughed up a big lead in the second half is because they went away from what was successful throughout much of the first three quarters. Playing big and playing aggressive. Starting McGee was George Karl's first successful adjustment in the last few games. Playing Andre Miller for large chunks of the second half almost completely backfired. Miller was -5 for the game in the +/- department and he was an atrocious -14 in the second half.

Miller's slow it down game and defense can be blamed for a bit of the Nuggets' woes, but Corey Brewer's off night didn't help either (1-11 shooting for 4 points including 0-5 from deep). Denver played without a center and the Warriors took advantage by going to the rim and again testing Denver's rotations as guys were worried about penetration in the key.

Miller did have a big bucket late and a nice alley-oop to Faried, but Ty Lawson should have been running the show and Denver should have gone to a longer defender instead of Miller - based on the +/- numbers. To the rescue was Denver's starting lineup.

The starters accounted for 86 of the team's 107 points and all five starters scored in double-figures. Iguodala led the charge with one of his finest offensive performances as a Nugget and surely his best effort on offense in the post-season. He was 10-17 (3-6 from deep and 2-2 at the free throw line) from the floor for 25 points, had 12 rebounds, and collected 7 assists to go along with 2 steals, 1 block and just 2 turnovers.

When it wasn't Iguodala scoring in a variety of ways, it was Wilson Chandler providing long-bomb support -- the aerial attack! Wilmatic was 5-11 from long range and put up 19 points on the night. It must have been nice to get out of post-defense and focus on the offensive end - credit Karl there too.

The effort put forth by the Nuggets tonight was exactly what this blogger wanted to see. From Faried, to JaVale, to Lawson, to all the Nuggets -- well played game. Even credit to Julyan Stone for coming in and pestering Curry for the nearly five minutes he was on the floor in the second half.

Is this a big victory for the Nuggets? Did they send a message to the Warriors? I do credit Jarrett Jack and Company for getting back into the game and for not giving up. It'll take a near perfect game to earn a victory at Oracle. That crowd will be r.o.c.k.i.n.g.

The Nuggets showed not only do they have heart, but that they can play their game. Denver also, obviously, showed that they can play physical too. Andrew Bogut was a non-factor tonight and the Nuggets did an excellent job of challenging him, standing up to him, and taking him out of his game. The Denver defense played big and bothered Klay Thompson and Curry for much of the night.

-The Warriors led the fastbreak points department with a 10-9 slight edge.

We will have a STIFFS NIGHT OUT FOR GAME 6! CLICK HERE!!!!