The Nuggets are now the underdog against the Warriors, a position they're more familiar with than that of the favorite. After a thrilling Game 1, losing two consecutive games and home court advantage in the process has the Nuggets on the ropes.

Even though tonight isn't technically an elimination game, it may as well be one.

If the Nuggets lose a third straight game, they must then turn around and win three straight themselves to avoid another humiliating first round exit. Two of those three games would (will?) be at the Pepsi Center, but as Games 1 and 2 showed us, the Warriors are fully capable of competing and beating the Nuggets in their house - something that was unheard of by any team not named the Wizards or the Timberwolves during the regular season.

During the regular season, Denver outrebounded their opponents by 3.4 caroms per game, good for second in the NBA only to Indiana's 5.0. However, Golden State was right behind Denver, outrebounding their opponents by 2.3 per game. Despite Denver's regular season rebounding differential advantage, the Nuggets are being outhustled off the glass by an average of 9.3 boards per game in this series. Nine extra times to secure possession for another Curry three, or to take away the possibility of a Nuggets layup or putback. These extra possessions stretch an already struggling perimeter defense even further, limit easy looks in the paint and are perhaps the single biggest factor behind why the Nuggets are now losing this series.

1. If Ty Lawson is on the floor, Andre Miller is not (and vice versa)

2. If Andre Miller is on the floor, Andre Iguodala plays the shooting guard position.

3. Ty Lawson plays twice as many minutes as Andre Miller.

I realize this goes against Karl's preference for two point guard lineups, but I feel it's necessary: simply put, the Nuggets are losing because they are getting outhustled on the perimeter. Andre Miller is a big part of that. He is an amazing playmaker and is fully capable of putting the team on his back offensively, but his defense on the outside is virtually nonexistent at this point in his career. When Ty Lawson and Andre Miller are forced to check Stephen Curry and Klay Thompson together, the Nuggets just cannot contest them well enough through the series of picks and screens this Warriors team is so capable of executing. I realize that by playing Iguodala at the 2, the Nuggets will limit minutes for Evan Fournier with the second unit, but he is simply not as good a perimeter defender as the Nuggets need when Miller plays the point.

By pairing Miller with Iguodala whenever he's on the floor, the Nuggets can continue the switching they're so fond of, so long as the forward - Brewer or Chandler in this scenario - is prepared to make the third rotation and crashes the defensive glass. The Warriors are too familiar with how Denver likes to get out and run, and the continual leaking out after a shot goes up has hurt the Nuggets on the defensive glass. While getting back for the board will restrict some of fast break opportunities for the Nuggets, it'll also limit how many second chance threes the Warriors get - something which has killed the Nuggets in these three games. This means that after hard traps employed so effectively in the first half of Game 3, Kosta Koufos, Kenneth Faried, Anthony Randolph and JaVale McGee must attack the rebound. Ultimately, if the Nuggets don't outrebound the Warriors this game, they will probably lose again.

Much has been written about the defensive inconsistencies, the rotations Karl has employed, and the fine adjustments this squad needs to make. Everyone knows that the Nuggets must play better on almost every fundamental front - shot selection, perimeter defense and rebounding especially. The Warriors have knocked an overconfident Nuggets squad on their collective asses, and it's time for them to get up and get back on the glass. This team realizes that they are two short games from ironically rendering their franchise-best regular season as entirely meaningless as eight other regular seasons leading to first round exits in the last 10 years. Yet during the last game, you could see - in the first half, at least - the stirrings of the monster that won 57 regular season games.

Tonight is the night where this Nuggets team finishes waking up, gets up and on the glass, and takes a tied series back to the Pepsi Center.

Note: Our friends at the "Mile High Club" have tickets remaining for Game 5 on Tuesday (April 30th) in Denver. If you'd like to get in on the best playoff section in Pepsi Center - hit them up on Facebook by clicking here. And as always, they have awesome shirts for everyone in the section - picture below: 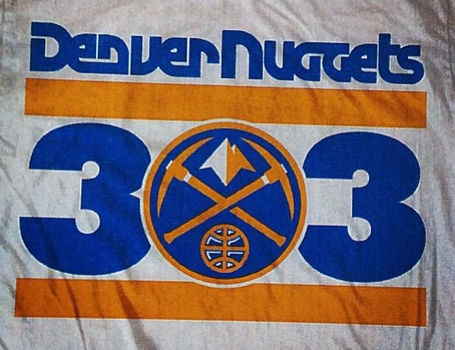