Ty Lawson: Key to defending Stephen Curry is to not give him space, force him to drive

Share All sharing options for: Ty Lawson: Key to defending Stephen Curry is to not give him space, force him to drive

If you combined the three-point attempts of Corey Brewer (3.7) and Andre Iguodala (3.6) you get just 7.3 attempts per game - they lead the Nuggets in that department. Stephen Curry takes 7.7 three-point shots per game and hits, on average, 3.5 of those for an astounding 45.3-percentage.

Curry also set the NBA record for most three-pointers made in a season by hitting 272 threes out of 600 attempts. So yeah, defending him is priority number one for the Nuggets.

"Watching tape, he really wants to get space to shoot. I think his last option is to drive." -Ty Lawson on Steph Curry

"Just try and make him drive," said Ty Lawson. "Watching tape, he really wants to get space to shoot. I think his last option is to drive. Get him to drive and not let him get in a rhythm shooting the ball."

On the flip side, how is Lawson going to attack Curry?

"I am going to try to work him a little bit," said Lawson. "Try to get a couple fouls on him. Him not being in the game is a great advantage to us."

Having Curry on the bench would be a great assist to the Nuggets. Curry averaged 18.5 points and 5.8 assists against Denver this season - including an incredible 66.7-percent (4.0-6.0) from long-range.

Asked to explain how Curry got to be such a tremendous shooter, George Karl had little trouble rattling off many of Curry's strong points.

"It might be genetic," said Karl. "I know his dad was a great shooter. It's amazing [Curry's] probably a better shooter [than his dad, Dell Curry]. He has a quick release, he gets his feet ready, he has great balance, he shoots the ball with his legs very well, and his release is perfect."

"I coached Dell Curry for a couple years," said Karl. "He was great. Younger Curry is a much better handler and can play make and be a point guard as where Dell was more just a shooter. [Dell] helped me win a few games in my career."

Lawson played Curry very well this season and Karl backed that up when asked if Andre Iguodala would be tasked with stopping Curry.

"I think we'll start with Ty on him," said Karl. "But I think throughout the game [Iguodala] will cover [Klay] Thompson, Curry, maybe [David] Lee, maybe everybody."

I don't blame Karl for not wanting to give away his entire game plan leading up to Saturday's Game 1 in Denver (3:30 p.m. MT tipoff). Karl did like that he has defensive options on this team.

"It's fun to go into games with a defensive mentality," said Karl. "Knowing we can move A.I. anywhere we want to move him. He could end up covering four or five different players in this series. We'll come up with our game plan, but usually to win four games you might have to adjust that game plan two or three times."

"They have two of the best shooters in basketball," said Karl. "And they have an enthusiasm to play the game with confidence. They have a very good front line player in David Lee and a lot of big guys. They are a very skilled basketball team."

David Lee is another problematic player. We still do not know if Kenneth Faried will be ready for Game 1, Game 2, or Game 3. He was out doing some light shooting today and testing his ankle a bit by hopping up-and-down a few inches. 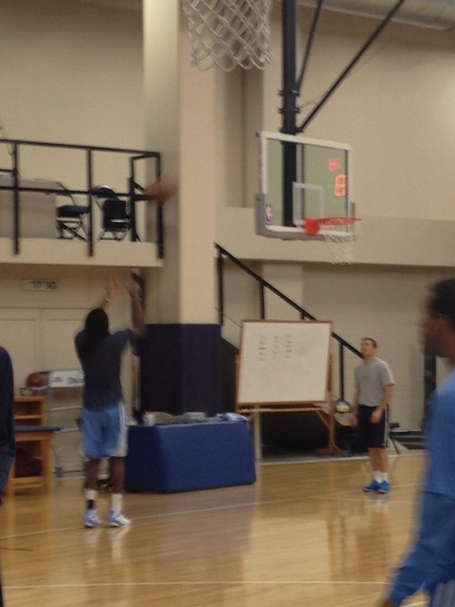 Lee is a dangerous player who has carved up the Nuggets this season by averaging 23.3 points and 10.3 rebounds per game in about 40.3 minutes per game in four games.

"I think he's a very efficient player," said Karl. "When he touches the ball, usually good things happen. He can pass it, very good offensive rebounder. He can fill the stat sheet up. He doesn't have a weakness to his game. He can get fouled, knows how to post up, can face, and can run the pick-and-roll game with Curry very very well."

The pick-and-roll ... the Warriors have many ways to attack and many players in which they can attack with. In addition to Curry, Lee, Thompson, and Harrison Barnes in the starting lineup; the Warriors feature a deep bench led by guard Jarrett Jack and forward Carl Landry.

"I thought that was the key for them becoming as good of a team as they've become," said Karl. "When they signed those two guys this summer; I think it has worked out above-and-beyond what I thought they could do. They give the young guys a chance and then these two veterans come in and calm down or settle anything or any problem that is going on in the game - one inside and one outside. I think their best lineup is Jack at the point and Curry and Thompson running around on the baseline."

The Nuggets will have another full day of practice before their afternoon game on Saturday. Stay tuned to Denver Stiffs for more analysis, coverage, and predictions.

"I think Mark Jackson brought in that winning attitude," said Karl. "The passion to play the game the right way. The passion to defend first and [then] offense will happen. You can see a lot of Mark Jackson in their guard play. Their guard play is very much into finding the shooters and getting the shooters the ball on time. Mark was very good at that with Reggie [Miller] and a lot of other guys in his career.