19 turnovers and 18 fouls doomed the Nuggets to a loss in Dallas tonight. They couldn't hold onto the ball to save their lives, while Dallas utilized a 15-0 run in the third to turn the tables on the listless Nuggets. Mavericks win in OT, 108-105.

Dirk Nowitzki refused to go quietly into that Texas summer. He ended the Nuggets' five-game streak and wants to give the Mavs one of their own heading into the sunset.

He was superb tonight, connecting on a variety of his patented rainbow jumpers and stepbacks. For some reason, the Nuggets seemed content to sag off of Dirk on more than one possession, when that is the absolute last thing you can do against Dirk. Kosta Koufos, Andre Iguodala, JaVale McGee, Wilson Chandler - it didn't seem to matter who the Nuggets threw at Dirk, he shot over all of them en route to a team co-high 22 points. I can't help but wonder how a 6'10" Danilo Gallinari would have fared while guarding Dirk.

It was great to see Ty Lawson play tonight, even though he was strictly limited to 19 minutes off the bench. It's very important for Ty to get some run in a full-speed game (not just practice) as preparation for the playoffs. He was very effective, scoring 13 points on 5-7 shooting with 3 assists, 2 rebounds and no turnovers. He looked markedly better than in his last game at San Antonio, and though while still tentative off the dribble, seemed to have his legs under him. He was hitting tonight, and it was great to see the speedster back on the floor. Hopefully, this means increased minutes in the three remaining games as Ty works himself back into game shape.

Despite a couple of dumb turnovers, JaVale McGee continues his run of good play. He had some monster blocks, kept his composure, and scored 11 points and 9 rebounds on 5-6 shooting. As McGee gets more and more time, we're seeing his on-court IQ increase commensurately. He had a nice moment where he acknowledged that he should have simply grabbed an awkward Shawn Marion set shot, and actually stopped after getting a rebound in the backcourt to hand it off to Miller, instead of awkwardly dribbling into the frontcourt.

Let it never be said that Corey Brewer doesn't play with hustle game in and game out. However, I would really wish he would recognize when his shot isn't falling (particularly from deep) and take more shots on drives to the rim. He shot a horrific 6-20 from the floor and turned the ball over 3 times en route to 18 points. He made just 2 of 9 attempts from beyond the arc, which led to long rebounds for Dallas and easy shots in transition. He did chip in 5 steals (including an amazing one with just 4 seconds left, which led to his game-tying layup), but they were definitely outweighed by his poor shooting from the floor. Kosta Koufos was also quietly awful with 6 points on 3-9 shooting, continually failing to convert easy chip shots at the rim. He saw just 19 minutes.

While the Mavericks played with an admirable effort (4 players in double figures, three with 20+) the Nuggets ultimately shot themselves in the feet repeatedly with 19 truly awful turnovers and getting beaten on the glass by 6. Every Nuggets' hands tonight seemed like they were coated with teflon, with normally-caught passes instead being deflected into Mavs' hands and out of bounds. They also fell in love with the three pointer - a familiar recipe for disaster from earlier in this season - and shot just 8-24 from behind the arc. The team seemed a bit discombobulated with some of the defensive rotations as well.

With under a minute remaining out of a Dallas timeout, Miller sagged off O.J. Mayo behind the arc to double Brandan Wright (??????????), leaving a wide-open O.J. Mayo to put the Mavericks up three.

As pointed out by one of our great commenters, sensemaking, there was more to this play:

After an inbounds play which left the ball in the hands of Vince Carter and Brendan Wright diving towards the basket, JaVale McGee jumps at a hot-shooting Vince Carter while Andre Iguodala tries to deny the pass to Dirk. 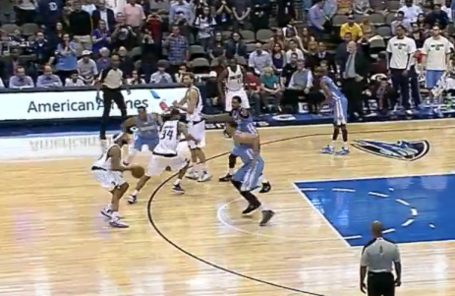 However, as JaVale jumps, Carter threads the needle to Dirk. 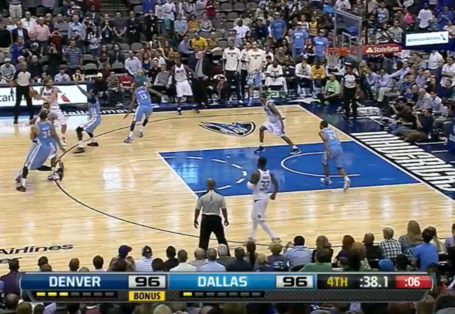 Chandler leaves the diving Wright to cover Dirk above the arc, and Corey Brewer rotates to cover Collison. Andre Miller had sagged off OJ Mayo to prevent a shot at the rim by Wright (itself an unpalatable scenario, yuck), and was sucked 15 feet off Mayo's position. Recognizing the mismatch, JaVale hustles back to stop a potential Wright layup, as Andre Miller simultaneously makes the same decision. Instead, Dirk passes to the open Mayo, who drains the three despite a desperation closeout by Miller. It's very true that you could have expected McGee rotate to cover Mayo, but his instinct was to go for the big in the paint. As Mayo was Dre's original defensive assignment, I would have preferred he keep in closer defensive touch, but it's a very difficult situation for the defense to be in on an incredibly well designed play. Great design by Dallas head coach Rick Carlisle.

Dre redeemed himself somewhat with one of two made free throws just moments later, but still - Miller's defense is going to be something which will continue to confound this team heading into the playoffs. I feel like I'm too hard on Miller sometimes, but his defensive effort is truly awful in most games. Usually, his playmaking on offense is enough to balance out the defensive deficiencies, but shooting 2-12 with four turnovers, including a critical one with just 1:20 left in OT is not going to cut the mustard no matter who the Nuggets are playing. One of his two made shots was a three pointer. Sheesh. Frankly, Andre looked out of it for much of the game, and I would very much have liked to see a few more minutes from both/either Lawson and Evan Fournier over Andre's 38 minutes. 38 minutes for your 37 year old point guard who wasn't athletic when he was 27, Karl.

Marc Davis' feud with the Nuggets continues. The officiating was absurdly lopsided while the Nuggets were on offensive drives to the hoop, getting hacked and grabbed all night with almost no recognition from Leon Wood or Violet Palmer, either. The Nuggets didn't blow this game because of the superstar calls that went Dirk's way or the numerous times they could have been at the stripe, but it certainly helped. Note: Dallas [apparently] did not commit a foul for the entire third quarter. Sure, whatever you say, Marc Davis.

Give the Mavericks some credit. The Nuggets pissed away an 11 point lead by letting the Mavericks go on a 15-nothing run in the third quarter, but I think that's a direct result of the embarrassing loss suffered to Phoenix just two days earlier. They could have simply rolled over and let the Nuggets blast them off the floor, but they didn't. With the Memphis Grizzlies defeating the Houston Rockets, the Nuggets are now tied for the 3rd/5th seed. Up next are the tanking Blazers on Sunday in the Pepsi Center.