After seeing much praise around Denver with his improved play and gaining national recognition for his efforts, Wilson Chandler delivered in a big way for a Nuggets team who struggled for much of the night. He tied a career high with 35 huge points. Nuggets win in overtime, 119-118.

Tom Thibodeau shouldn't be that pissed about this outcome, but I guess I understand why. This game was poorly reffed on both sides, and it's pretty bad that he's allowed to get away with ripping Kenny Mauer a new one, while George Karl would have definitely been thrown out.

This game had an ugly, dirty feel from the get-go when the Nuggets opened the game shooting 2-11 from the field. The game began to turn as the Nuggets starters gave them some separation, but some late game defense and a clutch effort was enough to give the Nuggets the longest win streak since they joined the NBA. While Kevin Fehr and Ken Mauer were content to stare into the crowd and forget there was a game of basketball being played in front of them, the Nuggets were able to overcome their incompetence. I will say that I would have appreciated being informed that Joakim Noah would be afforded 6 additional fouls this game and a couple offensive goaltends, however. Fehr!!

Wilson Chandler, thanks for backing up all the love we've been giving you lately. You were absolutely special, contributed all over the floor, and this team would have lost by 10 or more without your efforts. Attacking the basket all night while the starters settled for jumpers, you tied your career high with 35 points on 13-21 shooting, collecting 9 rebounds, 4 assists, 2 steals, and just 2 turnovers in your 39 minutes on the floor. You were superb. Please stay a Nugget forever.

According to Scott Hastings, Ty Lawson was suffering from flu-like symptoms at the start of the game tonight and it definitely showed. He looked like he wanted to vomit every time he touched the ball. We got timid, first half of the season Ty tonight, and it nearly cost the Nuggets the game. He would drive inside, take a few tentative dribbles, then pass the ball out instead of taking it into the body of the defender. Lawson looked like a banana slug in a jersey, repeatedly going under screens to let Nate Robinson take open jumpers and drive to the basket. His shot wasn't falling, he could barely play defense, and generally looked like he shouldn't even have touched the floor tonight. Simply put, Nate Robinson clowned Ty tonight, and that's a sentence I hope never has to pour from my fingers again. Get well soon, Ty.

Like Lawson, Andre Iguodala's eyes were crusted over with some sort of film that caused him to shoot 3-14 from the field. He scored 12 inefficient points and collected 10 rebounds with 3 blocks, but ended up hitting a venomous three pointer that was critical to the Nuggets victory. His solid defense was superb as usual, but his shots tonight were out of rhythm. Apparently, when Iguodala shoots perfectly from the free throw line, it messes up his regular shooting.

JaVale McGee had a special game, despite the occasional defensive lapses and frustratingly fast post possessions. He should see an allergist to determine why a basketball coming off the rim or backboard causes his muscles to seize up, however. Joakim Noah got a firsthand look at McGee's flight superpower: 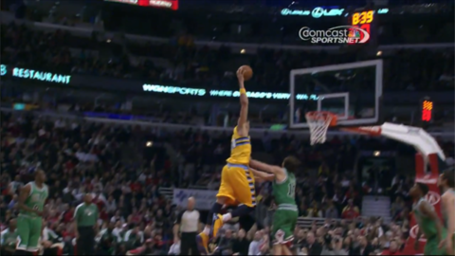 Dirty. Shoulda been an and-one, but I'll take the poster. Even with McGee shooting 6-8 from the field for 12 points and 3 rebounds, he saw just 20 minutes of play. I'm hesitant to insert him in late-game situations, but Karl simply has to find more minutes for the guy. He's incredibly efficient even with the mistakes, and if the Nuggets can find a way to give him his due, this team will blossom even further. He even had a goofy game ending pass deflection!

Andre Miller continues to make me gnash my teeth and pull my hair. You say McGee is frustrating and plays like a fool? I say look at the defense and mistakes of Andre Miller in critical moments. I will grudgingly give him props for an excellent game setting up his teammates with 13 assists, but his defense made Carmelo Anthony look like Bruce Bowen. He also had an all-balls take into Joakim "12 fouls" Noah with the game on the line, which helped the Nuggets take the game to overtime, so good for you, Andre. Please just remember that even though your teammates are getting better at rotating over to your blown coverages, they still need you to play some defense. Cheers.

The Nuggets bench tonight absolutely outplayed the starters, who looked fatigued and disinterested. Unfortunately, a critical "mistake" - which was actually absurdly lazy defense on a closing NateRob shot by "Anre" Miller - forced the Nuggets into overtime. Ultimately, it doesn't matter too much with a virtual schedule loss looming tomorrow anyway against the Thunder in OKC, but it's another big game and keeps the Nuggets tied with the Grizzlies for the 4th seed.

I'm pretty disappointed in Karl's end of game rotations. He failed to see how badly Lawson was struggling, even with Miller's defensive struggles, and went small for much of the 4th. Gallinari playing the 5 was atrocious. Can we please not see that tomorrow night against Ibaka?

Sheesh. What a game. I need a drink.