Riding an 11-game winning streak, Wilson Chandler returns to the site of his alma mater looking to chalk up win number 12 for this Nuggets team.

Can the Nuggets match their longest winning streak since leaving the ABA?

That's the question the team will look to answer tonight against an up-and-down Bulls team in Chicago. Just two days removed from being blown out by 42 points on the road against the lowly Sacramento Kings, the Bulls then took the commuter flight to northern California and mowed down the Golden State Warriors by 18. While the Bulls wobble between looking like a team trying to tank for the lottery and clawing for home court advantage in the Eastern Conference, these Nuggets have perhaps never looked as confident as they do now.

Much of that newfound swagger has come with "Ill Will"'s play this season. There's been a lot of Wilson Chandler love lately, and for good reason. Earlier in this 82 game campaign many identified that the Nuggets needed a dynamic scorer in the second unit to have all the pieces of this squad truly fit together. Some clamored to make a move to bring in J.J. Redick (who eventually signed with the Milwaukee Bucks) or another of a variety of 2 guards. Others preached patience, to see what this team would look like with someone other than Corey Brewer hucking the ball in the general direction of the backboard.

Patience has paid off.

Since Wilson Chandler's return, the Nuggets have gone 22-4 (echoing Andrew's excellent GN piece on Chandler's contributions!), winning 84.6% of their games. Without Chandler, the Nuggets are just 23-18. I've also had my eyes opened by Chandler's doughty defense. Like Iguodala, we've seen Chandler take up the assignment on players from 2-5, and he's mostly been solid. He and Iguodala have very similar frames and degrees of athleticism, allowing them to make any opposing team's perimeter offense a nightmare and provide at least passing interior defense. Meanwhile, Ill Will's been hot from beyond the arc (32-78, 41%), and I'm much more comfortable with him taking those perimeter shots than I am Brewer (29%). Below is a heat map of Wilson Chandler's scoring this year: 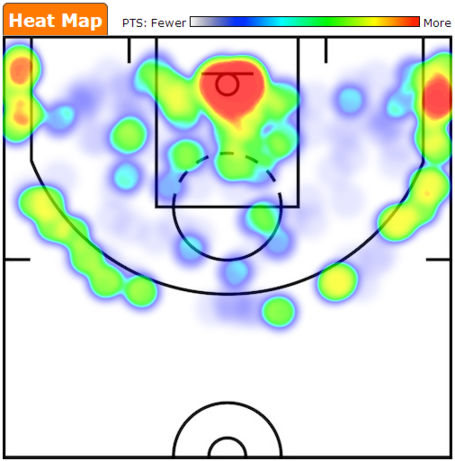 Chandler is comfortable taking and making shots from all over the floor, from driving dunks and layups to corner threes. While I don't always love his wing jumpers, he's at least shown that he's capable of draining a few with an open look. He's spacing the floor exactly how this slashing and cutting Nuggets squad needs him to, particularly with the second unit All-Stars in Brewer, Andre Miller, and JaVale McGee. Oh, and let's not forget that last time Chandler and the Bulls met, Chandler had perhaps his best game of the season, going 5-5 from beyond the arc (8-9 overall) with 2 rebounds, 2 steals and a game-high 24 points. Chandler's been an invaluable contributor to this team on both ends of the floor and this team is very lucky to have him playing at such a high level. Chandler will want to show DePaul University what its alumnus can do, perhaps giving him an x-factor after having some down offensive games of late.

Although this will be a test for a Nuggets team that has not visited an opponent with a winning record during this run, I'm confident the Nuggets should be able to continue their streak. While the Bulls slow it down, the Nuggets speed it up with murderous transition offense, an increasingly stifling perimeter defense and oops to everyone and anyone. The hot dog vendors in Chicago better watch out - Andre Miller might throw one their way. These Nuggets are simply a matchup nightmare for the Bulls, who are designed - like the Memphis Grizzlies - to be a grind-it-out half court team, predicated on limiting opponent scoring opportunities and taking open jumpers off their myriad half court sets. The Nuggets gamble on steals, constantly run and score the vast majority of their points in the paint.

While Luol Deng and Marco Bellineli are capable of getting hot from outside, the Bulls' offense is simply anemic without their injured superstar Derrick Rose - last in the league at just 92.4 points per game. Head coach Tom Thibodeau has long been criticized for grinding his team into dust by not managing minutes well over the course of the season, and not much seems to have changed, as many Bulls players have succumbed to injuries they may have otherwise avoided. Even when forced to play slower paced games this season, the Nuggets have been able to rise to the challenge, and there's simply no way the Bulls can match the Nuggets relentless offense.

REMINDER - THIS TUESDAY is March Madness Stiffs Night Out!

Our ninth Stiffs Night Out is one day away!

On Tuesday, March 19th we're going to kick off March Madness by watching the Nuggets take on the Thunder in Oklahoma City at 6pm from Jake's Food & Spirits. Free appetizers and 2-for-1 drinks will be served.

We will be distributing NCAA brackets for $10, with all of the proceeds going to the Denver Hooperz, a local non-profit that provide after school basketball programs to at-risk youth. Prizes - including tickets to the Spurs game on April 10th - will be given out to bracket winners. Also, the Colorado Sports Guys (Nate Timmons and Ross Martin) will be live podcasting throughout the event - and it's Nate's birthday!

Please RSVP here or on our Facebook event page. And we'll see you on the 19th!