Getting to know your Denver Nuggets: Quincy Miller

Let's get to know a bit more about Denver's 6'9" and 230 pound forward Quincy Miller.

Share All sharing options for: Getting to know your Denver Nuggets: Quincy Miller

Quincy Cortez Miller was born November 18, 1992 and is just 20 years old. In addition to playing with the Nuggets, Miller has spent time in the NBA-Developmental League, with the Iowa Energy, to work on his game.

Quincy grew up in Chicago and also spent time, during high school, in North Carolina. He played for USA Basketball in the 2010 FIBA Americas Under-18 Championships and attended Baylor University for his freshman season before jumping to the NBA. While at Baylor he earned Big 12 co-Freshman of the Year.

Who is your favorite actor?

"My favorite female actress is Lauren London and my favorite male actor is Denzel Washington."

Why is everybody's favorite actor Denzel?

"I don't know - because he always plays the part right. Always."

What's the most recent film of his that you've seen?

"Flight. It was awesome."

(She has also appeared in I love you, Beth Cooper, Entourage and the remake of 90210)

She plays the girlfriend who is from the suburbs, but pretends to be from the city?

So, are you a roller-skater as well? (There is a lot of roller-skating in ATL)

What's your favorite thing to do in the weight room or a different type of exercise?

What's your bench press up to now?

Is that more than it was before you came to the Nuggets?

Do you credit that to Steve Hess or to yourself?

"Some to myself; it can't all go to Coach Hess. I'm not going to give him all the praise, but he has definitely helped."

What's something about Colorado that you didn't know before you got here?

"The elevation I didn't know about until I got here. I didn't believe in it. I thought it was, 'Ok, yeah right,' but when you first run here - it's crazy."

Did you notice it when you came back from the Iowa Energy? How long did it take you to get reacclimated?

"Yes, definitely. When I first got it here took me about two weeks, but now it's like two or maybe three days."

Do guys on other teams ever bring it up? 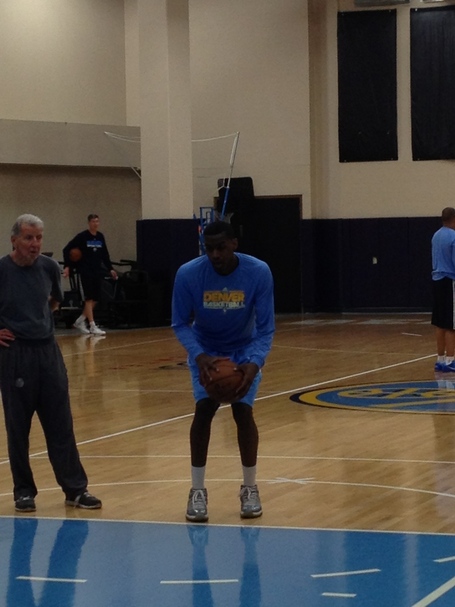 What have you been listening to lately? What's on your iPod?

"I listen to a lot of old school music: Biggie, Pac, Naughty by Nature. All kinds of old stuff."

Old stuff? That was the stuff when I was growing up!

"Cheesecake or brownies or cookies. I go to Asian Cajun and get the volcano cake, it's so good and they got the best crab legs."

"I like both. I don't play videogames as much, but I play them sometimes and I read sometimes."

How about a recent book?

What do you like to do away from the basketball court?

"I just like to have fun. Anything that has paintball or going to the mall and just chilling."

Have you gone paintballing anywhere in Colorado yet?

We'll have to get some suggestions for you on where to go paintballing. 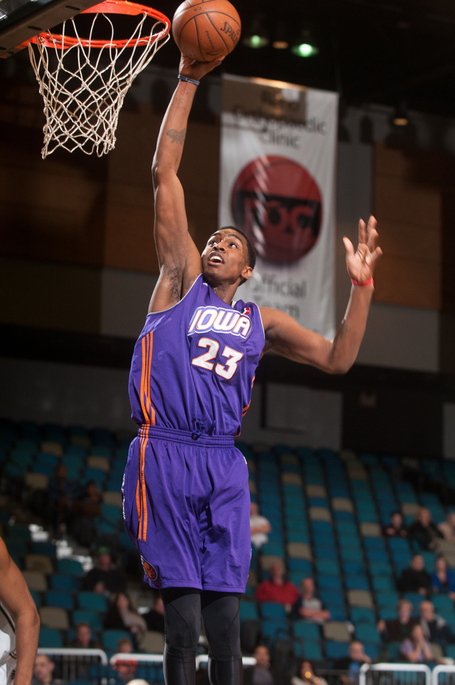 Who would you say you're closest with on the team?

Who was your favorite athlete(s) growing up?

"They're killers, they're big, and they dribble like me."

If you weren't playing basketball, what would you be doing?

"Trying to pursue being a doctor."

How about a hidden talent?

Who was your role model(s) growing up?

"My mom. Her perseverance through different things shows a lot about her character."