This one was a laugher that was over when the teams headed to the locker room ... at the half! Nuggets win 117-94.

"I think it's time to let everything go," said George Karl.

What a weird night of basketball at Pepsi Center. So much build up from media and fans alike. Carmelo Anthony received a good amount of boos from the home crowd during introductions and the booing continued during the game whenever he touched the ball. Melo headed for the locker room with over 9:00 minutes to go in the third quarter, never to return. His sore left knee needed the rest (Melo is heading back to New York to rest his ailing knee).

The other former Nuggets who played (Kenyon Martin, J.R. Smith, and Ray Felton) also received some boos. Definitely a lot of emotion from the fans -- it was like a playoff game as the crowd hung on every possession and was ready to erupt on every big play by the home team. The game itself didn't turn out to be as good as the chatter around the interwebs and office coolers today.

Tonight's game was a look at what could have been in Denver. The Nuggets could have been saddled with a player making over $20 million per season and tasked with putting enough pieces around him to remain competitive in the cutthroat Western Conference.

The Nuggets ran circles around Carmelo Anthony and his New York Knicks. Denver took a 64-42 lead into the locker room and that was a wrap; everything that happened after was icing on the cake. Not surprisingly, it was former Knicks Danilo Gallinari (14 points) and Wilson Chandler (13 points) leading the way in the scoring department in the first half -- Gallo finished with 16 points on 4-13 shooting and Wilson finished with a team-high 24 points on 9-12 shooting. Ty Lawson (5 assists), Andre Iguodala (3 assists), and Andre Miller (3 assists) paced the playmaking for the Nuggets in the first half and Kenneth Faried was all over the glass with 3 offensive boards and 4 on the defensive side.

Lawson would finish with 13 points and 7 assists in just 26 minutes of action. Iguodala with 14 points and 6 assists. Faried with 11 points and 10 rebounds. It was a fine performance from Denver. It was also a gutsy performance from Anthony. He faced the music of the boos and even bigger - he played through an injury for as long as he could.

Going younger does not meaning getting worse. Not with this Nuggets team. The third youngest team in the NBA came out and won their 10th game in a row - a feat George Karl had not accomplished with Denver. And along the way Gallo surpassed 500 three-point makes (only 1-8 from deep on the night).

This was easily the most uncompetitive game of the season for the Nuggets. The Knicks waved the white flag early in the third and we didn't get to learn exactly how much better these Nuggets are than those Knicks, but the first half was a good indicator. Melo finished with just 9 points on 3-12 shooting in 21 minutes of action.

What we learned about the Nuggets? They show up for big games. That could bode well come playoff time, but we'll have to wait and see on that. For now, Nuggets fans got to enjoy a little revenge against the Thuggets-era guys playing out East.

There is a monster game coming up on Friday and perhaps it was good that this wasn't a tightly contested game as Denver has bigger fish to fry on March 15th.

Like Karl said - it's time to let things go. Denver fans had their night to boo and the team crushed the Knicks. The Nuggets are in a better place thanks to the Melo trade and the Melo-man is where he wants to be. The best moment for me was realizing that the cheers for the Nuggets players were louder than any boos for Melo.

This is a special Nuggets team and the fans are recognizing that. Well done Nuggets.

Showed this picture to Wilson Chandler after the game in reference to Matt Moore and Kyle Speller (Nuggets announcer) calling Wil: Wilmatic. 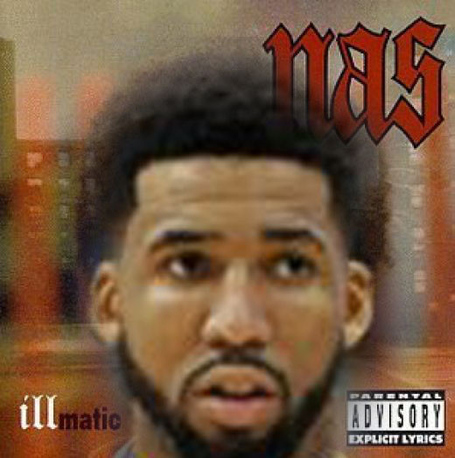 Wilson on his drives resulting in more dunks:

Wilson on his blind alley-oop finish:

"I had no idea where I was at when I jumped," said Chandler.

On leading team in scoring again:

"I've always been a person who loves to play both ends of the court," said Chandler. "When you're playing great defense it's easy on you -- the offensive game."

K2 on his mounting role with team:

"I feel good," said Koufos. "I'm just trying to do little things. We're playing well as a team; that's the most important thing to me right now. We're building up some momentum for the post-season."

K2 on his on-court chemistry with his teammates from the beginning of the season to now:

"I think we're meshing a little more as each game passes," said Koufos. "We had a lot of ups-and-downs at the beginning of the season, but I feel like now we're getting more stable. We're transitioning to become a playoff contending team."

"I still got a lot of things to work on," said Koufos. "But that's the great thing about basketball, there is no such thing as a perfect player."

K2 on how this team is coming together:

"I think we're all improving," said Koufos. "I think we have a unique team because everybody on this team can run. We have a lot of assets, we don't know who is going to be the highest scorer, the leading rebounder - everybody contributes every night."