Denver Stiffs hitting the road for Nuggets at Phoenix Suns

With the snow coming down, it's time to get on the move ... all the way to Phoenix! I (Nate) will be traveling to Phoenix March 10th to March 12th and covering the Nuggets vs. Suns game on March 11th from the Valley of the Sun.

Share All sharing options for: Denver Stiffs hitting the road for Nuggets at Phoenix Suns

If you are in Colorado this weekend - you likely have a little snow near your home. This isn't quite the epic storm that the weather folks were calling for (glad it was more miss than hit); it's definitely not like in 2006 ... when I spent the day shoveling with my mom. The good part - after I got done shoveling, I was able to dive into a few of the drifts! 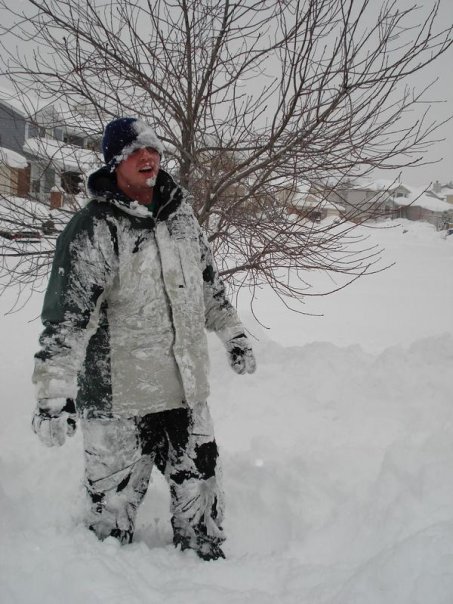 Nonetheless, I'll take an opportunity to head out to Phoenix and get out of the cold weather for a bit. The main reason for my trip? To attend the Nuggets vs. Suns game on March 11th at the U.S. Airways Center. This will be a unique experience for me and one that I hope to share with all of you.

You see, I've never attended an NBA game outside of McNichols Sports Arena or the Pepsi Center. Although, I have attended plenty of awesome events in my 30-years. I can still remember being at McNichols aka "Big Mac" on Feb. 4, 1996 the night the Nuggets defeated the -- eventual 72-10 -- Bulls. I was up in the rafters with by buddy Brett for the duel between Mahmoud Abdul-Rauf (32 points) and Michael Jordan (39 points); the one Rauf won, thus snapping Chicago's 18-game win streak.

That was an awesome game to say, "I was there", but I don't think I've ever been to a sporting event that can equal Game 163 between the San Diego Padres and Colorado Rockies on Oct. 1, 2007. The Padres scored two runs in the top of the 13th inning and all hope for the playoffs felt lost, but -- as we all know -- the Rockies came back to score three in the bottom of the inning to punch a ticket to the post-season (He touched the plate!). I remember shaking my buddy Rich by his shirt/jacket collar and high-fiving my sister Amanda until my hand hurt. 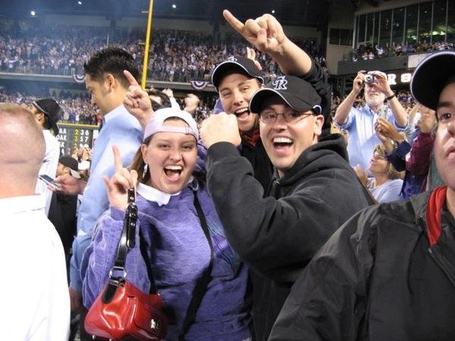 My sister Amanda, my buddy Rich, and a fist-pumping Nate.

My ties to San Diego run deep ... not really, but kind of. As part of a Fantasy Football Draft 2010 trip to San Diego, I did catch a Phillies vs. Padres game at Petco Park. I have no idea who won that game and probably watched a total of 2-3 pitches. Petco does not compare to Coors Field, but it was a pretty nice park on the inside -- I wasn't a big fan of the exterior of the stadium. This was my first MLB game outside of Mile High Stadium and Coors. 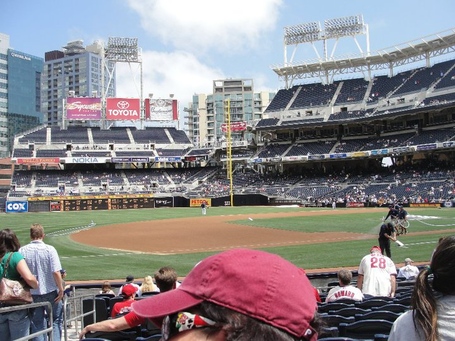 This guy in front of me had killer sunglasses?!?!

It was weird being at a game where I had no rooting interest. I almost wanted to be like the folks you see at The Can who wear a Dirk Nowitzki jersey to a Hornets vs. Nuggets game; I should have worn my Chauncey Billups jersey at Petco.

But rooting at games is what it's all about; like back on April 23, 2011 when I was at Game 3 of Thunder vs. Nuggets -- unfortunately the Nuggets lost 97-94, but my buddy Rory and I did get a chance to boo the bejesus out of Kevin Durant and Russell Westbrook as they left the floor. I even caught a picture of us on my DVR from the broadcast of the game. The best part of that night? My buddy Rory got some good reaction out of James Harden (now of the Rockets) at the half. I can't repeat what my buddy was saying, but Harden sure wasn't a fan ... and neither was the woman sitting next to us. I am not a super rowdy fan when I attend games, but I was full of boo-birds that night. 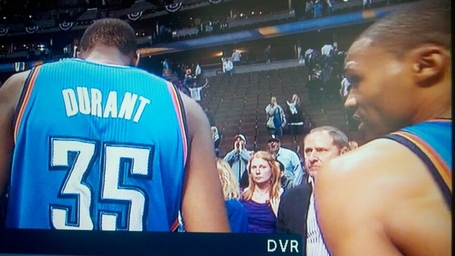 Right above the lady in purple (center) you can see me with my hands cupped booing
and my buddy Rory (black hat) following suit, but no hands needed.

Sometimes booing can come with consequences. When I attended the UFC 135 press conference for MMA Mania.com I had the opportunity to meet Quinton "Rampage" Jackson. I was on my best behavior around these fierce fighters. I even managed to get a picture with Rampage where he looks like his usual badass self and I look, just bad! 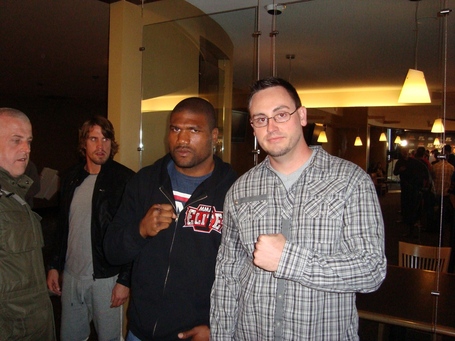 One trained fighter and one doughy writer!

A bit of a newsflash ... I love sports! While in Phoenix I plan to attend a Rockies spring training game as the team will be playing in the area while I'm there. This should give me time to look up who in the heck the player will be this season for the Rox (I have not been doing my homework).

Like I said, I want to document my trip a bit and help pull the Stiffs into the experience. I will be uploading some video along the way to my YouTube channel and hopefully everything I post there will make it here, but it might be there first - so be sure to give it a follow or look in: click here. As usual, I will be Tweeting as well and hopefully I'll get a couple special items up as well.

This will also be my first trip as a media member - so I'm excited to see how things work down in Phoenix and how things compare to Pepsi Center. It will also be cool to attend shoot-around for the Nuggets as it seems teams are a bit more relaxed out on the road. I have noticed more laid back environments with visiting teams coming to Denver - still focused and ready to play, but just a bit of a different vibe.