The Denver Nuggets practiced this morning down at Pepsi Center, but not everyone was in attendance this morning.

Share All sharing options for: Sunday Nuggets: Andre Miller in Utah for Utes, Iguodala enjoys time away from Karl

Yes, the Nuggets had to practice on Super Bowl Sunday, but fortunately they were done today with plenty of time to get where they needed to be to enjoy some football, commercials, food, and whatever else they were up to today.

Upon entering the Pepsi Center practice court this morning - one voice was clearly absent. That of George Karl. The head man for the Nuggets was missing in action and Andre Iguodala let us know that assistants Chad Iske and Melvin Hunt were the main voices.

"It could have been one of those days where Coach is not here and we got a long break between games," said Iguodala. "But we came in and got some good work in."

With Karl gone, I wondered if perhaps Iguodala and his teammates missed not having the head man around and if perhaps they missed their coach.

"It's hard to be a head coach because there is always someone that doesn't like you," said Iguodala with a hint of a smile on his face. "Whether it's a guy who is not playing or it's one of your better players and things aren't going his way. Someone always hates Coach. It was good not to hear his voice and I'm sure it was good for him to be late for a plane."

The dry wit of Iguodala shined through with that quote. However, the Nuggets are not joking about the playoff race out West. Things are starting to bunch up between the top teams and perhaps things could get a little closer for the Nuggets and the "upper echelon" too.

"We don't talk about it that much," Iguodala said. "Our main thing is: how do we improve? How do we get better? The rest is so up-and-down, one game can change two or three seeds."

The Clippers are three games into their current eight game roadtrip - where they are just 1-2 so far with to recent losses to the Raptors and Celtics. In fact, the Clippers are just 2-6 in their last eight games and Chris Paul has missed 10 of the team's past 12 games. Paul isn't expected back any time soon either. Rumors are circling that the Clips might be making a run at Celtics big man Kevin Garnett (Eric Bledsoe and Caron Bulter in a trade? Maybe DeAndre Jordan? - read about it on ClipsNation.com).

Watching the Buffs vs. Utes game yesterday (while waiting for another game to begin) I saw a quick flash on the screen of former Utes players Keith Van Horn and Andre Miller. It took me a moment to realize the game was in Salt Lake at the Jon M. Huntsman Center and that Miller must have flown in-and-out in a hurry.

"It was cool, it was a retirement ceremony for Rick Majerus," said Miller. "They put his sweater up there [in the rafters] for all the years he has put in and worked for the University."

Majerus passed away roughly two months ago at the age of 64. Coach Majerus and coach Karl were very close and Miller was also close with his former collegiate coach. From the Deseret News:

Approximately two dozen former Ute players walked onto the court at halftime and stood while Hill spoke, along with Jodi Majerus, Rick's sister. Among the former players on hand were Keith Van Horn, Michael Doleac, Andre Miller and Josh Grant. Miller, who still plays for the Denver Nuggets and had a game the night before in Denver, flew in late Saturday morning and arrived just in time for the game.

Did Miller happen to notice anything different about his old stomping grounds?

"Not too much, new technology and a new locker room," said Miller. "It was fun [seeing all] the friends and families that support the University. There are people that I keep in contact with a little bit and the guys are getting into their careers after basketball. It was fun to see what those guys are up to."

It's sort of crazy to think that Miller is still in the NBA while his former teammates, like Van Horn and Doleac, are getting into their post hoops lives. But it is Miller who is still playing and playing at a pretty high level still. And Miller's Utes got a very big win over the Buffs in a game where Utah coughed up a big lead, but held on for a win.

"They almost lost it," said Miller. "But it was fun to watch. It was an intense game."

As Chris Dempsey reported on Jan. 31st - Grgurich has been doing some consulting work with the Nuggets on a temporary basis. Today after practice Miller and rookie Evan Fournier put in some extra work with Grg, John Welch, and Patrick Mutombo. 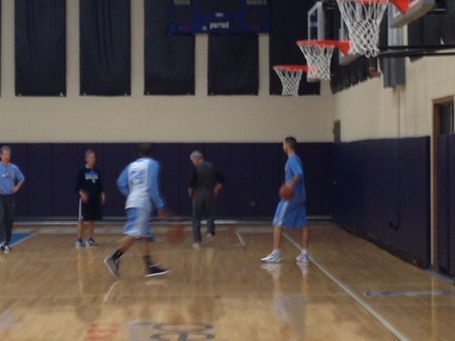 "We were working on point guard stuff," said Miller. "Normal individual pick-and-rolls and jump shots. We were copying each other. I was out there trying to shoot threes with [Fournier] and he was doing pick-and-rolls. Working out together."

It was really cool watching Miller and Fournier working with Grg. The two were working out in the post and coming off the pick-and-roll. Miller is pretty humble, but you could see the copy-cat that the coaches wanted Fournier duplicating of 'Dre, but with his own twist. You can't really copy Miller's game and you definitely can't copy his shot. Evan has a beautiful stroke and can finish well above the rim where Miller was using a finger roll inside, but it sure was fun watching the two working on their game and going through different scenarios from different spots on the floor.

The work that Evan can put in with Grg is invaluable. The former Nuggets assistant runs a point guard camp in Las Vegas in the off-season (I'm not sure if he still does that) that J.R. Smith used to attend, along with many other NBA players. He's an NBA lifer and a gym-rat in the best sense and the more time Fournier can spend with him, the better. And it was also really cool to see Miller working on his game and being an example for Fours to follow.