As the Nuggets get ready for the final push to the 2012-13 regular season, it's time to look at Denver's big men.

The Nuggets are going to enter the post-season with a very young group of big men. Their evaluation and progression is often discussed here on Denver Stiffs. This got me wondering how the big guys have been doing as this campaign has been wearing on.

Let's take a look at how Kosta Koufos, JaVale McGee and Kenneth Faried have been doing on a month-to-month basis this season: 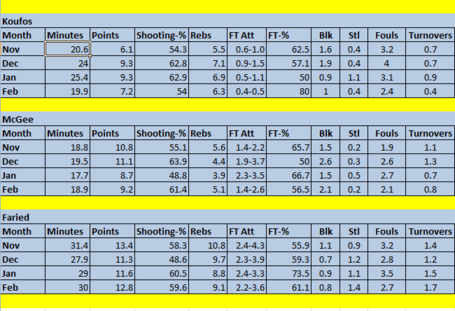 Some things that jump out to me from the above ...

1.) Faried has earned Karl's trust and his minutes reflect that. The Manimal gets the most consistent minutes of the big men and often is on the floor to close out games at the center spot in Koufos' and/or McGee's place.

2.) Koufos and McGee have been playing very equal minutes in Feb. and McGee is getting some nice production. The minutes gap seems to be closing. Karl has previously said he wants McGee to be a 20-25 minute player this season and while he's not getting more minutes yet, Koufos is seeing his minutes come down a touch.

3.) Koufos has that 80% free throw percentage in Feb., but he's just 4-5 in the month compared to McGee who is 13-23 from the charity stripe this month. It is interesting how many foul shots McGee gets and that could be that the book on him is to send him to the line and it could be that McGee is attacking the rim more than Koufos. K2 just does not get to the foul line like Faried and McGee do.

4.) For the minutes played, Koufos and McGee don't have as wide of a rebounding gap as I first thought. Playing alongside Faried -- for Koufos -- can lead to fewer rebounds, but so long as Koufos isn't giving up boards, the Nuggets are okay. I am not too concerned with rebounding numbers. Would I like to see both Koufos and McGee get more boards? Yes, but again not putting up big numbers and allowing the opposition to get boards are two different things. If Koufos and McGee box out and don't allow offensive boards, who cares who grabs the boards for the Nuggets? I don't.

5.) The shooting percentages between all three guys is pretty equal. None of these guys do much work outside the paint, so all should shoot over 50% from the floor.

6.) The turnover and foul numbers are also pretty equal across the board -- that could be a sign of the youth of the young bigs. The foul numbers could improve as the guys learn to play better defense and the turnover numbers come down a bit with on-court chemistry. Of the three, JaVale and Kenneth do the most work off the dribble and their numbers are decent in the turnover department -- they are not killing the team.

What do you see from the Nuggets big men?