Nuggets at Grizzlies preview: Two teams who are singing the blues

Both the Memphis Grizzlies and the Denver Nuggets reached franchise records of win totals last season. Looks like neither team will reach that mark this season.

Share All sharing options for: Nuggets at Grizzlies preview: Two teams who are singing the blues 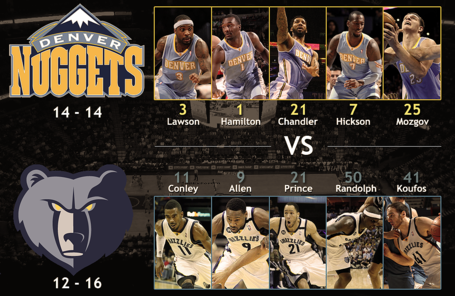 The Memphis Grizzlies won 56 games last season. The Denver Nuggets won 57. Both franchise records. The Nuggets were knocked out in the first round, the Grizzlies advanced to the Western Conference Finals, only to lose to the San Antonio Spurs.

Neither team is likely to duplicate that feat this year, or for the foreseeable future.

The Grizzlies let go Lionel Hollins over a titanic philosophical dispute over analytics and the use of Ed Davis (seriously). The Nuggets let George Karl go because they wanted to win "playoff basketball". The Grizzlies hired assistant coach Dave Joerger as new head coach, and the Nuggets went with Brian Shaw. This have been remarkably different with each team this season. Joerger wanted to change the way the Grizzlies play, turns out he didn't have the personnel for that sort of thing so he adjusted accordingly.

You can't remove injuries from the analysis of each team, and the Grizzlies suffered a titanic one when Marc Gasol went down 13 games into the season. If someone of that kind of talent is out of your lineup it is going to have an enormous impact. With the Grizzlies anchor in the middle gone, it's been left to Kosta Koufos to hold down the fort. We are all aware of Koufos' abilities here in Denver, and so far he is having a very Koufos-esque year. Not much to say more than that.

Meanwhile Zach Randolph is aging, while still managing to grab 10 rebounds a game. Since Randolph's game is fairly basic, doesn't involve flying up and down the floor, so his durability despite being so old he no longer leaves fingerprints is impressive. Memphis still seems to have that Memphis "look" without playing like Memphis. How much of that is the lack of Lionel Hollins?

I like Mike Conley. I think he's the type of point guard/tough mentality player the Nuggets so desperately need. He is the kind of point guard you can build a team around, and if that is what the Grizzlies are trying to do then more power to them. Conley leads the Grizzlies in scoring, and with Gasol out he seems to be their unquestioned leader.

One last thing I will say about Ed Davis. I think what Tim Connelly said on the CSG Podcast interview with him about certain analytics does apply to Davis in this sense - Analytics can tell you what someone does well on the court, but it can't tell you why a player sits on the bench. There's likely good reasons for both.

The Nuggets are averaging 14 points per game less than they did when they were winning games. The offense is in shambles, and while injuries have contributed to the team's woes of late ... you can say this problem is the classic case of "square peg, round hole". Nuggets, even with "pace" are running a system of offense that is pattently ill suited for the players that are currently here. While the defense has improved, the Nuggets are so bad at offense it makes little difference. Now they can't shoot from anywhere on the floor. Randy Foye has been so bad, he played 10 minutes against the Golden State Warriors, lost his starting job, then played a grand total of 7 minutes off the bench against the Pelicans while contributing nothing.

Mike Olson had that stat about ppg in his last preview, and I'm keeping it up there. The Nuggets offense is atrocious and it's hard to see how they can get out of this particular slump. A team that is made for fast breaking transition, full court offense, is not geared for tough it out, grinding, basketball that Indiana plays. This roster will have big changes happening, you can bet on it. It's just a question of when at this point. The Nuggets have lost 5 in a row and have looked terrible for 4 of the 5. One hopes this streak the team is on isn't part of the classic death spiral we have seen so many teams go through.

As for now. Play the young guys and go all in with development. What do you have to lose?

Join your fellow Stiffs at Jake's Food & Spirits as the Nuggets take on the Grizzlies in Memphis at 6pm. As part of the festivities we'll be giving out an autographed Ty Lawson jersey. Be sure to RSVP here or on our Facebook event page.