The big Nuggets issue nobody is talking about

During the recent Nuggets struggles a significant issue has gone under the radar with most observers that may be key to Denver regaining success.

Share All sharing options for: The big Nuggets issue nobody is talking about

During the recent losses by the Nuggets it has been observed that the main issues seem to be on the offensive rather than the defensive side of the ball. While the defense has continued in a similar vein, the offense has recently taken a turn for the worse. This can be seen in the following chart which plots the Offensive and Defensive Ratings from each game so far. A 5 game moving average trend line helps demonstrate the recent offensive struggles (the blue line). 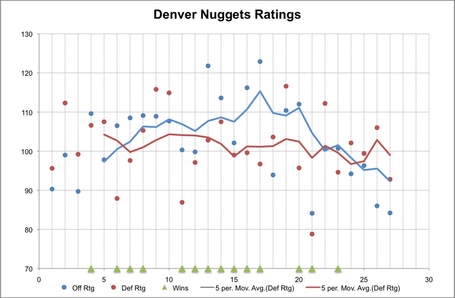 Denver Stiffs has also seen lots of discussion about struggles with the tempo of the offense and the play of Ty Lawson since his return from injury, but there is one factor that may be bigger than any other in the Nuggets current woes. Consider the following:

In December the Nuggets have shot 30.2% from the 3pt line, ranked 30th in the NBA

Thats right in the 30 team NBA no team is shooting worse than the Nuggets from beyond the 3 point line during December. Looking at the game by game 3pt percentage of the Nuggets in the chart below, a clear downward trend during the month of December can be observed. For a team that relies on the 3 pointer much more than in recent years this is a disturbing trend that may be the main driver behind the similar downward trend in Offensive Rating. 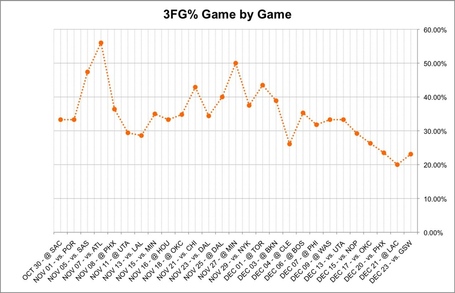 Looking at some grouped 3 point statistics some further observations can be made:

Drilling into the December slump

Further insight can also be gained in looking closer at this trend by breaking it down by location and players to learn more about this significant problem.

The chart below shows a breakdown by location of the Nuggets 3pt shooting during December: 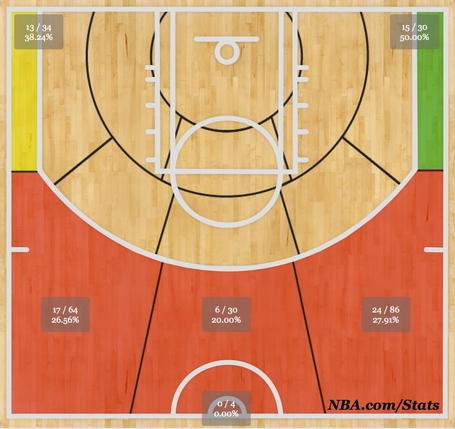 As can be quickly seen the Nuggets are shooting well from the corners. The right corner sits at 50% while the left corner is a respectable 38.24% (the yellow indicating a % 'comparable' to the league average). Above the break however the results are not so good. Overall above the break Denver has shot 47/180 at 26.1% including shooting only 20% from straight on.

The following table shows the results for the Nuggets players who have shot 3 pointers in December: 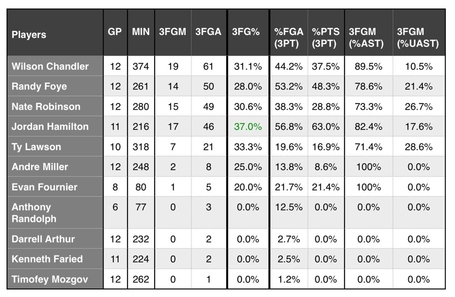 Volume wise there are four players with over 40 attempts, Lawson with just over 20, and six other players with single figure attempts. Wilson Chandler leads the team with 61 attempts in December and as might be expected noted 3pt shooters Jordan Hamilton and Randy Foye shoot the highest proportion of their field goal attempts from 3 point range (both being over 50%).

The most alarming observation from this breakdown is the fact that many players seem to be struggling. Only Jordan Hamilton at 37.0% (and perhaps Lawson at 33.3%) is shooting a decent 3pt%.

The numbers suggest a large part of the recent Offensive struggles can be traced to the 3 point line and specifically the area above the break. Unfortunately the stats reveal a number of players are all struggling at the same time and the offense of the Nuggets has suffered as a result. The only positive from this may be that all these players seem unlikely to continue to struggle together like this, and if a few more players can join Jordan Hamilton and begin to hit a good percentage from the 3 point line the Nuggets may be able to break out of their current offensive slump.