Warriors vs. Nuggets preview: Andre Iguodala to face the music

The homecoming Nuggets fans never asked for happens Monday night when former Nugget Andre Iguodala and the Golden State Warriors invade the Pepsi Center for the first time since a heartbreaking 2013 playoff series.

Share All sharing options for: Warriors vs. Nuggets preview: Andre Iguodala to face the music 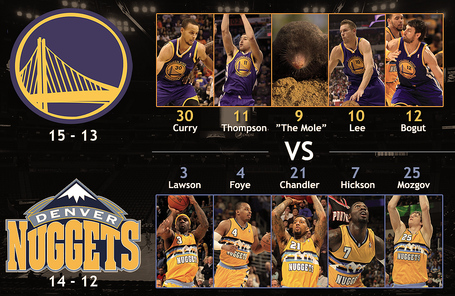 When the Denver Nuggets traded for the talented swingman Andre Iguodala in August of 2012, it was an admitted gamble. Not only were the Nuggets giving up a talented swingman of their own in Arron Afflalo, but Afflalo was under contract for years to come while Iguodala was an unrestricted free agent to be were he to exercise his player option (which of course everyone knew he would do). Moreover, the Nuggets would also be parting with a 2014 first round pick to acquire Iguodala.

On a (very) temporary basis, one could argue that the Iguodala experiment worked. Long sought after by former Nuggets head coach George Karl, Iguodala gave Karl the "shutdown swingman" that the old school coach yearned for since Dahntay Jones manned the position during the 2008-09 season. And with Karl coaching Iguodala, the two helped put together a 57-win season ... the best in the Nuggets' NBA franchise history.

But as we know all too well here in Denver, the Karl/Iguodala combo couldn't get it done in the 2013 post-season despite landing a third overall seed and playing a 47-win, inexperienced Golden State Warriors squad that the Nuggets had beaten three times in four tries during the 2012-13 season.

Not only was that playoff series a colossal disappointment for the Nuggets organization and it's fan base, but it was just ... well ... weird.

For starters, the Nuggets should have been swept. Were it not for a fluky Andre Miller game-winner in Game 1, the Nuggets very well might have been swept. Secondly, the Warriors were able to beat the Nuggets by playing their own game (Games 2 through 4 - all Warriors wins - were scoring duels) and also by slowing the Nuggets down (as evident in Games 1 and 6's low-scoring affairs). And finally, after the Nuggets Game 5 victory, Warriors head coach Mark Jackson called the Nuggets out for being dirty and alluded to the Nuggets players themselves admitting to Jackson that dirty play was being called for. What was thought to be simple playoff mind games at the time has since become a full blown conspiracy theory here in Denver ... all but confirmed by Iguodala signing with the Warriors as a free agent this past summer in what might very well have been the most cruel act by a former Nugget since Carmelo Anthony demanded to be traded in 2011.

Not only did Iguodala sign with a team that had ZERO need at the swingman position, but he signed with Golden State for less than Denver was offering. Both acts prompted some serious head scratching around the Mile High City. Unless, of course, the fix was in for Iguodala to become a Warrior going back to last spring (a theory promoted by my esteemed colleague Jeff Morton for months).

Since Iguodala signed with the Warriors (which prompted a sign-and-trade that brought Randy Foye to Denver by way of Utah), my colleague Jeff and others around here have been referring to Iguodala as "the mole." In fact, Jeff's cause celebre picked up so much steam that Denver reporter Dave Krieger flat out asked Karl about the issue in a late November interview:

Krieger: Do you think Andre Iguodala was Mark Jackson’s "mole"?

So at long last - and months after collectively stabbing the Nuggets and their fans in the back - Iguodala must come back to Denver to face the music, so to speak. And with Iguodala comes a Warriors team that to date has wilted under the pressure of the high pre-season expectations bestowed upon them. As noted above, the Warriors are just 4-7 in games decided by 4 points or less, they've lost 3 of their last 5 games and are battling with our own Nuggets for the Western Conference's final playoff spot.

But that doesn't change the fact that, when healthy, the Warriors possess a potent lineup. When Iguodala starts alongside Stephen Curry, Klay Thompson, David Lee and Andrew Bogut the Warriors are 10-3.

Three things to look for in this game ...

2) Stephen Curry versus Ty Lawson ...
Just when you thought Lawson might be an All-Star, check out what Curry is doing this season: second overall in assists, third in three-pointers made and fifth in scoring. Now that, my friends, are All-Star numbers.

3) Keep Andrew Bogut off the boards ...
The Warriors center hasn't had a sub-10 rebound game since December 7th and has grabbed double-digit rebounds in 15 of 18 games played this season.

-Stephen Curry: The aforementioned Curry killed the Nuggets in the 2013 post-season and is killing all of his opponents this season. The Nuggets might need to put the rangier Randy Foye on Curry if they hope to contain him.

-Klay Thompson: Thompson is connecting on 43% of his three-pointers and is making 3 three's per game. The Nuggets cannot fall asleep on the perimeter.

-David Lee: The Warriors All-Star power forward is quietly having another solid season with 17.8 ppg and 9.9 rpg.

-Andre Iguodala: Do Nuggets fans really need a reason as to why Iguodala is on the Stiff List here?

-Harrison Barnes: Barnes' coming out party during the 2013 playoffs was rewarded by the Warriors signing a player in Iguodala who plays his exact same position.

The Nuggets need to beat a real team other than the Mavericks and Timberwolves, and the Warriors at full strength provide the perfect opportunity to do so.

Join your fellow Stiffs at Jake's Food & Spirits as the Nuggets take on the Grizzlies in Memphis at 6pm. As part of the festivities we'll be giving out an autographed Ty Lawson jersey. Be sure to RSVP here or on our Facebook event page.