It shouldn't have been this close, but the Nuggets managed to squeak out a big win at home over the Dallas Mavericks 102-100

Share All sharing options for: Mavericks vs Nuggets recap: Nugs survive bad second half to beat Mavs in nail-biter

At the end of the first quarter of the Nuggets nail-biting 102-100 victory over the Dallas Mavericks, Adam Kinney from Denver Sports Nation on Mile High Sports nudged me and pointed at the score board. On that scoreboard there was what we thought was a funny mistake. Nuggets was spelled with a "c" at the end and really thoughts someone just had a bad spelling day

Naturally we considered this to be a little innocuous thing and I of course took a picture of it. However, later in the game the scoreboard problems continued, and we began to think that maybe this issue was a bit more serious. 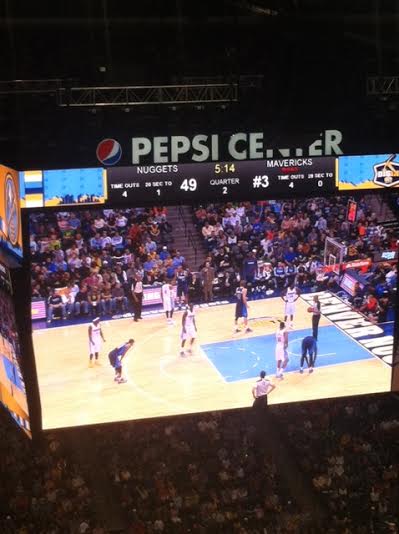 At several points during the second half there was no scoreboard indications at all, and the Nuggets PA announcer had to keep score for the arena. I bring this up for one reason. The multiple stops and starts that occurred in the second half, primarily due to the scoreboard issues at the Can likely affected the Nuggets already waning attention on the game. It seemed that the Nuggets, who played a pretty awesome first half were awkward and stilted in the second. Throwing up bad three point shots and turning the ball over at an incredible rate (particularly Ty Lawson). It was a bizarre game.

Ty Lawson and Kenneth Faried stood out stats wise in the game. Ty finished the game with 20 points and 9 assists while Faried put in a high-flying 18 points and 14 rebounds. Without the contributions from these two, it's likely that the Nuggets don't come out of Pepsi Center with a win.

Nuggets three point shooting in the first half was quite good until the Mavericks, let by Dirk Nowitzki and Monta Ellis started charging back into the game. However, up until that point Randy Foye (5 three pointers, finished with 17 points total) and the gang were 8-16 on three point shots, which is good for any team in the NBA. The team was on a roll, and quite frankly was playing some pretty crisp offense.

Nuggets inability to break the zone. Yeah, what's with that? The Mavericks (as they do) fell into a zone defense and forced the Nuggets to take outside shots. This, in turn, caused the team to jack up some ill-advised three point shots. Well, more than ill advised. Keep in mind the Nuggets were 8-16 on threes in the first half. By the time the game was over they finished with an 11-32 tally on three point shots. So do the math. After the game, coach Brian Shaw said the team went "3 point crazy", and that's about the most apt description I could find.

Weird, weird game. After the Nuggets went up by 17 in the second quarter, they just kind of started jacking up three point shots and stopped doing the things that got them to that lead in the first place. Yes, the Mavericks went into a zone defense, but it's not like the Nuggets haven't faced that kind of defense from the Mavs before. It's what they do against the Nuggets. So the team went into jack up shots mode and it nearly cost them the game.

The Nuggets won, and they did it by coming up with some huge defensive stops at the end of the game. However, this really was a game the Nuggets should have been coasting to victory in ... considering the Mavs were on the second night of a back to back. This team is young and still learning, hopefully this game was a bit of a wake up call and will teach the Nuggets to be prepared for anything.

Despite the weirdness of the scoreboard issues, the team has now fought all the way back to 6-6 on the year and have won 5 in a row at home. Back out on the road they go, and will be seeing this very same Mavericks team in Dallas on Monday. Hopefully the Nuggets learned a thing or two from this game.