A look at Wilson Chandler's skill set with use of some video sequences to help illustrate how he has been valuable to Denver this season.

Since returning from injury Wilson Chandler has made a significant impact for the Nuggets despite being on restricted minutes. With the lack of depth at the wing position, Chandler's ability to score by driving as well as hitting the three has already proved an asset. Apart from his scoring ability Chandler also has a number of other important skills that make him a valuable player. As can be seen below so far Wilson has been able to contribute in categories such as rebounds, assists, steals (and even blocks against OKC) while so far only committing 1 turnover.

He also contributes in ways that don't show up as easily in the stats:

Spacing: Since coming to Denver Chandler has improved his shot selection. As can be seen in the graphic above (which I prepared last year after reading this Ray Martinelli post on Stiffs) Wilson's shot selection improved significantly last season, and most shots were taken either from the three-point line or in the paint. Positively Chandler's shot selection so far this season looks like a continuation of last season despite playing in a different offense. 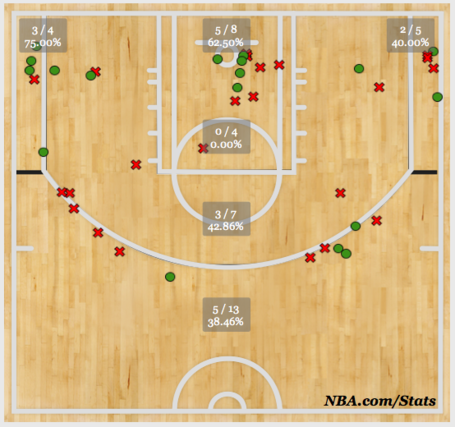 Chandler having both a good three-point shot and good driving ability helps Denver's spacing in the half court significantly. He is most often positioned along the three-point line, which aids the spacing of the offense as his defender can't cheat in towards the middle too far to clog the paint. If they do, then he is a real threat to be found open to shoot a three or to drive past the defender if they close too fast trying to get back to him and defend the three.

Defense: Another advantage having Wilson in the lineup is the fact he is a tough and versatile defender who is able to defend both bigger or smaller players. This versatility allows Brian Shaw more options for in-game lineups whether he wants to go big or small, as Chandler can defend such a wide range of players competently. So far this season, Chandler has mostly defended wing players, but has spent some time matched up against power forwards when Denver has gone small.

Recently George Karl (in his role as an NBA analyst on ESPN) discussed the importance of the return of Chandler:

It's amazing to me as a coach how one player can come back and put a puzzle together very quickly.

He can drive the basketball, he can play defense, he can make the corner three, and he knows how to play with the guys. I think there's a comfort zone that has come to the Denver Nuggets because of his presence on the court.

To illustrate some of the points made above and demonstrate how his skill set and versatility aids the Nuggets on court; instead of single isolated plays I edited three sequences from the Nuggets vs. Timberwolves game showing how Chandler finds multiple ways to contribute through a number of plays to help the Nuggets 'click'.

In the first sequence Chandler scores on a play which illustrates his offensive spacing, driving ability, and three-point corner shooting. He then displays great court vision and hustle to steal Kevin Love's long outlet pass to Corey Brewer which leads to more Denver points as Ty Lawson hits a tough shot.

The second sequence begins on defense. Wilson does a good job of cutting off the driving lane of J.J. Barea and still get back to cover his man (Robbie Hummel). He offers light help in the post on Nikola Pekovic and grabs the defensive rebound off the miss. He then dribbles down court and drives, which collapses the Timberwolves defense, and allows Chandler to find Darrell Arthur with the pass for an open shot. Arthur misses the jumper but Nate Robinson grabs the offensive rebound and finds Chandler for the three.

During this sequence Chandler earns two assists and a score. The first assist is a nice entry pass to Evan Fournier who finishes inside. After Evan gets a sharp steal on the defensive end, Chandler leads the break and passes to Timofey Mosgov for a second assist. Then after Dante Cunningham is able to score from a T-Wolves offensive rebound Chandler quickly answers back with a great drive and slam in traffic at the other end.

It's good to have Chandler back, for more reasons than one ... as you can see above.