This post details an interesting play that has appeared in multiple games that you may want to keep a lookout for in future games.

One of the new additions to the Nuggets roster in the offseason was shooting guard Randy Foye. During a number of the early season games the Nuggets have run sets through Foye out on the wing. While Foye is known primarily as an outside shooter he has a good lob pass, and one of the play options run through Foye has been a backdoor lob play which uses a point guard screen in the paint.

While there hasn't been much influence of the triangle seen yet in the Nuggets play the general spacing employed in this play is actually triangle spacing; with Foye at the wing, one player in the corner, and one at the high post on the strong side forming the triangle, with a 'two man game' happening on the weakside. 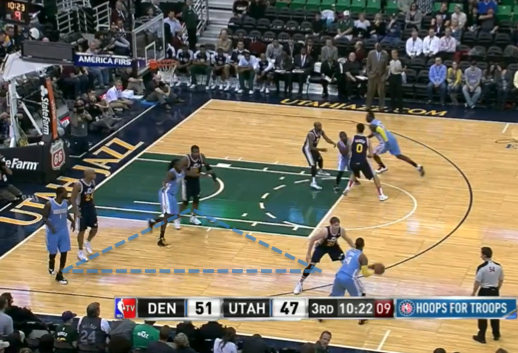 The Play in Pictures

The play begins with Foye receiving the ball on the wing. The point guard (here Ty Lawson) then runs down through the paint before turning back toward the weakside elbow.

At the weakside elbow the point guard sets a screen on the defender of the big man who cuts quickly to the basket to receive a lob from Foye.

Foye throws the lob and Hickson is able to finish at the rim.

The video breakdown below shows two further examples of the play from the recent San Antonio game. The point guard in both of the video plays is Nate Robinson and in these plays you can see Robinson also sets a brush screen going into the paint on the defender of the big man cutting to the strong side (which wasn't possible in the above play example).

Catching the lob in the first play Kenneth Faried is able to finish the play over a smaller defender, while in the second play JaVale McGee gets knocked on the cut to the hoop and it throws off the timing and he ends up fumbling the pass (and somehow kicks the ball backwards).

This play has worked on a number of occasions as the defender is often surprised by the screen by the point guard coming from behind, and even if the defenders switch quickly on the play the cutting big man usually still has a good height advantage going for the lob, so this is a play the Nuggets are likely to continue to use in the half court this season so keep an eye out for it.