We won't know a ton about the Nuggets until the regular season begins, but we do know a few guys that new coach Brian Shaw is looking to for breakout seasons.

Every season the SB Nation hoops blogger family brings you previews of our respective teams. We'll be posting links to them all here, be sure to read them and study up on what happened around the league this summer.

1. What Significant Moves were made during the off-season? 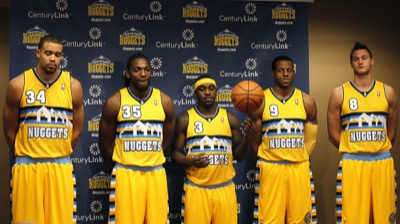 Besides remaking the entire front office, the scouting department, the coaching staff, and some key roster moves ... not many. The biggest change will be Brian Shaw taking over for George Karl. We've already seen a different offense in one pre-season game (vs the Lakers) - one that looks more traditional in feeding the ball into the post and taking shots from all over the floor versus layups and three-pointers. We're still waiting to see what lineups and what kind of defense Shaw can build.

With Andre Iguodala moving on to the Warriors, there is a hole at the shooting guard spot for Denver that looks to be plugged using a combination of Foye, Evan Fournier, Jordan Hamilton, Nate Robinson, Andre Miller, Ty Lawson, and perhaps Wilson Chandler (once he starts playing, strained hamstring). The power forward spot also looks to be up for grabs between Kenneth Faried, J.J. Hickson, and Darrell Arthur. JaVale McGee is the man in the middle and will take on a much more significant role in the Nuggets offense and he also must anchor the defense and become a dominant rebounder; tall tasks.

Shaw is still emphasizing pushing the ball in transition, but also wants a more controlled offense that is more than capable of playing in the halfcourt. It's going to be an interesting season in Denver.

2. What are the team's biggest strengths?

The Nuggets will be good, and at home, when they are pushing the ball in transition. With so many athletes on the team, there should be plenty of spectacular plays this season. The team should be one of the top rebounding units in the league with the addition of Hickson and Arthur, but McGee must improve in that area for it to be true. The Nuggets bench, however it shakes out, should be pretty good with Nate Robinson anchoring the scoring of the second unit. It's hard to tell what other strengths will be there for Denver with so much still undetermined.

3. What are the team's biggest weaknesses?

More: All of SB Nation's NBA previews to date

Depth is a strength, but also a weakness. Denver is pretty thin in the experience department at the small forward position. Having Danilo Gallinari out is a bigger deal than some folks think. He is such a tremendous play maker, scorer, rebounder, and defender that he leaves a big hole in his absence. Chandler will do well filling in for Gallo, but behind him it gets a little cloudy. Quincy Miller and Jordan Hamilton have not played significant NBA minutes and are both still trying to get their feet under them. Arthur may play some small forward, but he's a natural power forward that may have some defensive issues dealing with quicker guys.

The team also has a logjam at the point guard spot and that could make for some unhappiness. How will Shaw deal with three guys that like to play big minutes in Lawson, Robinson, and Andre Miller? Are the Nuggets big enough at the guard spots to defend well? Who will win the PF job and will the backup be happy? So many questions with this team ...

The biggest question though is the defense. About the only player on the roster that is known for his defensive abilities is Chandler. Can Shaw's system and player development right the ship with some pretty outstanding athletes? There is no question that Faried, Hickson, and McGee are some of the most gifted players in the league, but they all have question marks on the defensive end. The assumption is that the offense will be able to score (new system may take time), but how will the team defend ...

4. What are the goals for this team?

Make the playoffs. So far we've heard that the team wants to get into the post-season and then see what happens. Well, if history tells us anything, it's that lower seeded playoff teams rarely defeat higher seeded ones. If the Nuggets want to make some playoff noise, they better wind up with a good seed. That only happens if they can mirror some of the success they had last season. That will be a tough order in an improved and already good Western Conference.

The bar for this team should be a 50 win season. That may feel high for some folks, but the talent is there and the coaching is there. We'll see if the team can get to that mark.

5. Why is JaVale McGee taking on such an increased role?

Under Karl, McGee was not given anything - he only started five of his 99 games in a Nuggets uniform during the regular season. Karl often would voice his concern of McGee was not joining Timofey Mozgov and Kosta Koufos working on their games before and after practice and before games. Karl wanted his players to earn playing time by showing improvement on the practice court. There was some type of disconnect between player and coach. But McGee was brought to Denver by Masai Ujiri and Josh Kroenke for a reason. Only Kroenke remains, as does the plan for McGee.

Sink or swim, McGee's fate will be realized this season. McGee has been staying late after practice ends to work on his free throw shooting (and more) and the way he speaks about his new coach, often using the word "positive" in association with Shaw, shows a new focus. Yes, McGee will be entering his sixth NBA season, but the 25 year-old is taking steps in the right direction.

Even with McGee starting and having some of the offense ran through him, this should still be Lawson's team and having Chandler with an increased role will hopefully take some of the burden off the offense too. It'll be rough sailing without Gallo, but a good team should be able to weather the storm.

This is shaping up to be the most interesting Nuggets season since Carmelo Anthony was a rookie in Denver.

Check out these NBA team previews:

Index of all SBNation Previews