As was reported earlier today by the Nuggets Twitter account, Kenneth Faried is ill and a game-time decision for tonight's contest. He was not at shootaround when the media was let in ... we'll have a status update closer to game time.

Share All sharing options for: Nate's notes from shootaround: Jazz vs. Nuggets

The Nuggets were all business today at shootaround. The Harlem Globetrotters were preparing for their afternoon game on the main floor at Pepsi Center and the Utah Jazz did not have a formal shootaround today as they played in Phoenix last night (and won 87-80) - so George Karl was able to take up as much time as the team needed.

When the media was let in Karl was working one group of players implementing some new items for the offense and defense. After a few minutes the team switched things up and Karl began working (along with Chad Iske) with another group of players - Andre Miller, Evan Fournier, Corey Brewer, Timofey Mozgov, and JaVale McGee.

I noticed some comments in the game-thread about folks wanting to see Karl more involved with the team. Well, he was out there in the thick of things today, as usual, and giving instruction and having guys run things with lots of repetition. 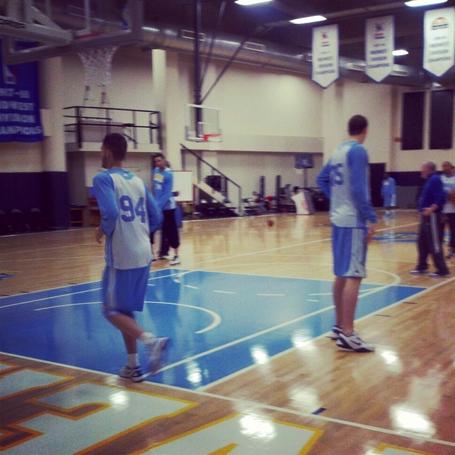 Fournier, McGee, Mozgov, and Karl running through some plays.

George Karl, "I'm not sure they are very happy being around me. My reaction [after the Timberwolves game] was not very good. We [are] almost 35-40 games in and we haven't had many of those performances. In general I know you can't have 82 polished performances; no one does it. Look at Miami right now, they are struggling to win games [the Heat lost last night to the Bulls]. This is an incredibly difficult stage to be successful on and when you have momentum and confidence going and you throw it away because you don't come with the right effort and the right intensity ... it has to be confronted and it has to be talked about."

Seven of the next 10 games are against the Western Conference:

On facing Utah for the third time:

Karl, "They are a good basketball team, as is Minnesota. You are never given a game. I think that's the biggest disappointment in the game against Minnesota; we acted like they were going to give us the game. The urgency finally got there, it looked like we had a chance to take control ... sometimes the karma of the game."

On what Utah wants to do on offense:

Karl, "I still think their transition and their rebounding are more important than their post up. But they are going to play from the inside out. They are going to try to score around the basket; probably more-so than ninety percent of the teams in the league. I love their young kids [Enes Kanter and Derrick Favors] - they have four big guys who can give you problems and can give you a quarter of tough basketball and most of its on the low block or in the paint."

For the Jazz view - check out SLC Dunk.