Down on the farm: Checking in on Quincy Miller, Iowa Energy

This is the first season in which the Nuggets and Iowa Energy have been working together as Denver's farm team. The Energy also act as the farm team for the Chicago Bulls, Washington Wizards, and New Orleans Hornets.

Share All sharing options for: Down on the farm: Checking in on Quincy Miller, Iowa Energy

Quincy Miller is on his second stint with the Iowa Energy. He was briefly recalled by the Nuggets on Dec. 2nd and appeared in his first NBA game on Dec. 16th in Sacramento when the Nuggets blew out the Kings 122-97.

When the Nuggets returned to Denver for their Dec. 18th game against the Spurs, I was able to catch up with Miller about his time in Iowa and his first NBA action (where he got his first NBA point at the free throw line).

"I got to do what I do best [with the Energy]," said Miller. "Score a few points, show that I can rebound, hit a few assists, and show that I'm very versatile."

In the three games that Miller played with the Energy in his first stint, he averaged 14 points, 10.6 rebounds, and 2.3 assists in 29 minutes per game.

Miller tore his ACL during his his senior high school season, played one year at Baylor, and is now an NBA player. That's three pretty big leaps in a short span and Miller can see his own growth.

"I feel like I'm a different player." said Miller.

A different player that has been working with various coaching staffs on what he needs to do to become a key contributor in the league. Miller said when he's with the Nuggets that he watches film with Melvin Hunt and John Welch and enjoys working with Steve Hess to improve his strength and can already see and feel the changes that his body is undergoing.

One thing Miller doesn't lack is confidence in his game - a key quality in all athletes. One would think that going from being a freshman at Baylor to being guarded by Andre Iguodala in practice might be a little intimidating.

"I am not scared to go against [Iguodala]," said Miller. "But at the same time he's a great player. I'm a competitor."

Before Miller went back to Iowa he felt like he was really starting to understand the offensive concept ran by George Karl and he was really excited about the progress he was making on the defensive end. Miller has had to adjust from playing in games to watching games, but at just 20 years-old he has time to grow into a role on the next level.

Miller has been back with the Energy since Dec. 28th. The team has been struggling and adjusting to a roster that is constantly in flux. New faces, like former New Jersey Nets player Josh Boone, have been coming-and-going and that can make gelling as a team difficult.

The Energy are in last place in the Central Division with a 6-18 record and they are currently on a seven game losing streak.

Quincy had been enjoying a big role on the team. Since his return he played 20+ minutes for his first eight games and turned in his best game against the Los Angeles D-Fenders in a 105-102 win on Dec. 29th. In that game Quincy scored 19 points on 7-12 shooting (2-2 from deep), grabbed 9 rebounds, and recorded 2 blocks.

Then for a three-game stretch from Jan. 18th to Jan. 22nd Miller saw a dip in his minutes. In those three games he only played 12, 9, and 8 minutes and shot a combined 3-11 from the floor. Former Energy coach Kevin Young (who has since been replaced by Bruce Wilson) told me that the team was searching for some different combinations and they were incorporating some new faces as well.

Since Wilson took over, Miller has seen his minutes go back up and he has started the last two games (part of that could be that Boone is now out with a season ending injury). In his last two starts, Miller has scored 13 points in each game and played at least 30 minutes per night. 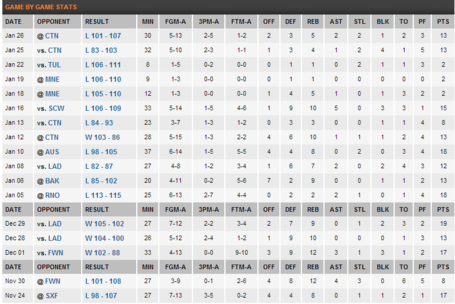