Nuggets assistant coach Chad Iske assists with the scouting of upcoming opponents, game planning, and much more on George Karl's staff. I caught up with Iske on Jan. 24th to talk specifically about the Nuggets defense.

Nate Timmons: What did we see from the Nuggets defense against the Rockets? How do you go about defending against someone like James Harden?

Chad Iske: James Harden is such a big part of their team. Our terminology is plugging the ball; we want to guard him with more than one guy. We wanted him to see a wall of guys. So, in the pick-and-roll the two guys that were in that were going to be in it and then the next closest guy. We really wanted to build a wall with the third guy; so that he didn't have any gaps to get into the paint.

He's third in the league, for guards, on scoring in the paint and he leads the league in free throw attempts and is second in makes. Really our main key was trying to put a wall of defenders in front of him, so that he couldn't get paint penetration because it's such a big part of their offense with him getting to the free line.

Did you guys try to do something different against Harden this time versus the first time you played the Rockets?

Iske: For the most part the philosophy is the same; it's really something we want to do every night against everybody. Keep them out of the paint and be in good plug positions. Not let guys see driving lanes and driving gaps to the basket. You definitely emphasize it when you're playing somebody as talented as Harden.

What's the process like of implementing new defensive schemes from game-to-game? One night you prepare for Harden and the next it's DeMarcus Cousins ...

Iske: We have got a younger team, so more-so than with teams in the past, a lot of our principles are going to stay true every night. Sometimes it's better for us to stay with what we do as opposed to changing it up and getting guys doing stuff that they are not used to.

In the past, when we've had older teams, we can change up a little bit and mix things up more frequently because the players were so used to guarding stuff in different ways. Right now, we're still kind of in this stage of getting all our principles down exactly the way they need to be and sticking to what we need to do.

Timmons' notes: We do see the Nuggets with a lot of similar looks against a variety of teams. Although, we have seen the Nuggets switch things up quite a bit on pick-and-roll coverage from game-to-game and Iske touches on that next ... 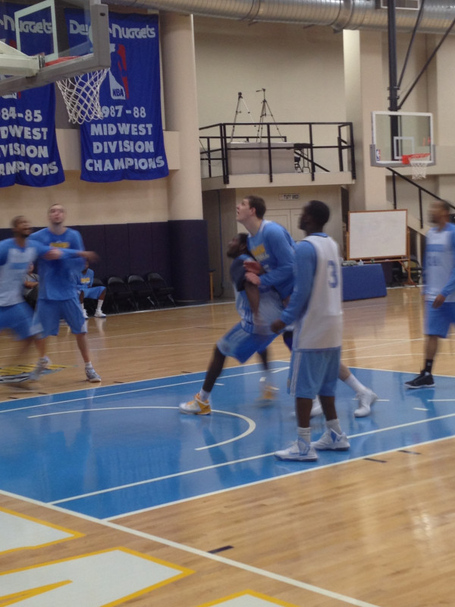 Faried boxing out Timofey Mozgov at Nuggets practice on Jan. 24th.
With the next game coming Sat., Denver has plenty of practice time.

What types of adjustments get made in the locker room at halftime?

Timmons' notes: Consider the Jan. 15th win vs. Portland where the Blazers took a 57-54 lead into the half and Damian Lillard had 10 points. In the second half, Lillard scored just 6 points as the Nuggets defense focused in more on Lillard. Sometimes the adjustments don't work as designed as the Timberwolves showed on Jan. 3rd when JJ Barea and Luke Ridnour constantly got the right switch in the pick-and-roll and hurt the Nuggets in the second half with 27 points combined.

And if you really want to watch some sharp rotational defense; I've been told the Miami Heat are the best in the business.

Karl and the players have talked about the importance of communication on defense and how it needs to get better. Who is the quarterback on the Nuggets defense?

Iske: We're still searching for that a little bit. It's easier for your big guys to be that quarterback because the majority of the time the big men are running up and setting screens on the guards [in pick-and-rolls]. So, they are the ones that can kind of sit back behind the action and see what is coming. It's really important that your bigs can vocalize what is coming because the guards have their backs turned to a lot of stuff that is going on behind them, when they are up on the ball. We're always trying to emphasize to our bigs to talk early and often. Let everybody know what is going on behind them and quarterback it from there. It's a learning process for all of our bigs.

Timmons' notes: If you can recall, Kenyon Martin was a very vocal defense presence during his time in Denver. Can Kenneth Faried develop into that type of barker on the defensive end? It would be nice since Karl likes to use the Manimal in crunch-time.

What kind of versatility do the Nuggets now possess when Andre Iguodala, Danilo Gallinari, and Wilson Chandler are on the floor together?

Iske: It opens up our ability to switch things, which is an added dimension because your confident with all three of those guys guarding positions one through four on a lot of nights. You don't have to get caught putting two guys on the ball - you know, if they move the ball well then you're [caught] in rotation and trying to scramble to their shooters or scramble to their players on the weak side. When you have that ability to switch it makes the other team play one-on-one, which might not be what they want to do. It might take them out of what they do well. It gives us options to play to their actions in different ways.

Timmons' notes: This is exactly what I was hoping to hear as all three guys are really small forwards. The Nuggets use Iguodala to guard anyone from point guards to guys in the post. Gallo has been enjoying a fine defensive season and Chandler has shown he can stay with guards and even get in the post against the likes of David Lee.

By switching with those three, as Iske points out, the Nuggets won't have rotation breakdowns because no doubling or recovering to the open man will need to take place.

Are you excited to have Chandler back in the rotation from a defensive standpoint?

Iske: Wilson has been a pleasant surprise for us ever since he has been here, with his defensive versatility and abilities. He has an awareness to help on the strong side when he's on the weak side, he's a very good defensive rebounder for us, and he's a surprising athlete. He can be an influence on guys going in [to the paint] with his shot blocking as well. He adds the athletic and wing dimension to a guy who can play a big spot for you.

Timmons' notes: In the second half Chandler entered the game against Houston with the score tied 52-52. He came up with three big steals that resulted in a Gallo three-pointer, Chandler hitting two free throws, and Brewer going 1-2 from the foul line and a Nuggets 78-62 lead at that point.

With Andre Iguodala coming to the team, has he or do other players offer suggestions about what they want to do on defense or what they are comfortable with on defense?

Iske: One thing with George [Karl], he's always open to what his veterans and his key players want to do. A lot of times there is give-and-take of, ‘Hey, here is what we are going to see tonight. Would you guys rather do this or would you rather do that?'

It's not so much a dictatorship of, ‘This is the way we are going to guard it.' Sometimes that's the way it is, but a lot of times he wants to get their input on how they want to do it because he wants them to feel comfortable. And he wants them to take ownership over the defense.

Timmons' notes: This is one of those instances where you wish you were a fly on the wall. It would be awesome to hear players and coaches talk X's-and-O's.

Timmons: How do you feel the Nuggets defense is progressing this season?

Iske: It's kind of like our season in general: it's up-and-down. We go through really good stints and then we have a few games where we seem to regress. It's kind of like two-steps-forward-and-one-step-back type of thing, which I think is common for a lot of young teams and a lot of teams in the NBA in general. We think we are making progress, maybe not as quickly as we like sometimes, but we're going in the right direction.