The Nuggets play the first of four games against division rival and the West-leading Oklahoma City Thunder tonight. The Nuggets will play the Thunder again in Denver in just four days, so these increasingly bitter foes will become well acquainted with one another very soon.

After tonight's game, believe it or not, the Denver Nuggets are already halfway through the regular season. With the majority of the most difficult road schedule in decades behind them, the Nuggets will look to take the second of their three January road games after a sweet victory at the Lakers.

While it was certainly nice to add to the Lakers' woes with the recent victory at the STAPLES Center, one gets the feeling that the Lakers are in the process of a long, steep decline. There's instability at the head coaching position (having gone through Mike Brown, Bernie Bickerstaff, and now the embattled Mike D'Antoni), the team is old, there's no bench... it's just not the same Lakers of old. Doesn't mean it doesn't feel great to beat them, but they're not even a playoff team this year.

Meanwhile, the Thunder's meteoric rise behind dual All-Stars Russell Westbrook and Kevin Durant has been astonishing. Although Westbrook has his warts with poor shot selection and an orcish-like temperament on the court, Durant's quiet intensity has taken the Thunder to the next level. Currently leading the Western conference at 30-8, the Thunder have been beating opponents into submission in OKC all season. Strangely, their three home losses came to the Atlanta Hawks, Brooklyn Nets and Memphis Grizzlies - not exactly the first teams you'd think of when you think "home loss for the Thunder". Then again, nobody looks at the Minnesota Timberwolves and thinks "home loss for the Nuggets" either.

But I digress. The Thunder are beatable at home, but the Nuggets will have to dig deep into their energy reserves after a gritty home win against the Portland Trailblazers last night.

- Kevin Durant is going to get his points. Averaging 28.9 points, 7.6 rebounds, and 4.2 assists, the "Durantula" is a terror driving the lane, can get unconscious behind the arc, and will make the Nuggets pay dearly for every missed rotation. He's continuing to get better and at just 24 years old looks to be a thorn in the Northwestern Division's side for many years to come. While I do think that rotating Andre Iguodala and the newly minted 2013 Wilson Chandler on Durant will slow him down some, as a wise man once said: you can't stop him, you can only hope to contain him.

- Russell Westbrook is perhaps the Thunder's most exploitable player, but also its most dangerous alongside Durant. If the Nuggets let Westbrook get rolling through easy layups and fast break points, they may as well wave the white flag, because there's no stopping both he and Durant. Yet at the same time, if Lawson and Corey Brewer can frustrate Westbrook with hard-nosed trapping defense, he's very prone to taking horrible shots and turning the ball over. It's not unheard of for Westbrook to shoot the Thunder out of games because he plays with a Kobe-esque chip on his shoulder after getting fouled and frustrated. The Nuggets should try and get in his head early and see what happens.

- Serge Ibaka / Kendrick Perkins - Serge "Iblocka" Ibaka is one of the most difficult post defenders to play against in the NBA. His huge, JaVale McGee-like wingspan and high basketball I.Q. allow him to patrol the paint and block shots with authority - where the Nuggets make their cheddar. Ty's gotta remember one thing, and that's how you drive on a shot blocker: take it into their body. If he fades and steps back or tries a stutterstep layup, he's more than likely to get his shot blocked into the first row. Meanwhile, I liken Perkins to the Todd Bertuzzi of the NBA (okay, maybe Andrew Bynum is the only one to truly fit this comparison) - he's an enforcer, not afraid to take hard fouls and he'll smash the Nuggets on every opportunity inside. Kenneth Faried and Kosta Koufos must work hard to exploit this offensively challenged frontcourt and not let their physical play take them out of their games.

- Kevin Martin, acquired for the dynamic James Harden, has to be carefully shadowed by the Nuggets' athletic wings all night. He's capable of scoring from anywhere on the floor, and his crafty playmaking ability and All-Flop team credentials make him a threat to get the Nuggets in foul trouble early. While he's dangerous, if the Nuggets can force the Thunder to try and win on the back of Martin, I can live with that.

Keys to the Game:

- Freebies! - The Nuggets continue to wallow in misery at the line, hitting just 68% from the charity stripe. This is unacceptably bad for a team that lives in the paint and shoots as poorly as the Nuggets do from 3. With just a few more made free throws per game, the Nuggets might have one of the largest point differentials in the Western Conference. Oh, and don't look now - but the Oklahoma City Thunder are the best in the NBA at the line, shooting 84% - and hold the best record in the league. Free points, Nuggets. You're leaving them on the court.

- Physical Composure - Oklahoma City does not present the same matchup problems for the Nuggets that many other NBA teams do, lacking a true post presence to exploit the relatively soft Nuggets frontcourt. However, they can match the Nuggets' athleticism and willingness to play rough and tumble in the paint behind Ibaka and Perkins. We've seen this Nuggets team get taken out of their game this season when they're hacked and shoved, especially in front of a hostile crowd, and there's perhaps no crowd more hostile - except perhaps at the Rose Garden or Oracle Arena - than the college-like sold out atmosphere of OKC home games. Keeping the turnovers down and the high percentage shots up will go a long way to making this a winnable game.

- Found Money - While many Nuggets fans wrote off Wilson Chandler as trade bait, having already missed 34 games this season, he's come back to some great performances in the last two games. He looks like a completely new player and is playing perhaps better than he has since his time with the New York Knicks. He's played excellent defense and provided a much needed set of cojones for a team that's shrunk from the spotlight at times. I'm enjoying his commitment to defense, and if he can just cut down on some contested 18 footers, he'll rapidly earn more time in the rotation.

Tonight looks to be one of the biggest games of the year for the Nuggets, even on a back to back, and it would be an enormous feather in their cap to take down the best team in the NBA on the road.

***Note: Tonight, I would like to try a single gamethread to see if we can avoid people getting "stuck" in first half threads and see how it does. I'd ask for people to keep large images and gifs to a minimum.*** 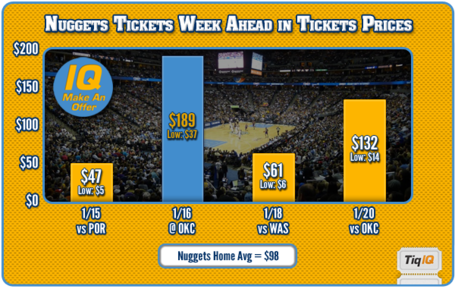