Inside the numbers: Danilo Gallinari

"I don't understand why you like Gallo so much." That is a statement that often gets directed my way.

Share All sharing options for: Inside the numbers: Danilo Gallinari

Not a week goes by where there isn't at least a mention of trading Danilo Gallinari for a myriad of players, most of whom would make the Nuggets worse in both the long and short run. Many of these trade "targets" are players whose cache far exceeds their actual production, so it's no wonder why some might want to obtain them for a guy who occasionally disappears or even worse, throws up absolute stinker games.

For my first article, I'll make an attempt to use some of the more readily available statistics to explain just what Masai Ujiri and others see in Gallinari. Rather than focus on individual plays or games, I'd like to take a look at his complete body of work this season.

Gallo's career per-game bulk numbers are rather average: 14 points, 4.8 rebounds, 1.8 assists, 42% shooting. Yawn. It isn't until you start to delve more into his advanced statistics that his value becomes more apparent. Here are some of Gallo's basic advanced numbers this year vs. the average wing (minimum of 25 minutes per game) courtesy of hoopdata.com :

You can get a feel for his offensive value from these numbers. The four that stand out are his USG, %Ast, AR, and TOR. His shot creation (USG) is a little higher than average while his assisted shot rate (%AST) is lower. This means that Gallo has been better than average at getting a shot for himself without the help of a teammate creating the look. With respect to playmaking, he has a relatively low Assist Rate (AR) (for a wing, but average for a SF) but also sports well below average Turnover Rate (TOR). So even though he's not creating shots for teammates as much as the average wing, he's also turning the ball over far, far less. This is crucial because turnovers are the absolute death knell of an offense, particularly one that gets value from offensive rebounding.

How about Defense? Unfortunately it's very difficult to quantify how good a player is defensively using statistics, but we can get a pretty good idea by looking at data available to the public. Mysynergysports.com has been tracking every basketball play for the past few years, and using this tool we can get a general idea of how Gallo has performed in certain situations:

Overall Gallo ranks 123rd in the NBA at 0.83 points per possession on defense, which is quite good considering that rank is in comparison to every player in the league, regardless of position. For reference Rudy Gay is 237th, and noted defenders Luol Deng / Thabo Sefalosha are tied 150th. From these numbers it would seem that Gallo is very good in isolation but solid overall, ranking no worse than 115th across all categories.

The problem with using Synergy numbers is that they don't tell the whole story. Synergy only tracks plays that end in field goal attempts, turnovers, or free throws. They aren't going to show things like if a player is late to rotate on a shooter but that shooter passes to another player for an easier shot, or if a player doesn't box his man out and allows for an extra possession. I'm sure there are smart men who work in front offices that do track this information, however I have not seen it available to the public.

We can somewhat track this by using +/- statistics, and this is where Gallo's numbers really start to shine. Theoretically if a player looks good in Synergy but fails in other aspects of defense, it should show up in his On/Off numbers. Here are Gallo's +/- numbers according to 82games.com: 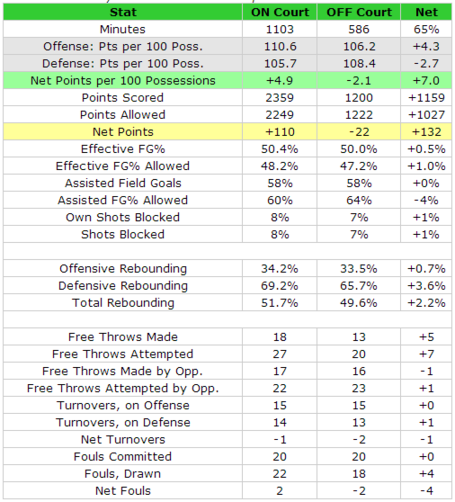 Now we're talking! What we can see is that defensively the Nuggets allowed 2.7 fewer points per 48 minutes when Gallo is on the court, and score 4.3 more points for a net total +7. What I'm most impressed with here is the rebounding stats. With Gallo on the court, and this includes approximately 40% of the time at power forward, the Nuggets are out-rebounding their opponents by a decent margin, especially on the defensive glass. Someone mentioned on another website how good Gallo was at boxing his man out, and the above data would support that.

There is a caveat to +/- statistics, and shouldn't be looked at in a vacuum. They don't take into account the individuals who share the same position, nor do they account for the guys who typically share the court with Gallo. For example if your Mario Chalmers and you play most of your minutes with Lebron James, and then have Norris Cole as your backup, your numbers +/- are going to look pretty inflated compared to when you backup plays without James on the court with him.

Adjusted +/- takes into account both teammates and opponents on the court, and regularized adjusted +/- takes it a step further. I couldn't begin to explain how these are calculated, but there is a good primer on the Golden State of Mind SB Nation blog right here. I like this stat the most because it theoretically shows how a player affects his team on both sides of the court, and that's whats most important right?

If we look at Gallinari's RAPM over this year in comparison with other players in the league, Gallinari ranks a +1.7 offensively and a -1.5 defensively for a total of 3.2 (courtesy of http://stats-for-the-nba.appspot.com/). That ranks 29th in the entire NBA! And if you factor in wings only, here's how he ranks:

Not only is Gallo sandwiched between some serious star power, but he happens to be one of the least expensive players of this bunch. Now this does not mean Gallo is better than Kobe or Melo, but it does show that perhaps Gallinari is more valuable than his bulk stats would lead us to believe. What sticks out here is that Danilo is the only player that's equally positive on defense and offense, which is probably the reason he gets underrated. Players are typically lauded for being excellent offensively (Melo) or defensively (Tony Allen), but rarely is a player who's simply "good" at everything appreciated to the extent they should (Nene anyone?).

So that's why I like Gallo so much. He's a good offensive player, good defensive player, has no real weaknesses, is versatile, young, and relatively inexpensive when compared to players of similar position and equal production.

Not bad for a guy who was just a piece (albeit the cornerstone) of the package the Nuggets received for Melo.