Golden Nuggets: The Importance of the Three Ball

Share All sharing options for: Golden Nuggets: The Importance of the Three Ball

But with the departure of J.R. Smith and Chauncey Billups in recent years, the Nuggets have declined perilously in both their ability to score the rock from downtown and defend against it. So what's so important about the three point shot?

Last season, the Nuggets shot an ugly 33% from 3, tied with the Minnesota Timberwolves for 23rd in the NBA. Only the Grizzlies, Lakers, Jazz, Wizards, Kings and Bobcats were worse. Perhaps even more disconcerting is the fact that the Nuggets ranked dead last (30th of 30) in defending against the 3, allowing their opponents to shoot an average of 38%. Last year, the league average from deep was 35%.

Why does this matter? The three point shot is worth 50% more than a two point shot, and thus spawned the creation of the stat "effective field goal percentage" or "eFG%". Basketball-reference defines eFG% for us more specifically:

The formula is (FG + 0.5 *3P) / FGA. This statistic adjusts for the fact that a 3-point field goal is worth one more point than a 2-point field goal. For example, suppose Player A goes 4 for 10 with 2 threes, while Player B goes 5 for 10 with 0 threes. Each player would have 10 points from field goals, and thus would have the same effective field goal percentage (50%).

To put it another way, a player who shoots 33% from beyond the arc is as efficient as a player who shoots 50% from 2 point distance (which is a much tougher thing to do). So, in both shooting the ball relatively inefficiently and giving up a much greater average number of three point shots to their opponent, the Nuggets are harming themselves on both ends of the floor. If they can shoot even a few percentage points better as a team, their already stellar offensive efficiency (3rd in the NBA) should increase further. We can only hope that Andre Iguodala's presence will bring them up from the cellar in three point defense.

As the following excellent chart shows, there's two important components to the three point shot: how many you attempt (relative to overall attempts) and how many you make: 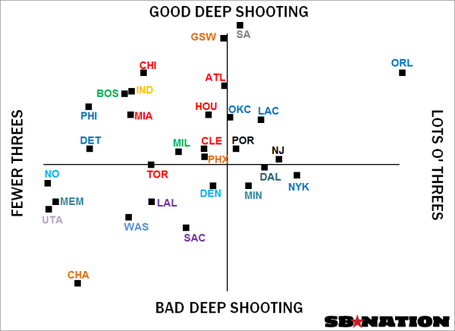 New Orleans and Charlotte were the best at recognizing that they were not so good at shooting threes (and so didn't shoot many), whereas Orlando took the most by far and was actually even relatively efficient at doing so. Denver was pretty terrible at making threes, but also just kept shooting them.

Ideally, the Nuggets would follow the San Antonio Spurs model: take a fairly middle-of-the-road approach with an average number of attempts, but be efficient in making them. Unfortunately for us, the Nuggets' best (40%) three point shooter - dearly departed Arron Afflalo - left in the trade which brought in Andre Iguodala. However, he also took Al Harrington with him, who took by far the most threes on the team (303) and only made a sub-average 33% of them. So, at the very least, the Nuggets should see a leftward shift on this chart, and hopefully an upward one as well.

Appallingly, Corey Brewer ended up taking 127 three pointers and made just 33. As I've noted in the past, the Nuggets might be better served if he stopped shooting outside of fast break dunks altogether.

Going forward, Jordan Hamilton and Andre Iguodala must fill Arron Afflalo's workman boots. Last year, Hamilton was third best on the team in shooting threes at a 36%, just behind Ty Lawson. Andre Iguodala shot an incredible 39% last year with Philadelphia, far above his average 33%, connecting on 76 of 193 attempts. If Iguodala and Hamilton can maintain their above-average percentages (and Danilo Gallinari returns to his typical 37%), the Nuggets should markedly improve in both shots made and their efficiency.

Taking and making threes is going to be even more important this season for this Nuggets squad than it has been in the past. In previous seasons (like last year), many teams stuffed the paint, daring the Nuggets to brick the open 3, which they often did. If the Nuggets can command respect on the perimeter with an at least league average 35%, that will open far more opportunities to attack off the dribble and create free throw attempts or high-percentage twos for this insanely athletic team. When the Nuggets start catching fire, their opponents are going to be left with a tough choice: do they close out on Hamilton and Iguodala and thus be repeatedly dunked on by JaVale McGee and Kenneth Faried, or stuff the paint and let Danilo Gallinari and Lawson drill it from deep?