The deadline for NBA teams to use the amnesty clause for the 2012-13 season ends today at 3:00 p.m. mountain time if you believe David Aldridge or midnight tonight if you believe Marc Stein and Larry Coon. At about 8:45 p.m. last night, Gary Woelfel of The Journal Times (Milwaukee, WI), sent out this tweet, "Hearing Nuggets seriously discussing amnestying Chris Andersen. He has 2 years, $9M left on contract." I had the pleasure of meeting Woelfel in Las Vegas and he had a good relationship with George Karl, from his days with the Bucks. Rumors swirl like wildfire at Summer League, so one can't pin down his actual source.

Andersen and Al Harrington have been the two names discussed with the amnesty clause by Denver pundits and fans. But with Harrington still being a key contributor to the team, it would take a shocking turn of events to see Denver cut him loose. And add to the fact that Harrington's final two contract years are not fully guaranteed, thus making a buyout with him possible after the 2012-13 season if he's unable to get back to form after his surgeries on his knees this summer (a not so grand picture of a post-surgery Harrington here, from yesterday).

More after the jump...

While Birdman's contract isn't an atrocious one, the numbers game is leaving him as the odd man out. Denver currently has 14 players under contract for the upcoming season and at least two more players to add to the roster in JaVale McGee and Quincy Miller. And things get even more interesting as unrestricted free agent Anthony Randolph, 23 years-old, was sitting with Nuggets' players and front office folks at Denver's first Summer League game in Las Vegas.

Randolph is a 6'11'' and 225 pound lefty who has averaged just 7.4 points per game, 3.6 rebounds, and 1 block per game in his four NBA seasons. During his second season (with the Warriors), Randolph averaged a career high 22.7 minutes per game and produced 11.6 points, 6.5 rebounds, and 1.5 blocks per game in just 33 games. He was taken 14th overall by the Warriors in the 2008 draft and has never quite lived up to the big time potential NBA minds have seen in him. But at just 23 years-old, he could be a nice fit for the Nuggets, who could coach him up and give him some structure -- but he needs playing time. 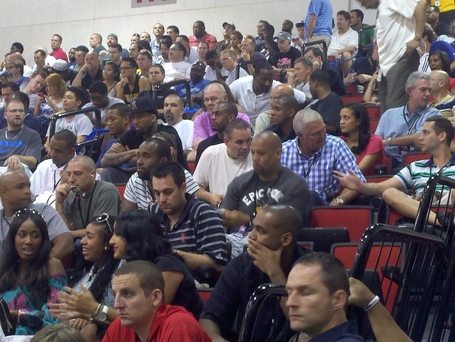 With a roster maximum of 15, what are the Nuggets to do?

Well, according to Larry Coon's NBA Salary Cap FAQ, the Nuggets could tender a contract to Quincy and he could turn the deal down and play overseas or in the NBA D-League. Since the Nuggets offered him a contract and he chose not to sign it, they would still own his player rights and could attempt to sign him again next season.

When Quincy fell to the Nuggets with the No. 38 pick in the 2012 draft, I was ecstatic. He has a lot of talent and has shown some flashes at Summer League with his shooting, offensive rebounding, and ability to get to the foul line (and knock down freebies). Miller must decide if it would be best for him to sit on the Nuggets' bench next year or if playing overseas or in the D-League would help his development more.

We'll know a little more about what the Nuggets plan to do today, as the deadline to amnesty a player, this season, is set to expire.

As Charlie from Roundball Mining Company tweeted last night, Stone's hip injury is a pretty serious one. He could be facing, at least, a five-month recovery process as he underwent a similar surgical procedure as Wilson Chandler. He hasn't been with the team in Las Vegas as he already underwent surgery and is in the recovery process. Stone's contract isn't guaranteed and he could be waived by the Nuggets, which would open up a roster spot. Denver could still amnesty Birdman and that would open up spots for Randolph and Quincy with McGee already expected to be on board.

Stone was going to be the man running the Nuggets' offense this week in Las Vegas and it was a major disappointment that an injury prevented him from being able to do so. His defense was a strong point last season and he saw a little time because of it. This was to be his first extended time to shine, but the Nuggets know what they have in Stone.

The Nuggets have struggled offensively without a true point guard, with experience, in their first two games in Las Vegas. Keeping Stone around might be a move the Nuggets don't have the luxury to afford anymore. Stone had been working his tail off this summer and you can bet nobody is more frustrated than he is about missing valuable time.

Could the Nuggets be eligible to use the Disabled Player Exception with Stone?

The NBA doesn't have a very grand injured reserve program in place. But it's possible that the Nuggets could petition the league to gain what is called a "Disabled Player Exception". It can only be used for teams over the salary cap, which the Nuggets could be after they re-sign JaVale McGee.

DISABLED PLAYER EXCEPTION -- This exception allows a team which is over the cap to replace a disabled player who will be out for the remainder of that season (it can also be granted in the event of a player's death). This exception is granted by the league, based on an application from the team and a determination by an NBA-designated physician that the player is substantially more likely than not to be unable to play through the following June 15.

If this exception is granted, the team can acquire one player, via either trade or free agent signing, to replace the disabled player:

Teams can apply for this exception from July 1 through January 15, and cannot apply after January 15.

Since Julyan Stone only makes $762,195 this coming season, I don't see this clause as being any sort of option for the Nuggets. Just good to know there are loopholes or provisions for just about every scenario in the NBA.