There are two ways you can view the Nuggets upcoming first-round pick. One, take the player you think has the best shot to become something special with a little seasoning. Two, draft a player that might fit into your team right now. Sam Amick of Sports Illustrated doesn't have Quincy Miller going in the first round in his latest Mock Draft. Could the Nuggets get lucky and snag Miller with the No. 38 pick? Not likely.

So, the dilemma ... draft Miller at No. 20 and hope that his potential is real or ... go a different route. Whatever the Nuggets decide to do (and the smokescreen they are creating is a fantastic one), Quincy Miller will be hard to pass up.

If have yet to watch some Miller highlights, you should take a moment and watch the ones on Draft Express here. At first you'll fall in love with his game. He has that silky shooting motion, a plethora of moves around the paint, and the length to be a solid rebounder and shot blocker. One could draw quick comparisons to Kevin Durant, even Miller himself says that he mirrors his game after the man he calls "KD".

But later in the "highlights", Miller's low-lights are also shown. His body doesn't yet have the strength to battle the big guys down low, his shooting form can lead to inconsistent nights, and he isn't totally comfortable with his own body, yet. Do the Nuggets have the luxury to take a gamble on a guy with a team in need of a little more? Would the Detroit Pistons have been better off taking Carmelo Anthony over Darko Milicic? Potential can be a dangerous temptation.

Miller played his part for the media, answering questions about his knee (he tore his ACL his Senior year of high school), and saying he wanted to be a Denver Nugget. Miller didn't wear any sort of knee brace at his workout today and he did seem very sincere when he said he hopes he winds up in the powder blue.

Quincy was kind enough to field some questions from me. My questions are bold below.

Quincy: I'm not sure, I haven't decided yet. I might go to New York or I might just stay home.

Nate: Where do you learn your post moves, you have that nice up and under?

Quincy: I watch a lot of KD (Kevin Durant) because that's one of KD's signature moves. It was in college (at Texas), his double step up-and-under. I watch a lot of different post moves, so if I do one post move I have the counter to it. I know a lot of counters and a lot of post moves.

Nate: On an off day, if you do come to Denver, what can your fans find you doing?

Quincy: Probably playing a game or I'd probably be at a water park, like Six Flags, or playing videogames, or going out to eat.

Nate: Do you plan on wearing a certain number in the NBA?

Quincy: Whatever number I get drafted. Either that or I'll wear my sister's number that passed away. She wore No. 22.

I thought it was a great tribute for Miller to wear his sister's number. He had on No. 22 today at the workout in honor of Keisha Miller, who passed away in a car accident in 2005 at the age of 17.

Miller grew up in Chicago, Illinois, but wound up moving to North Carolina to get away from some bad influences in his life and to pursue basketball. He said he talked with George Karl about Carolina and joked that Ty Lawson was putting a bug in Masai Ujiri's ear for the Nuggets to draft the Baylor kid.

I got a good feeling from Miller. He was very gracious, honest, and happy to chat with whoever wanted to speak with him. One can't help but to think where he would be drafted if he went back to Baylor for a Sophomore season and I'm sure that's a question the Nuggets brass are thinking about. This kid has his pick of colleges, Duke among them, and could be a real steal for the Nuggets. The major sticking point is that with Danilo Gallinari, Wilson Chandler, Jordan Hamilton, and Corey Brewer looking for minutes - where would Miller play? Luckily for us, we don't have to make those tough calls.

If Ujiri can figure out a way to keep the No. 20 pick and get Quincy Miller with perhaps a late first-round pick (a la Kenneth Faried No. 22 and Jordan Hamilton No. 26), then the Nuggets might be walking away with another brilliant draft. 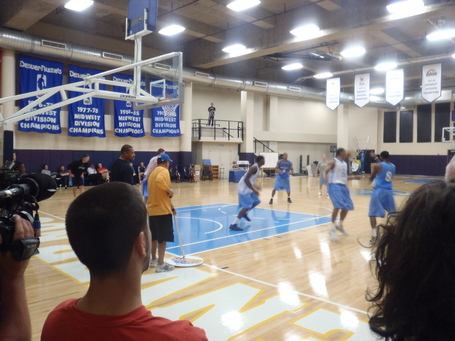 I was talking with Nuggets assistant coach Melvin Hunt when this exchange occurred. Masai Ujiri was walking over towards us, I told Hunt that our readers (you!) at Denver Stiffs call him, "Batman". When he asked why I told him it's because he is secretive and strikes when nobody is looking. When Ujiri came over, Hunt relayed that nickname to the GM and Masai acted shocked and said he wasn't secretive and that, "I'm right here." Hunt told him, "That's just your Bruce Wayne!"