Well, it didn't take long for this writer to become a nervous wreck. Watching the Dallas Mavericks try (and fail) to pull out a game in Oklahoma City last night got me ready for playoff basketball. Every possession seems bigger, each rebound looms larger, and every shot will have me moving to the edge of my seat. Dig in. Let's examine the match-ups for today's game that airs on ABC at 1:30 p.m. mountain.

The funny thing about this series. Neither team really knows what they have. During the wacky and wild 66 game season, each team spent time trying to find their identity and dealt with injuries along the way that may have helped shed some light on some different players.

For the Lakers, they dealt with Kobe Bryant being out of the lineup for eight games and that led to Andrew Bynum emerging as perhaps the best big man in the game. C.A. Clark, from SS&R, talks about the Lakers season here:

Erratic. So, so erratic. The Los Angeles Lakers may have ended the year third in the Western Conference, but lost out only to the New York Knicks when it comes to insane twists and turns over the course of the regular season (and the corresponding media following to cover said twists). From the pseudo-trade for Chris Paul to the very real trade of Lamar Odom for nothing (a trade which, sadly, appears to have been justified), from the early season struggles (in which all but the top four players were, statistically, among the worst in the league) to the post trade-deadline rennaissance following the acquisition of Ramon Sessions and the re-discovery of an energized Metta World Peace, this has been one wild ride of a season. And just when you think you've got a handle on this bizarre Lakers team, Andrew Bynum jacks a three pointer or MWP cracks James Harden's head. Never a dull moment.

Like I said ... crazy season for both teams. Pick a player on the Nuggets' roster - they've all seen time on the injury report.

Point Guard: Ty Lawson vs. Ramon Sessions
Finally, the Lakers have a young point guard running the show. Sessions, 26, came over in a trade with the Cleveland Cavaliers and has been pretty good for the Lakers averaging 12.7 points and 6.2 assists for them. Not known for his defense, he can create on the offensive end and get the job done himself if need be. Not a volume shooter from beyond the arc, but a deadly one at 44% on the season. Sessions is a very capable passer and like Lawson, he is at his best when he's attacking the paint.

Lawson, as George Karl stated, is the key for the Nuggets ... has been all season. When Lawson is engaged on offense - the Nuggets are very tough to beat. Lawson isn't the most creative passer, but he has been working on his lobs (maybe watching fellow teammate Andre Miller?) with Kenneth Faried and has his greatest success when he's attacking the basket. Lawson doesn't always finish with his left hand at the rim, but when he does it makes his shot even harder to block. Ty has developed more of an all-around offensive game this season, working on his mid-range game. Defensively, he can get lost on picks and his size doesn't allow him to bother a lot of shots, but he does a good job of pressuring the ball.

Advantage: Slight edge to the Nuggets.

Shooting Guard: Aaron Afflalo vs. Kobe Bryant
Kobe is still Kobe. He's deadly from everywhere and don't be surprised to see him attacking the rim and finishing in traffic - it may not happen as often as it used to, but he'll muster the strength to attack when he needs to. I still hold onto my lunatic theory that Bryant wears one of the baggiest jerseys in the league to help him draw fouls (seriously, check out how loose his jersey is compared to everyone else today).

If Lawson is the No. 1 key to the Nuggets, then Afflalo will be key 1A in this series. He not only has to defend Kobe, but he'll also be leaned on to score in bunches for the Nuggets. Averaging 17 and 18 points in the final two months of the season was a college semester of sorts for AAA and now it's finals time - the big test! I'd love to say this match-up is even, but it's up to Afflalo to make it so ... Advantage: Lakers (but it's not as big as you think).

Small Forward: Danilo Gallinari vs. Devin Ebanks
Ebanks, really? I wonder if Matt Barnes can prove to be healthy (ankle issues) if he'll eventually usurp the starting role from Ebanks in this series? Just 22 years old, Ebanks doesn't bring much to the table. He is long, at 6'9'', and physically reminds folks of Trevor Ariza (shivers through Nuggets Nation), but he shoots the three a lot worse at 0% on the season and is only a 41% shooter on the season from the field. A space eater on offense, but a long body on defense, the Nuggets can't afford to let him be any sort of factor in this series ... meaning, don't give him the open looks that he will need to gain confidence.

Gallo, Gallo, Gallo ... I should have let Jeff Morton come in and sing the Italian's praises. Gallo can't afford to be the Disappearing Man in this series, not with Metta World Peace watching from home. A rough and tumble series for Gallo was in the cards with Ron Artest, but now with him gone - Gallo needs to exploit the Lakers lack of options to defend him. Too often we'll see Gallo fall in love with his jumper and flop his way around the paint. He needs to attack with aggression and let the fouls come to him, I have a feeling the refs wont be buying the flops he tries to sell. Danilo is a tremendous passer and dynamic scorer, if he plays up to his abilities he could win this series for the Nuggets. Advantage: Nuggets.

Power Forward: Kenneth Faried, the Manimal vs. Pau Gasol, Pauerwheels
Gasol is a bothersome player. He can hit outside jumpers all day, rebound like crazy with his positioning, and kill teams at the free throw line. A true 7-footer will give fits to the 6'7'' Faried. Lots of folks are pointing to Bynum and Bryant as keys to a Nuggets victory, but don't forget about Gasol. He may be slowing down just a bit, but he's still a top player at his position and a dangerous weapon. I'd still like to shave his entire head and face and see the return of this guy: 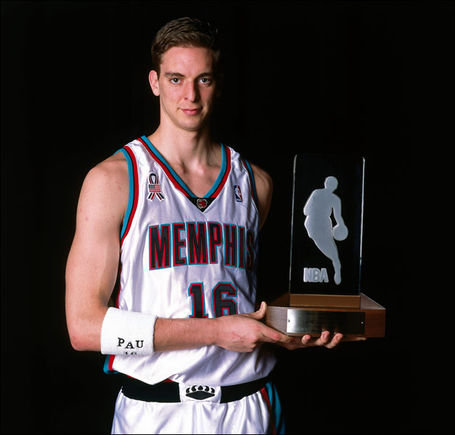 Faried cannot be shaken. This rookie has a game that doesn't rely on shooting ability and I don't see his energy being shaken by big games. He has a game that relies on energy and instinct, but he'll need to be aware of boxing out in this one. The Lakers are so long that plays may feel like over the back, but it's just really tall guys reaching a little bit. I don't know how effective Faried will be, but I think he could have a monster series out in transition and even in the post, if he's moving the way he has been all season. One quick move and Faried can blow by many a defender ... especially the heavy footed Gasol. But still ... Advantage: Lakers.

Center: Nene (for the ESPN "experts") Kosta Koufos vs. Andrew Bynum
Bynum is a beast, a true man among boys when he's on the floor at 7'1'' and 285+ pounds. It would appear the Nuggets are going to play a dangerous game of double-teaming the big guy as much as possible. The Nuggets have had very bad results by doubling guys. Their rotations are often slow or non-existent and giving role players in the NBA wide open shots has not been pretty for a Denver team that has allowed the highest three-point percentage for opponents this season (38%). Will Karl rotate Koufos, Timofey Mozgov, and JaVale McGee like hockey players, as he stated? Will going for a different strategy than ever applied be useful to the Nuggets or just confusing? We'll find out in a few hours. Bynum can kill teams in the paint (where he camps for hours), hit some jumpers, nail free throws, and rebound like a mad-man. Kid is good.

Koufos has had his minutes jerked around all season. He went from riding the pine, to playing backup, to the injured list, and now to starting. With so many flying parts around him, K2 has been the mountain of consistency. He doesn't do anything flashy and he has been the steady presence the Nuggets have needed inside. Expect his minutes to be very erratic all series. Advantage: Lakers.

Bench: Andre Miller, Corey Brewer, Al Harrington, JaVale McGee, and Timofey Mozgov vs. Steve Blake, Matt Barnes, Jordan Hill, Josh McRoberts, and Troy Murphy.
I think the players above will see the bulk of the minutes off the bench for each team.

The Lakers bench sure doesn't scare anyone, but they have been pretty effective in spurts. Blake, a former Nugget, can be a thorn in the Nuggets' side all series if they give him the open looks he needs. A three-point threat and creative passer, Blake could wrangle some minutes away from Sessions if the youngster struggles. Barnes lit the Nuggets up in their last contest and was the difference maker in the Lakers win, without Kobe. Hill had a good game, in game 65, against the Thunder scoring 14 points and grabbing 15 rebounds. Another true 7-footer, Hill is much more athletic than Murphy (perhaps not McRoberts) and can create issues for the Nuggets when he's in the game. Murphy has lost his shot the past couple years, but he still shouldn't be left open.

The Nuggets bench looks sort of like a 35 win NBA team. Miller, Sea Brew, Big Al, McGee and Moz give Denver some nice depth. Harrington's knee gave him fits against the Thunder and he looked almost completely ineffective doing anything other than launching shots from deep. If Big Al can't provide his usual scoring pop and inside game, the Nuggets second unit loses a valuable contributor and Karl has loved using him to play center (Gah!) to close games. Miller is Miller still - Old Faithful or Old Reliable, Brewer can be used to slow down a hot shooter (think Kobe), and McGee and Moz could be very useful on the boards and in transition. Advantage: Nuggets.

Coaching: George Karl vs. Mike Brown
Both coaches have taken their lumps this season. Brown has the Lakers playing pretty fantastic defense and they look like they know how to slow down the Nuggets ... roll the ball around after made shots, get back on defense, and clog the lane.

Karl said recently that it's easier to coach in the regular season than it is the playoffs. Well, Karl's teams haven't fared well in the post-season in the Denver Era, so we'll see what Karl has in store for us in this one. It's a defensive minded coach against a free wheeling offensive mind ... Advantage: Even.

Who will win Game 1 in Los Angeles?

This poll is closed