RIP Dwayne Schintzius, the Denver Stiffs HOFer that never was ...

Share All sharing options for: RIP Dwayne Schintzius, the Denver Stiffs HOFer that never was ... 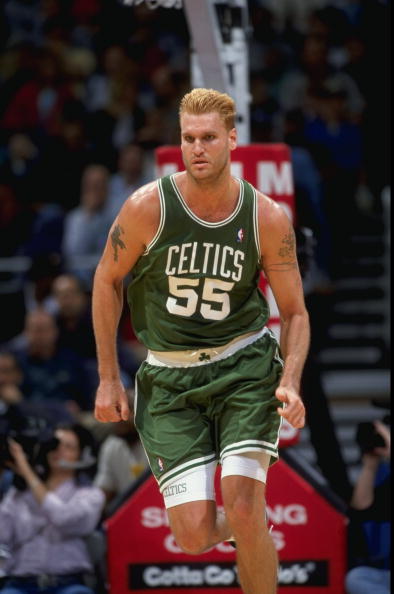 Courtesy of Ball Don't Lie's Kelly Dwyer, I just read that former NBA center Dwayne Schintzius died at the age of 43 this past weekend after a tragic bout with leukemia. Though Schintzius never played a single game in a Nuggets uniform, he did technically end his career as a Nugget in 1999-2000.

Had he played just a few games as a Denver Nugget, Dwayne Schintzius would have been a sure-fire future Denver Stiffs Hall of Famer. He fit all the criteria for a Denver Stiffs HOFer: tall, white, slow ... and he had a mullet!

After eight journeyman seasons with the Spurs, Nets, Pacers, Clippers and Celtics, Schintzius was packaged along with Popeye Jones (another possible Denver Stiffs HOFer some day) and Ron Mercer in a trade that sent Danny Fortson, Eric Washington, Eric Williams and a 2001 first round draft pick back to Boston. These were the good 'ol days when Nuggets "president" and "coach" Dan Issel would trade away future first round draft picks like they grow on trees.

Anyway, the last thing I want to do is make light of Schintzius' untimely passing. But seeing his name in the news today, it just reminded me of an era of incompetence that the Nuggets have - thankfully - left in the distant past.

For the zero games Schintzius appeared in as a Nuggets, he was paid $500,000.